Angels of Death 1×09 Review: There is no God in this world 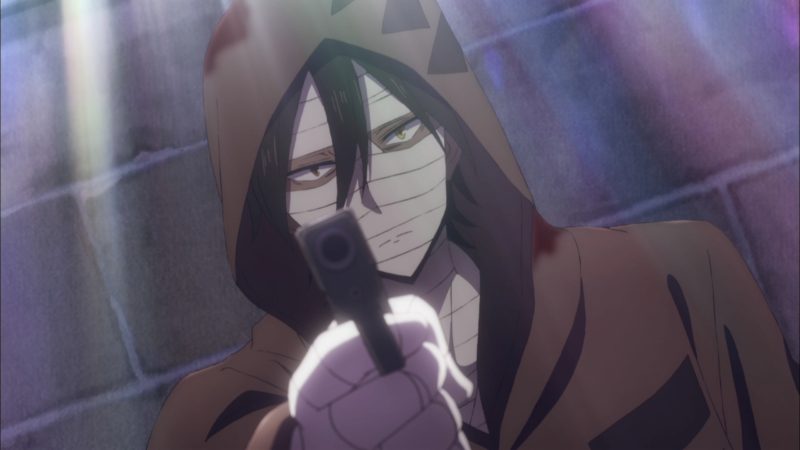 The last episode of Angels of Death ended in a cliffhanger. Someone who we thought was dead turned out to be very much alive. ‘There Is No God In This World’ continues where the previous left off, with Zack in a precarious situation and Rachel slowly losing her sanity.

‘There Is No God In This World’ starts with a confrontation between Zack and Danny. Both are not at all in good shape, having been sliced up by Zack’s scythe. Danny had thought ahead though and wore some kind of reinforced vest under his clothing, so his wound wasn’t as bad as it could have been. Zack and Danny both seems to possess copious amounts of blood. (For the horror effect, I’m sure)!

Meanwhile, Rachel makes one final stop to Zack’s floor before returning to him. He had asked her to grab his knife because with his wound, it was getting to hard to wield his scythe effectively. This scene for the most part follows the game exactly with the soda bottles, kid’s cereal, and bloodied bandages scattered around all over the place. But, there’s a poignant little addition in the anime where Rachel finds a book and some paper with letters and words written on it, with some of the words scribbled out. Considering how Zack grew up, he never learned how to read. So, it’s kind of heart-breaking to see that even while living in a building full of murderers, Zack was taking the time to try to teach himself how to write. That scene in particular was one of my favorites in ‘There Is No God In This World’. It was short, but gave a little more insight into Zack’s character. He’s not even close to just a mindless, serial killing monster. 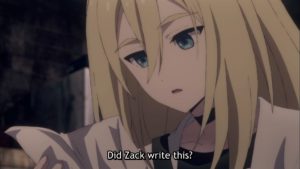 Rachel is continuing to fall apart mentally. Her motivations get called into question by Father Gray who calls her actions narcissistic. Which, yeah… it kind of seems like she is, considering some of the attributes such as taking advantage of other’s to get what she wants and not recognizing the needs and feelings of others. Her current goal is to keep Zack alive. But, not simply to keep Zack alive for Zack, but because she needs him to be alive to fulfill his promise that he made to God to kill her. Rachel won’t let anyone or anything stand in her way, so Zack dying would simply be unacceptable.

I do feel like there is more to Rachel considering that I have read the Angels of Death manga and completed the computer game as well. But, I think this is something that is quite apparent even with just watching the anime. Rachel’s starting to crack, and it looks like she’s also starting to care – maybe just a little bit – about Zack as a person. And certainly some of that is projection because it’s apparent that she sees some similarities between Zack and herself. Which is why she kept repeating that she and Zack were not tools, whether they live or die, whether they choose to kill, that is up to them and them alone.

Overall, I’m continuing to really enjoy this series. ‘There Is No God In This World’ (and the Angels of Death anime in general) does a good job of staying true to the source material while adding little things here and there that only enhance the story and do not detract at all in any way. It’s going to be a wild ride ahead. I can’t wait to see what happens next!