Book Review: “Beasts of the Frozen Sun” by Jill Criswell 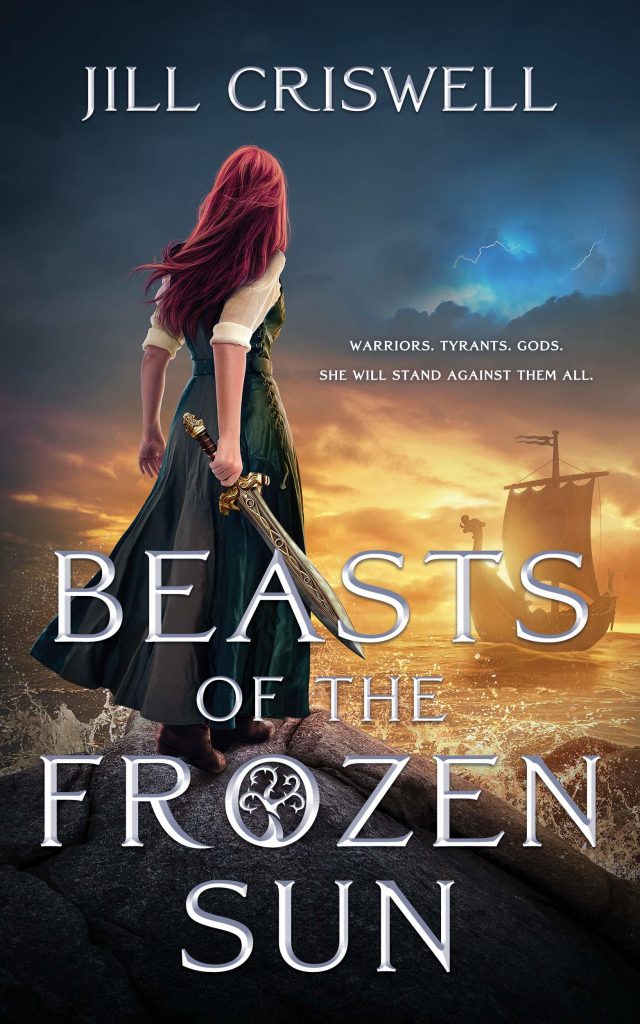 There is a lot of potential in Beasts of the Frozen Sun by Jill Criswell. It’s got the kernels of a good story, a picturesque setting, and an interesting magical system. I thought I would like it more than I did.

Beasts of the Frozen Sun is the story of Lira, daughter of the Stone clan chieftain, who has been “blessed” by the gods with the ability to see inside a person’s soul. One day a warrior from another land, Reyker, washes up near her town, and she nurses him back to health. She discovers he is different than the rest of his people – vicious marauders who attack her village and kill her brother. Lira helps Reyker escape, and the two of them are linked and determined to bring down the marauders’ leader, a cruel barbarian nicknamed the Dragon.

You don’t often see the Viking culture represented in young adult fantasy, and the political system outlined in this book – different clans and even completely different cultures – has a lot going for it. The plot has some decent political intrigue, and it wasn’t too predictable. The idea of “which gods are the true gods” and “what is the truth” isn’t original, but in this book it’s fairly well done, acknowledging that a belief system is based on faith; we generally believe what we’re told by people we trust until something comes along that challenges our way of thinking. In Lira’s case, it’s her various encounters with Reyker.

The problem with Beasts of the Frozen Sun is the lack of women. Lira is feisty and fierce and flawed and a perfectly fine heroine, but the vast majority of female characters in this book are props. They exist to be subjugated or killed or assaulted (rape is implied but never depicted on the page). The men are warriors and the women are captured. Lira only has two friends outside of her brothers – only one is another woman, and the man is, naturally, in love with Lira. I expect this is something that will be remedied as the series goes on, but it’s extremely off-putting that in a book with such a misogynistic culture, there aren’t more women who are treated like actual people.

As I said, there are nuggets of good things, but I was aching for more development. The magical system is incredibly interesting but vaguely defined, and honestly, I could have done with a map. I also had an issue with how cyclical the plot was. Throughout the entire book, either Reyker or Lira was getting captured, and then the other would attempt to rescue them and get captured as well, or they would escape and eventually get captured along the way. It was a little too repetitive for me, and I’m not sure I care about Lira or Reyker enough to continue with their adventure.

Basically, Beasts of the Frozen Sun is a perfectly adequate fantasy that has the potential to become an amazing series if the world can be fleshed out a little more.

Beasts of the Frozen Sun by Jill Criswell is published by Blackstone Publishing and will be available August 6, 2019, wherever books are sold.