Book Review: “This Is Where It Ends” by Marieke Nijkamp 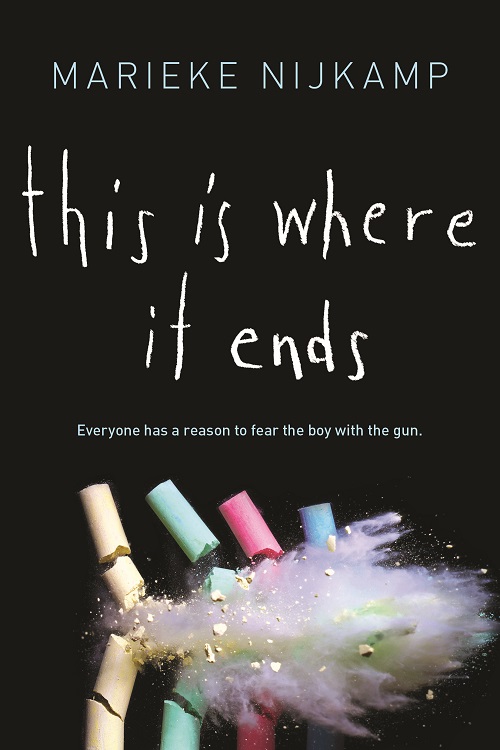 Everyone has a reason to fear the boy with the gun.

The students of Opportunity High School in Opportunity, Alabama, had no reason to think that today would be different than any other day. Then the auditorium doors didn’t open after their start-of-school assembly. Told from four different points of view, This Is Where It Ends by Marieke Nijkamp takes place over the course of one harrowing hour, where students and teachers are trapped with a former classmate determined to enact his calculated revenge one bullet at a time.

Author Marieke Nijkamp is the founder of DiversifYA as well as an executive member of We Need Diverse Books, so I expected a lot from this novel, especially when you look at the diversity of the principal characters. Two of the four narrators are Hispanic, three are female, and two are in a same-sex relationship. One of the non-POV main characters is Muslim. However, diversity means very little if it’s just on the surface, and sadly our characters are severely underdeveloped. Their differences don’t shape their characters; they are merely set pieces to the story, like the author was ticking off boxes on a diversity checklist. Sometimes it was difficult to tell the difference between the narrative voices, and the dialogue often felt stilted.

This Is Where It Ends had the potential to be a deep, introspective look at the psychology of a school shooting. It had the chance to really delve into the psyche of victim and shooter alike, but it fell spectacularly short of expectations. Since the book is narrated in real time, it doesn’t leave a lot of space for the characters to reflect on their situation – their entire focus is on survival. This book had a lot of telling but very little showing, which was, I’m sure, an issue with the narrative choice to tell the story in real time. Flashbacks were meant to give us background on the characters and to explain their motivations, but they didn’t do a very good job.

There wasn’t a lot of depth to the story; it was more a timeline of events, a rather graphic description of a school shooting. There was no emotion, no intimacy between the characters, and so it was hard to connect with them and feel for the ones who died. The shooter was basically a cartoon villain with the way he almost gleefully shot people. Every so often there was another memory of him that chipped away at what little humanity he was given. There was almost nothing to explain his motivation, but we are clearly meant to find him evil, from the repeated instances of his homophobia to the knowledge that he raped a girl (a plot point that was introduced and then almost immediately dismissed, used as just another way to highlight his “evilness”).

That was my main issue with This Is Where It Ends – so many controversial topics are glazed over and never truly explored. This was pure drama. It felt as though Nijkamp wanted to be political but at the same time didn’t want to offend anybody.

This Is Where It Ends by Marieke Nijkamp is published by Sourcebooks Fire and is available January 5, 2016 wherever books are sold.

Previous:Your Crash Course to the World of Shannara
Next: “The X-Files Re-Opened”: One Fangirl’s Perspective