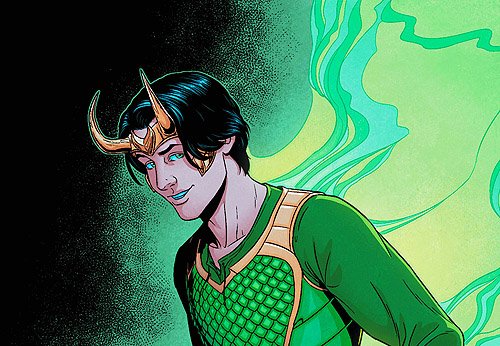 Yesterday, the news broke that Marvel supervillain and occasional anti-hero Loki has officially been outed as both bisexual and genderfluid. This riveting piece of information comes directly from Loki’s new writer and handler, Al Ewing, who wrote in response to a fan question that “Yes, Loki is bi and I’ll be touching on that. He’ll shift between genders occasionally as well.”

This article contains spoilers for Loki’s current and upcoming storylines, including Journey into Mystery, Young Avengers, and Loki: Agent of Asgard. Proceed at your own risk.

The question of whether Loki is bisexual came in regards to Loki’s upcoming solo series, Loki: Agent of Asgard. Previously, he has been handled by Kieron Gillan, who resurrected Loki after the Siege as a shady but benevolent child. After several mischievous, world-saving antics, Kid Loki was booted out of his own body by the phantom of his older self and erased from existence.

Since then Loki, in the guise of his kid self, has been tagging along with the Young Avengers, whose current run is also helmed by Gillan. Loki’s plans will shift once again in Agent of Asgard, where he’ll be sporting a new grown-up body and doing mysterious spy/espionage work for the All-Mother.

The news of Loki’s bisexuality and genderfluidity is certainly surprising, but not necessarily because of its ramifications for the character. Loki in Norse mythology is infamous for his numerous kids by all sorts of beings that he has both fathered and birthed.

While Marvel isn’t of the habit of following their source material to the letter, this particular development makes sense for Marvel’s Loki. He’s spent time as a woman before (though he achieved that particular status via sinister, body-snatching means). More recently he has shown some pretty overt-if not too serious- interest in several of his fellow Young Avengers.

What’s surprising about a Marvel writer openly saying that Loki is bisexual is that Marvel has actually allowed for a previously straight-coded character to come out as bi. While Marvel boasts several excellent queer characters (two of which, Wiccan and Hulkling, are part of the Young Avengers with Loki), they have rarely reinvented a character as queer, at least in the main continuity.

However, reinvention seems to be a big thing for Loki right now. Gillan’s Journey into Mystery run was a brilliant metafiction on the seemingly inescapable destiny of being a comic book villain, and Kid Loki managed to prove that he could change his fate for the better before his death at the hands of his older self.

Now, with the spirit of Kid Loki as his conscience, Loki is struggling with his guilt and seems to be attempting to change himself. His work in Agent of Asgard certainly sounds like a recipe for mischief, but if anyone can get out from underneath their perpetual villain status, it’s Loki.

With his incredible popularity, thanks in part to Tom Hiddleston’s iconic portrayal, Marvel would be insane not to ride the Loki train for as long as possible, especially when the comics have been taking him through some fascinating storylines that result in rich character development.

We just hope that Loki’s bisexuality and genderfluidity will be explored thoroughly and respectfully.

You can check out Loki: Agent of Asgard when the first issue drops in early 2014.