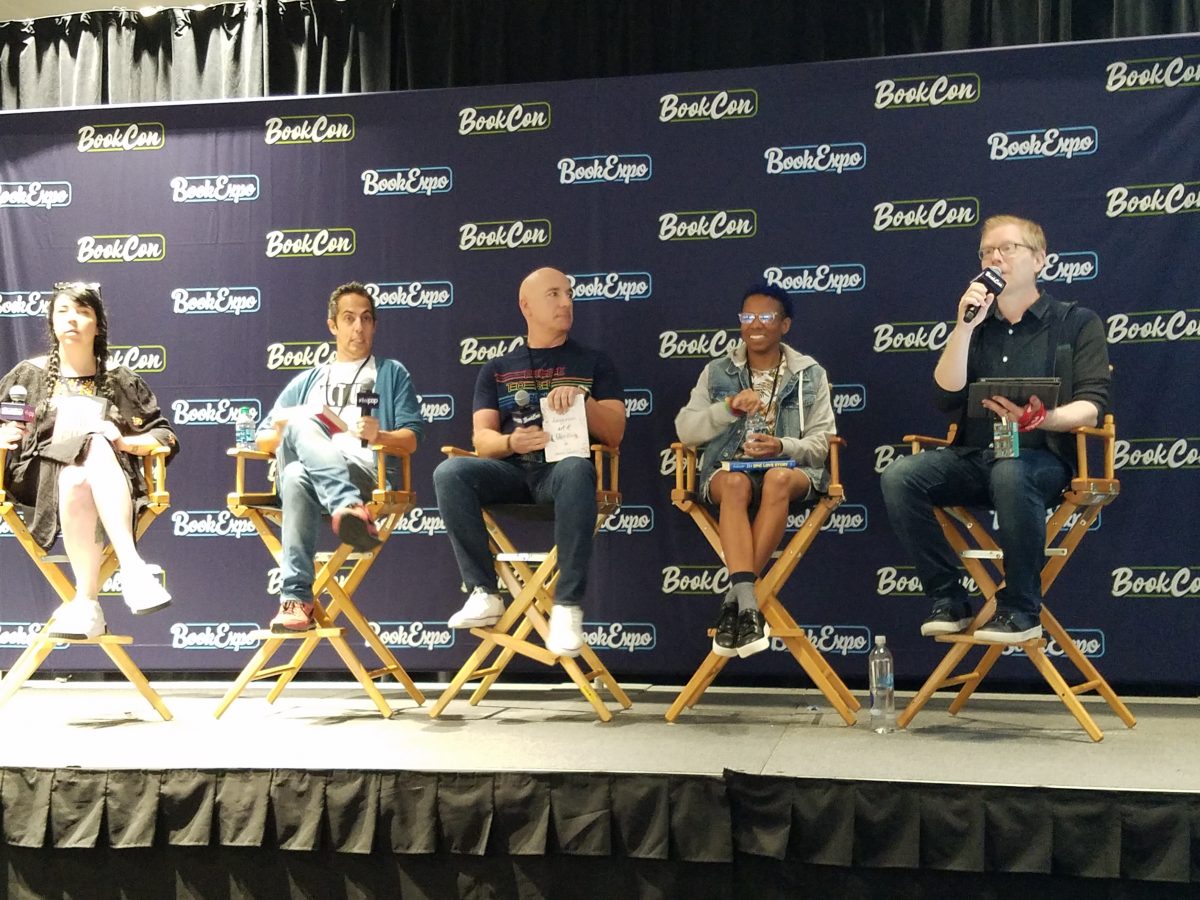 BookCon has made an effort to diversify its panel offerings since they were so heavily criticized after their inaugural convention for not being more inclusive. One of the many panels this year that offered a diverse lineup was the “Love Is Love” panel, which featured LGBTQ+ authors discussing the need for more queer love stories.

Moderated by Anthony Rapp, the “Love Is Love” panel featured LGBTQ+ authors from a wide range of backgrounds talking about their books and their experiences. Tehlor Kay Mejia (We Set the Dark on Fire), Abdi Nazemian (Like a Love Story), Angelo Surmelis (The Dangerous Art of Blending In), and Kacen Callender (This Is Kind of an Epic Love Story) – whose former name I incorrectly used in my live tweets of the panel, for which I sincerely apologize – spoke both about their experiences growing up and what writing these queer love stories meant to them.

All four panelists had similar stories about growing up, which is that queer love stories were something they either did not seek out or didn’t know to look for in the first place. All of them talked about coming from very conservative, homophobic backgrounds and having to fight against that in finding their own selves. Kacen said that their first encounter with a queer romance was fanfiction (I believe they said Gundam fanfic, for anyone curious), and that before they read that, they hadn’t really known that that was a thing people could be.

Abdi grew up inserting himself into queer narratives in stories that weren’t actually queer. He talked about film classes where they would look at a film that wasn’t queer at all but still find all this subtext. “This isn’t queer,” he said, “but we’re going to make it that, because we don’t have our own.” Angelo, meanwhile, whenever he found a queer story, would “pawn it off” on all of his friends, even the ones who weren’t gay, and try and get them to read it.

As for pushback, each author has had different issues. Tehlor explained how she is often told that she can essentially pick one community for her books – that they can either be Latinx or queer, but not both, because then “only Mexican lesbians” would read it and that’s “too niche” of an audience. Kacen’s push back was also about inclusivity, only from the standpoint of readers who flat out stated that they weren’t interested in the book because was about two men. Kacen said that reminded them of when they were told someone wasn’t interested in a book because the characters were black. Kacen says that it’s important to read stories from outside our own experiences and that we should show them just as much love.

Abdi talked a lot about self-sanitizing his stories because he was both still dealing with internalized homophobia and used to dealing with film, which often has to be more commercial. Angelo was often asked, “Do we really need another coming out story?” Because, indeed, a lot of queer love stories – especially in YA, which all of these books are – focus a lot on coming out. But then Angelo talked about all of the high school talks he did, and how students would come up to him and thank him for writing such an honest coming out story. So he wishes he could go back to all of the editors who asked him that and tell them that yes, we do need another coming out story.

Writing, for the authors, can help them explore themselves and can often be very cathartic. Tehlor, a “white-passing Latinx,” talked about wanting to explore what to do when you belong to and identify with a community but you also have more privilege than most of that community. Abdi said he hadn’t even realized how many emotions he was still holding onto from growing up queer and Iranian in the ’80s until he started writing his book. A friend of his read it and told him that she’d had no idea he had gone through all of that as a teenager.

When asked by an audience member if they were ever told they needed to change their name or “act straight” to get their books published, both Abdi and Angelo admitted that they were told this – but in Hollywood, not in publishing. Angelo admitted that he was brought on a design show and that he needed to a) change his name and b) not talk about his boyfriend. So naturally, he didn’t change his name and talked about his boyfriend all the time. And they fired him – but not to worry, he soon found a show on another network.

When asked about what allies can do to help, Tehlor talked about “knowing when not to talk” and the importance of recognizing and magnifying the voices of people with less privilege than yourself. Abdi shared a touching anecdote about a woman who contacted him via Instagram because her son had just come out and they were from a very religious community so they didn’t know any gay people, and she was reaching out to LGBTQ+ people online for guidance.

I enjoyed many of the panels I attended at BookCon, but honestly, this one got to me the most, I think. I have a stack of books to read from this year’s Book Expo (and some from last year that I never got around to!), but I’ve decided that in honor of Pride Month, I’m dedicating June to queer love stories. In fact, I think I’ll start with This Is Kind of an Epic Love Story.

Previous:BookCon 2019: Looking for Alaska Finally Has a Premiere Date