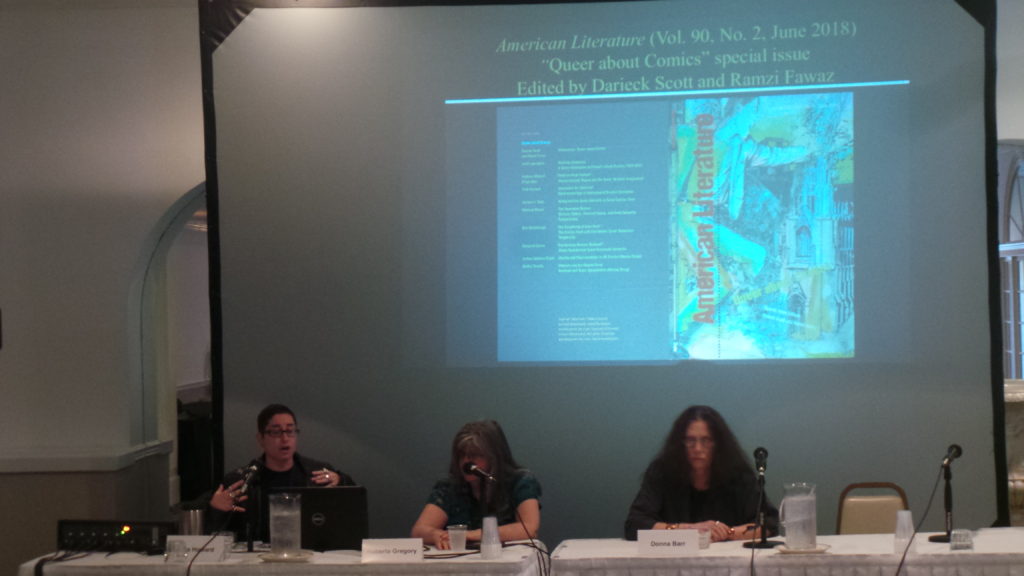 Last weekend’s San Diego Comic Fest had a lot to offer fans who like to dig into the deeper context of comics. The ‘Gender, Sex, and Sexuality’ panel moderated by SDSU professor Yetta Howard provided an interesting look at some creators who used the comic medium to explore themes of gender and sexuality.

The panel had a much longer name on the official San Diego Comic Fest program: ‘Gender, Sex, and Sexuality: the Queer Comix Collaborations of Kathy Acker and David Wojnarowicz and the Work of Roberta Gregory and Donna Barr’. It’s a long name for a wealth of material. Audience members enjoyed a rather scholarly discussion of topics such as sexuality, feminism, sex, LGBTQIA+, and the various works of both Roberta Gregory and Donna Barr.

You probably don’t want to watch this at work due to the language and content, but it is an enjoyable overview of the topic. The panelists covered the works of Gregory and Barr, as well as the late Kathy Acker, in some detail. (Fun fact: Acker is the poet and novelist who served as the the basis for Delirium from Neil Gaiman’s wildly popular Sandman series.) The comics of the late David Wojnarowicz, painter, writer, and photographer, were also up for discussion.

Yetta Howard kicked off the panel by talking about some of her own work, including her forthcoming contribution to an issue of American Literature aptly titled ‘Queer about Comics’. She drew details from that piece as well as 7 Miles A Second from Wojnarowicz, James Romberger, and Marguerite Van Cook. The conversation shifted to Kathy Acker’s 1996 postmodern, feminist reworking of Treasure Island titled Pussy, King of the Pirates with some mention of her illustrated novel Pussycat Fever.

Panelist Roberta Gregory has been a prominent comic book industry figure since the mid 70’s. Her father was a Disney artist and writer, and as a child she made her own comics to sell to family members. (The CBLDF did an amazing interview with her if you want to check it out.)  Gregory rose from self-publishing her first comic book (the loosely autobiographic Dynamite Damsels) to having a series of shorts based on her characters created for Oxygen and Canada’s The Comedy Network.  and later found support from. Gregory touched on much of her body of work including Frieda The Feminist, Bitchy Butch, Artistic Licentiousness, and more.

The last speaker on the panel, Donna Barr, is another familiar face in the comic world. You may want to turn down the volume on her part since the speakers in the room were a little unbalanced. It’s worth it. Barr shared memories of her Catholic upbringing (she calls herself a “recovering Catholic”) and her time in the US Army, as well as her works like The Desert Peach. Her thoughts on rape culture were especially interesting.

I managed to film the panel, so you can watch the entire thing in the two videos below.

‘Gender, Sex, and Sexuality’ was one of the more interesting panels I attended during San Diego Comic Fest (April 20-23 at the Town and Country Hotel in San Diego, CA).