The Walking Dead 7×03 Review: The Cell 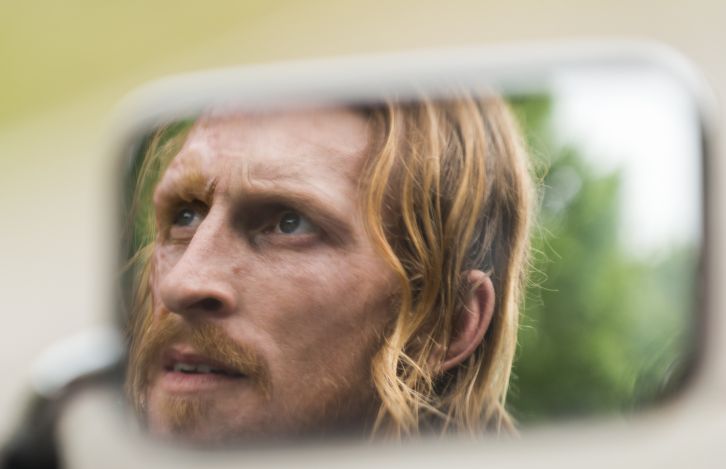 While it was an awkward transition from the season premiere to last week’s episode “The Well“, this week’s “The Cell” was such a poorly-paced episode that it made the previous two seem absolutely amazing in comparison.

To start with some ‘positive’ aspects of “The Cell”, it was nice to finally get a glimpse into how The Sanctuary works and how The Survivors live. For instance, they still have enough generator access to watch old television shows and play music (even just to torture people, apparently), and while they obviously get a good amount of supplies from other communities, they also have their own gardens, chicken coops, etc.

While the walkers chained up outside The Sanctuary’s fences were a mystery at first, it was soon revealed that they were people who hadn’t met their end via Lucille…but whom Negan had deemed useless nonetheless. However, his (andother Saviors’) constant threats about turning Daryl into one of those walkers were empty ones. 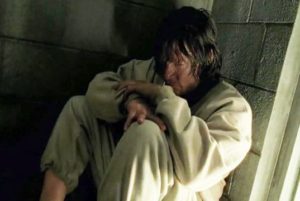 I feel as if I have to take a moment to admit that while I like Daryl just fine, I’ve never been a huge Daryl fan – not in the way I know some people are. I’m not saying anything bad about the character, the actor, or those who are fans of either; I’ve had moments where I absolutely adore Daryl, they’ve just always been in passing. (Plus I’ve met Norman Reedus and he is absolutely one of the sweetest celebrities I’ve encountered to this day.)

But at the same time, I’ll admit that I wish that Negan had killed Daryl rather than Glenn in “The Day Will Come When You Won’t Be”.

All that said, I still couldn’t stand seeing Daryl tortured in “The Cell”. It was bad enough knowing that he was eating dog food (even if he didn’t realize it, though he probably did), but the fact that they left him naked for half the episode AND played loud, obnoxious, happy-go-lucky music to keep him from sleeping was almost too much. (I say “almost” because eventually the torture was too much, but a lot happened before I felt that things had reached the point of no return.)

The problem is, most of what happened in “The Cell” was, well, boring. I care about Negan’s relationship with the other communities, but I don’t care about The Sanctuary – the show hasn’t made me care about it. Perhaps they were trying to do so with this one episode, but if so, it was a weak attempt. I felt tortured myself; not as much as Daryl was, obviously, but I must have glanced at the clock half a dozen times and thought, “How is it only 9:19/9:28/9:36/9:49/9:51?” (I could go on and on.)

The thing is, for someone who supposedly keeps his promises, Negan isn’t doing a very good job of that when it comes to Daryl. He threatened to chop parts off of him in the season premiere; in “The Cell” he threatened his well-being and/or life several times. Yet while Daryl is certainly being treated like crap, he’s still alive and generally faring well. He’s not severely injured. He’s not exposed to the elements. He’s being fed, and eventually he even got some sort of clothing.

I mean, let’s be honest – in general, that’s kind of a decent living considering the current state of affairs.

Meanwhile, Dwight is the worst. I doubt anyone liked him very much before now, after he stole Daryl’s bike and crossbow and killed Denise last season, but there were moments in “The Cell” where I thought I could actually come to some sort of understanding with who he is and why…until the end. Because here’s the thing about Dwight – yeah, he’s been through some shit. Yup, he went ahead and ‘killed’ that guy who ran away. But in the end, he still gave in. He’s still under Negan’s thumb. He killed the runaway, but not really – the guy is now a walker, part of The Sanctuary’s little chain gang outside of the fences. And then on top of that, he taunted Daryl that extra bit – blaming him for Glenn’s death and even leaving the Polaroid of Glenn’s bashed-in head in Daryl’s cell.

Of course, not only does that make me curl my lip at Dwight, it makes me angry with the writers. Daryl has suffered enough – look at everything that he went through with his brother! He didn’t need to be ascribed anything else, and yet every death that has been part of his character development really should have been more important for another character (or characters) – Beth was Maggie’s sister and Glenn’s sister-in-law. Denise was Tara’s girlfriend and Carl’s lifesaver. Glenn was Maggie’s husband and the father of her family. We can really go all the way back to Sophia and how much the show made her disappearance and death effect Daryl as much as it did Carol! But hey, let’s make it all about Daryl, right? And no, this isn’t some rant about Daryl not existing in the comics, because I actually think that he’s added a lot to the show. What I do hate is that so many deaths are used for Daryl plot fodder when the people involved have longer-standing attachments with other characters.

Not to mention the fact that a lot of people in The Walking Dead seem to be pretty obsessed with Daryl right now. Negan refuses to follow through with his threats to kill him. Sherry is trying to ‘help’ him. And above all, Dwight is trying to be him. He already had Daryl’s motorcycle (now ruined, ugh) and crossbow, and since Negan took Daryl captive, he has Daryl’s vest as well. Then, when Daryl wouldn’t break like Dwight did, Dwight reminded Daryl that it was his fault that Glenn was dead…and left that Polaroid in Daryl’s cell. The problem is – for Negan, Dwight, and in a way, Sherry – Daryl isn’t ready to kneel, and I don’t think he ever will be. (Or maybe I just hope he never will be.)

All I know is that Daryl’s final words in “The Cell” were very thought-provoking. “I get why you did it. Why you took it. You were thinking about someone else. That’s why I can’t,” he told Dwight.

Unfortunately, none of what did happen in “The Cell” makes up for the fact that it was downright boring. I’m not sure how next week’s episode will be ninety minutes long and still keep things interesting, but I guess I’m going to keep my fingers crossed, because at this point I’m not sure things can get much worse than this. (And now watch me cross my fingers that Rick and Michonne stay alive because I watch this show for #Richonne these days)