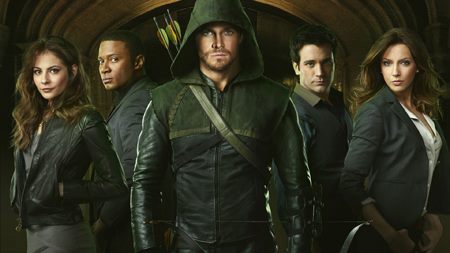 Arrow debuted in the October 2012 to good ratings, and has been going strong ever since, with a thriving fanbase that pulls in both comic book fans and fans discovering this world via the TV series. In case you missed all the buzz, here are 10 reasons why Arrow is must-watch TV, whether you’re a genre TV an, a comic book fan, or looking for a good action-drama series. 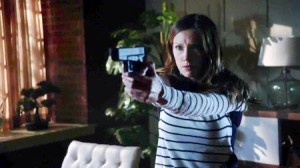 While Arrow’s central figure is Ollie and his hero’s journey, Arrow has more than one female lead on a journey as well. Although there is some romance, the female characters also drive the plot, are part of the heroic teams, and have quests and goals of their own. They also cover a variety of skills and emotional roles. “Strong female character” doesn’t just mean the ability to kick bad guys in the face (although that’s definitely good to see), it means a layered character with both strengths and vulnerabilities. Arrow has an abundance of highly skilled, competent, smart female characters, whether it’s the ability to kick bad guys in the face, hack into unhackable computer systems, or run their own business. Laurel Lance is currently a lawyer, rather than her ass-kicking persona from the comic books, Black Canary, but she still uses her knowledge of self-defense and ability to handle a gun. While she often needs an assist despite her physical abilities, but she’s also protected the male characters. Felicity Smoak doesn’t do much physical fighting, but is smart and dangerously competent, virtually kicking bad guys in the face with her technical skills. Moira Queen, mother to Oliver and Thea Queen, wields power in another way, ruthless in some ways, sympathetic and vulnerable in others. There are heroes and villains, friends and sisters, mothers and love interests, daughters and cops, leaders and those just beginning to realize what they can accomplish. Some die, as do some of the men, but far more survive and grow and struggle on.

The show also has more than one character of color who plays a major role and is one of the good guys, including John Diggle who is a lead hero. Arrow has a tendency to use characters of color as villains, but doesn’t lack for diversity of characters. It also revealed one of its heroes as bisexual.

Oliver Queen, John Diggle, and Felicity Smoak are strangers at the start of the series. Watching the three grow into a team is one of 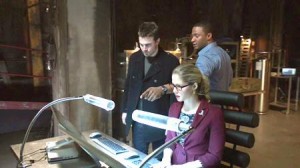 the best parts of the show. John Diggle starts as the hired bodyguard who Ollie keeps ditching and believes he doesn’t need. In fact, Ollie doesn’t need a bodyguard, he needs a partner to watch his back, and that’s what Diggle becomes. “I’m not signing on to be a sidekick,” Diggle tells Ollie.

Felicity Smoak works in IT at the Queen family’s company and is insecure, consistently fearing getting fired despite her awareness of her own competence. Oliver starts tapping into her smarts to help solve cases. Both John and Felicity find out Oliver’s secret, and get drawn deeper and deeper into his world as they form a team. Felicity struggles with the more frightening aspects of the work they do while we see her confidence grow. In contrast to John Diggle, who is former military, and Oliver, who spent years on in island being honed into a scarred warrior, she has no experience with physically dangerous work. Diggle likewise has his own arc, with his own past ghosts to deal with. The trio not only becomes a progressively more effective crime-fighting unit, they become progressively closer to each other emotionally as well. The show frequently shows Team Arrow patching up each other’s wounds, sparring, and being a steadying influence or support for each other.

Team Arrow also expands to include more heroes. Even though the series is built around a single titular superhero, there are many heroes of all different kinds, and the support network isn’t limited to those with access and knowledge of the Arrow cave.

John Barrowman as Malcolm Merlyn and Manu Bennett as Slade Wilson (a.k.a. Deathstroke) have both been stand-out performances, not only on the show, but among genre TV characters. Merlyn’s ongoing presence and impact on the entire Queen family has been compelling so far, and Barrowman has been announced as a regular for season 3. Manu Bennett’s Slade, who we follow in two timelines, the island flashbacks and in present day Starling City, is an absolute powerhouse in season 2 and provides a great foil for Oliver. Some of Arrow’s villains work better than others, but these two are unusually memorable. It’s not just mentor, family, and friends who help forge Oliver into a hero, but his adversaries as well.

4. Families of all kinds 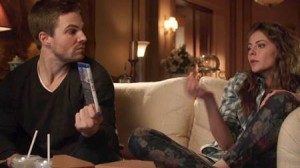 Arrow explores parent-child relationships, siblings, friendship bonds that are like family, as well as romantic ties. It often combines the romantic aspect with the friendship bonds. Felicity and Oliver’s romantic tension co-exists with how well they work as a team and why their friendship is so strong. Laurel Lance and Oliver’s troubled romantic past and on-again off-again romantic drama doesn’t prevent the show from growing a real friendship between the two and showing their caring for each other even when they aren’t an item. Ollie’s bond with his younger sister, Thea, his friendship with both Diggle and Felicity, and with his best friend from childhood, Tommy Merlyn, are given their full due. Thea’s relationship with her mother, Moira, and with Roy Harper, are developed and examined, as well as Laurel’s relationship with her father, mother, and sister. Tommy and his father have a troubled parent-child dynamic. The Lance, Queen, and Merlyn families offer a multigenerational, complex trio of touchpoints for the show. Along with these blood relationships, there is Team Arrow, and the bonds formed on the island in the course of trying to survive.

5. The building of a hero

One of the strengths of Arrow is how Oliver Queen forms as a hero closely linked with those around him, be it family, mentors, friends, or villains. Arrow uses the island Oliver was stranded on as a metaphor for having faced your inner demons and come out the other side, but also follows the proverb “no one is an island” in the development of its lead superhero, the importance and 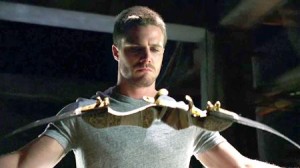 influence others have on us, and the reasons to reach out. Oliver is a boy when he gets on the ill-fated yacht, The Queen’s Gambit. Once he returns to Starling City, a scarred, skilled warrior, he has still barely even begun his journey. He evolves over course of the two seasons we’ve had so far, personally and in his idea of the kind of hero he wants to be.

Rather than starting with an established figure who is the moral compass for everyone else around him to look up to, Oliver learns from those around him and needs his compass points to look to (points which often point him in conflicting directions). He makes mistakes and gets called out on it. He both inspires others and is inspired by them. Many characters help construct the Arrow, while Arrow helps construct other heroes. The modern era of comic book superhero storytelling has involved a lot of deconstruction, which can be compelling, but it also can become  mired in a default of despair and isolation. What’s refreshing about Arrow is that as it shows us in detail the gradual construction of a legend, examining his vulnerabilities and fears and flaws, it’s a hopeful story. There is progression, not grittiness and darkness for the sake of darkness.  In deconstructing an icon DC Comics character, Arrow gives us a whole person.

Without the characters and compelling stories, all the great fight scenes in the world wouldn’t be enough to make a show work, but the way the action sequences are used on Arrow is a force unto itself and adds to fleshing out the world of the characters and who they are. Stunt coordinator James Bamford and his team are extraordinary, and many of the fight scenes are actually breathtaking. Also kudos to Stephen Amell and the rigorous training he does to play Oliver Queen. There’s a whole blog devoted to the work of James Bamford and his team, BamBam Fans.

Along with stunts, the show’s writing team knows how to juggle a large cast of characters and multiple storylines and relationships. The pacing of the storylines and of the action is also a huge asset. There are very few scenes that feel unnecessary or that don’t keep the story momentum going and there’s very little of what feels like “filler” because the producers have to come up with 23 episodes a season. More happens in fifteen minutes of Arrow than some other shows have in an entire episode, and there are many episodes that pull out all the stops with enough power to be a epic finale–and it’s not even the season finale yet.

Oliver Queen is not the only character going on a journey and whose psyche gets explored. Considering the size of the cast, it’s impressive that as many character get so much development–moments that give us insight into who they are, what makes them tick, what they want, what they’re afraid of, what they care about. Some arcs have been weaker than others, but for the most part the characters are satisfyingly developed. There are journeys for those who are masked heroes and villains, and for those who don’t wear a mask, but are fighting their own valiant struggles and part of the hero landscape. 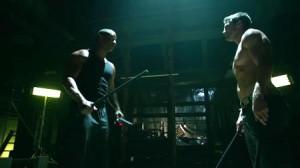 The show is fond of showing Oliver Queen shirtless and upside-down. There’s even been Oliver Queen shirtless, upside-down, chained up, and soaking wet. Diggle and Ollie frequently spar in the Arrow cave, which is great for both the eye-candy and for team-building. Felicity gets sparring lessons too. There’s also a lot of bandaging of wounds. At the start of the series Ollie patches himself up. As time goes on, there are others there to tend to him when he’s hurt, and he tends to others. Medical supplies are definitely one of the most important tools any superhero cave needs. What’s so great about all this (aside from the above-mentioned eye-candy and the depiction of some canon comfort to go with all the hurt) is the depiction of above-mentioned team-building. Arrow actually takes the time not only to show our heroes working effectively together, but allows us to see the in-between time, what happens before and after the missions, how they react emotionally to a frightening job, and how they support each other.

The staging of fight scenes, the color saturation and lightning, the way many shots are framed, will be familiar to fans of superhero comics. Many visuals on Arrow evoke the feel and design of comic book panels. Whether you’ve read comics or not, it’s a very pretty show.

*caps from www.screencapped.net or are promotional images