Evan Peters (and his acting) is the one saving grace that the seventh season of American Horror Story has. “11/9” is a wonderful look into the psyche of the local cult leader and its inner workings.

This entire episode is a flashback, showing how Kai is involved in all of the characters’ lives. We see how he has recruited Harrison, Meadow, and Beverly Hope (the reporter). This makes the episode actually interesting as the main focus of the episode is Kai, the only realistic character in the whole series so far.

Kai’s character is obviously based on previous cult leaders (and serial killers). Kai is never seen committing a murder (at least not a confirmed one yet) and getting others to do his work for him just like Manson. He is shown to be someone who will use whatever sides to recruit people into his ideology like Jim Jones. He is extremely charismatic and boasts about his intelligence like Ted Bundy. All of these were very real people who have been studied inside and out by various sectors of psychology and other social sciences.

Knowing about these people and the set of traits they usually have allows Ryan Murphy to have a base for Kai’s character that is factual and realistic. Compared to the others who are not based on specific actual people, but rather caricatures and memes, Kai stands out as a particularly good focus for an episode. Add on Evan Peters’ amazing acting, and there is a basis for the first actually good episode this season.

The episode opens with all the main characters voting on election night. Kai is shown voting for Trump, Meadow writes in Oprah, Winter votes for Hillary Clinton as does Ivy. However, Ally is shown voting for Jill Stein specifically after Ivy asks her to not cast any “protest votes”. The rift between Ivy and Ally existed way before Ally began to have her post-election breakdowns.

Gary is reintroduced (played by Chaz Bono) and Kai brings him in to vote, and it is revealed that Gary is bleeding. The viewers learn that he lost his hand on election night, as he sticks his still bleeding stump into the air after voting to welcome everyone to Trump’s America. Thus, we are taken into the day and events after the election (thus the episode name, “11/9”). 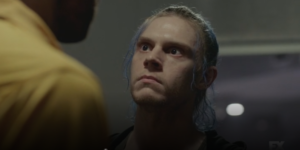 Next we are taken to Harrison’s old job, before he and Meadow moved into the Chang’s old house, at a gym. Kai asks specifically for Harrison and gives him a pep talk saying he wanted him as his trainer because he looked strong. In a very blunt moment of foreshadowing, Kai uses the phrase “you look like you could move a body”. Once again, subtlety is not Ryan Murphy’s strong suit this season.

That night Meadow lets Harrison know that the house is being foreclosed. Meadow refused to tell Harrison because she was embarrassed and did not want to stress him. Kai learns of these events from Harrison the next day and uses this emotional turmoil to let Harrison know he is there for him, supporting him, and suggesting that he kill his boss for humiliating him. Just casual things that friends do.

This is the first look we get into how Kai manipulates people besides his sister, Winter. Kai finds someone who is in need of validation, someone who is humiliated and feeling attacked and cornered by either a person or by life. He then uses this to weasel his way into their life, only to push them (or commit) criminal activity. For Harrison, he helps wipe the tapes and dispose of Vinny the boss’s body and in return, Harrison is now loyal to him. Even if someone in his slowly forming cult were to turn against him, Kai now has power over them through blackmail.

Through this interaction, the viewers also confirm that Kai stalks his prospective victims. “I’ve been watching you for a very long time,” Kai tells Harrison as he is wiping the security footage from the gym. This means that he has also been watching Ivy and Ally for who knows how long, and confirms that the latte incident was 100% intentional.

Meadow ends up looped in with Kai as she walks in on Harrison removing his boss’s head in their bathtub. However, Meadow comes to fall into line with Kai which is shown in a later scene after they recruit Beverly since he is commending her ability to draw masks. This means that the three clowns who are shown throughout this episode are more than likely Kai, Meadow, and Harrison but this is not completely confirmed.

After Harrison, we learn that the newscaster Beverly Hope is also part of Kai’s cult. After seeing her on TV, Kai researches her absence which turns out to be caused by constant sexual harassment while on air. Beverly finally breaks and assaults a teenager for slinging the well-known Trump phrase “grab her by the pussy” at her while she is on the air.

Unfortunately, Kai is seen taking medication repeatedly during his research into Beverly. This is meant to further emphasize how ‘unhinged’ and ‘unstable’ Kai really is. There are numerous shots where Kai isn’t taking medication but it is still in the front of the frame. This is upsetting, because along with Ally’s character, further stigmatizes people with mental illnesses as violent. They are the only two characters shown to be taking medications or hinted to be taking medications, and they are arguably the most violent people so far this season. Ally has killed someone (albeit accidentally) while also threatening to kill numerous people. Kai has commanded people to kill (and possibly even killed himself).

The medications could have been left out of this section on Kai, since it is not necessary to drive home the point that there is something wrong with Kai. They only further are used to explain his actions as delusional and deranged which is something only someone who is mentally ill can be, right?

Back to Kai and Beverly. After Beverly’s return to the station, Beverly finds that the woman replacing her, Selena (played by Emma Roberts), is sleeping her way to the top. In another fit of rage, Beverly slashes Selena’s tires and this is where Kai approaches her, catching her in the act.

Just a romantic night out with the local cult leader.

Kai uses the events Beverly experienced to bring her into his fold, telling her to embrace her rage and that his efforts for equality are not empty like those on both the right and left. He is truly for equality and that Beverly should have everything she wants despite being a black woman. In order to quell her suspicions about his intentions, Kai has his group of clowns (potentially him, Harrison, and Meadow) kill Selena and the camera man while they are shooting. Beverly is now part of Kai’s cult with Harrison and Meadow.

Finally, the ultimate ‘twist’ of the episode. This is not much of a twist for those who have been paying attention, since it is pretty obvious that every character besides Ally is on the side of Kai Anderson or at least connected to him in some way. Ally is shown as not believing there is any way Trump could get elected and showing her support for Jill Stein as shown by her vote in the beginning of the episode. Ivy is going to an anti-Trump protest. She gets face to face with Gary who physically assaults her by grabbing her pussy (can we please stop sexually assaulting lesbians for a point please, Ryan Murphy?). Winter is the one who steps in and chases Gary off, comforting Ivy. Ivy takes Winter back to her restaurant to talk to her and thank her for stepping in.

This means that Ivy had known Winter before she applied to be their nanny to Oz. Ivy does not lead on this when they are introduced and does not act any differently to Ally about Winter when they are hiring her. This is extremely suspicious because there does not seem to be any reason to leave out knowing the person applying to be the nanny unless there is something to hide. Winter talks Ivy into revenge on Gary (off-screen) and they tie him up and handcuff him in a basement. In their compassion for their act, they still leave him food and water within reach and one hand free. How nice!

Winter is acting alone in this, because Kai notices blood on her face and makes her tell him what she did. To bring the episode full circle, Kai is seen talking to Gary and providing him a saw to saw his own hand off in a show of dedication to vote for Trump. This bringing the episode full circle to the election date, “11/9” is well done and ties the episode up neatly. However, this is also concerning because there are no open ends for the episode which means we go back to the regular and awful writing and plot of the season.

“11/9” is a wonderful breath of fresh air in a rather awful season so far. Its focus is the strongest character and best actor this season, which allows for the episode to be the strongest by far. The bar for the season is extremely low, but that does not affect how well this episode portrays or explains the season’s main villain. Ryan Murphy is clearly writing from a point of knowledge when he writes episodes involving Peter Evan’s character of Kai Anderson.