As Seen on the Big Screen: Divine Secrets of the Ya-Ya Sisterhood 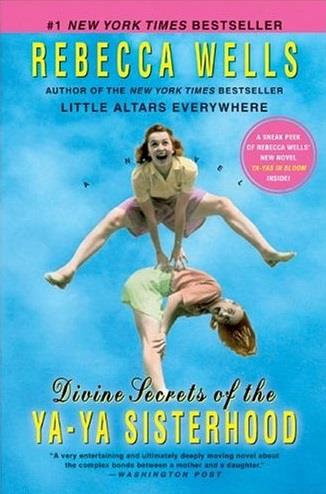 As an avid book reader, I’m sure many people share the feeling I get when I hear news that one of my favorite books being adapted into a film: a potent cocktail of anticipation and dread.  Who will play my favorite character?  Which of my favorite moments will end up on the cutting room floor or worse, not even make it into the screenplay?  As book readers, we simply want the magic that we found within the pages of the story to be translated properly to the big screen.  Baring that in mind, I chose a selection of books I own that have film adaptations.  In these articles, I will discuss what I loved about these books and how their film counterparts measured up.

The Book– Divine Secrets of the Ya-Ya Sisterhood was written by Rebecca Wells in 1996.  The summary of the novel reads as followed: “When Vivi, Teensy, Necie, and Caro were younger, they created the Ya-Ya Sisterhood. The Ya-Yas caused shenanigans and chaos everywhere, but also had a sisterly bond that could fix anything. Now, at 70 years old, the Ya-Yas are determined to fix the struggling relationship between mother and daughter.  Siddalee “Sidda” Walker, a play director, has never had a smooth relationship with her mother, Vivi, but when a New York Times reporter twists Siddalee’s words around in an article about her recent play, Siddalee and Vivi’s mother-daughter relationship goes spiraling down. Not only is Sidda having trouble with her mother, but she is also having trouble with her fiancé, Conner. Sidda postpones the wedding between her and Conner. Between that and Sidda’s now fear to love, she runs off to her friend’s family cabin at Lake Quinault.  When Vivi and the other “Ya-Yas” find out about this, they decide to send Sidda the “Divine Secrets of the Ya-Ya Sisterhood” scrapbook to help Sidda understand their lives, and more importantly, her mother’s life, better.”

I first came across this book when I was fifteen years old.  I was at one of those buy-books-for-dirt-cheap places in Dallas with my cousin and aunt.  I had money in my pocket and was happy as a pig in mud going up and down the countless rows of books, looking for titles that caught my interest.  This particular novel caught my interest because of its cover’s color; I am a sucker for anything blue.  I picked it up and flipped it over, finding no real summary on the back save for glowing reviews.  It was something of an impulse buy, but one I have never regretted as Divine Secrets is now my favorite book.  Even though I was a teenager and Sidda an adult in her forties, I found common ground with her.  We both had complicated relationships with one of our parents and with our places of birth.  When it comes to the South, one can either romanticize it like a country song or vilify it like a history lesson.  However Rebecca Wells depicts the South in all its glory, bad and good, without either side taking president.

The story does have its extremely dark moments.  Child abuse across two generations and alcoholism plays heavily in the development of the story.  But sometimes seeing how someone else deals with abuse might help in how you deal with it yourself.  It certainly was that way with me.  Every time I read this book, I learn a new lesson or am reminded of something I might have forgot.  But it isn’t all darkness and dealing with hard memories.  In dealing what her mother did to her and why it happened like it did, Sidda is reminded of the good parts of her childhood: summers at the creek with the rest of the Ya-Yas and their kids, coming home from school and eating peanut butter and banana sandwiches in the yard…all the tiny magical moments that get lost in a wave of hurt.  If I went into all the ways that this story touched me and resonated with me, I’d probably start a mini-biography about myself.  Suffice to say, this is a beautiful story that will always hold a special place in my heart. 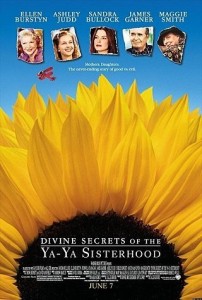 How the Movie Measured Up: The book was adapted into a film in 2002.  Sandra Bullock plays Sidda, and Ellen Burstyn and Ashley Judd play the older and younger Vivian respectively.  The supporting cast includes Angus MacFayden as Sidda’s fiancée Connor, James Garner as Sidda’s father Shep, and Maggie Smith, Fionnula Flanagan, and Shirley Knight as the Ya-Yas Caro, Teensie, and Necie.

Overall it is a good adaptation of the source material.  The biggest change is Sidda’s place of contemplation.  In the film, Sidda is taken by the Ya-Yas back to Louisiana against her will to the old Ya-Ya summer house.  The older women tell Sidda the story of her mother bit by bit, the flashbacks interchanging with Vivi’s own recollections.  The cast did an amazing job, and the production did a great job of capturing that feeling I had while reading the book.  I would highly recommend the movie on the strength of the actors alone, especially anyone who is a fan of Sandra Bullock or Ashley Judd.  These two women truly shine in this movie, both in humor and heartache.

I would recommend both the novel and its film, both beautiful interpretations of a story that will speak to many people.  Stay tuned for more of this series.  In the next article, I’ll be fangirling about The Fault in Our Stars, whose film adaptation I am eagerly awaiting.  If you’ve read Divine Secrets or seen its film, what were your thoughts?  Whatever they are, comment below and thank you for reading!