Harmontown: “Where pee is yellow and poop is brown” 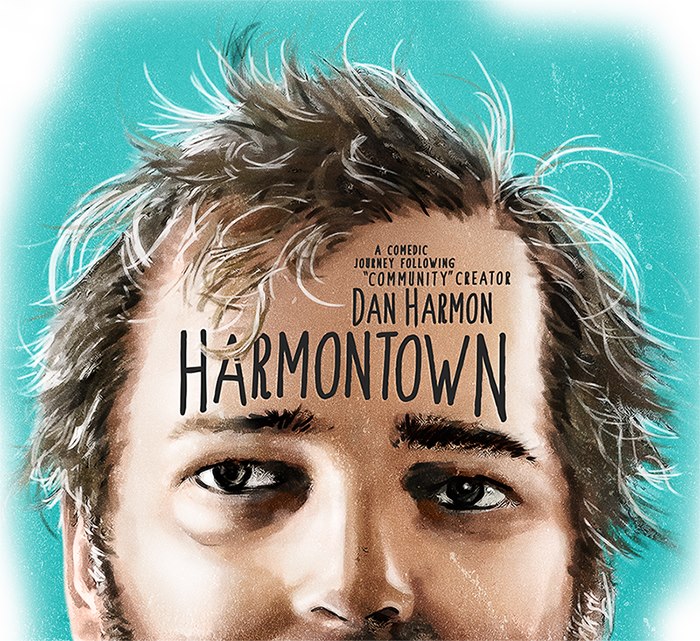 A Harmenian is a nerd full of love, and Dan Harmon is probably the biggest one of them all.

Harmon is probably most well known for Community, the underdog comedy series always on the brink of collapse. This is a perfect parallel to the man himself.

The documentary Harmontown follows Dan Harmon and his crew on their podcast tour, which travels 9,500 miles in 23 days with 20 performances. It is intertwined with interviews from close friends and colleagues that add to the narration and portrait of the beleaguered creator and comedian. The podcasts are never scripted, never rehearsed. It is just him talking. 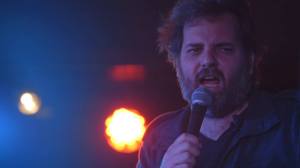 To be blatant, Harmon is stupidly honest tortured genius and a mildly functioning alcoholic. I knew nothing about the man beyond Community, and in watching this fraction of his life, I can see parts of him in each character. He is a man who yearns for acceptance, but he tries too hard for it as those around him are just happy he exists. He gives those akin hope, dealing with their own problems and issues; demonstrating that there is a way forward. Harmon acknowledges this, but a cloud of vodka still exists.

Don’t get me wrong, he is an extremely talented individual, and Community is one of my favourite shows of all time. I was gutted when he was fired, when it was cancelled, and the loss of each cast member (most recently Yvette Nicole Brown who portrays Shirley). Yet Harmon is a self-loathing individual who is cruel to those close to him, knowing and wanting to do better. Even those who love him, including good friend Sarah Silverman and his now fiancé Erin McGathy, know that he has flaws. Harmon even sees himself as the villain in his own life story.

Despite this darkness, Harmontown also illustrates the laughter and need for inclusion for which Harmon strives. “The Oprah for ineffective white people”, he quips at one point. Though there is untold amounts of sarcasm, his ultimate goal is doing good. There is no better embodiment of this than in the inclusion of Spencer Crittenden. 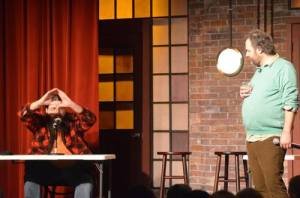 Spencer, an introvert and young man plagued by social anxieties, now acts as the podcast’s dungeon master. He came to the podcast one night in order to play Dungeons & Dragons, and by some fluke, Harmon and his comptroller Jeff B. Davis actually asked the crowd if there was someone who was into D&D. From that moment onward, Spencer found himself part of this motley crew and slowly divesting himself of his shell. Harmon even describes this 23 year old as the hero of the story to his aforementioned role as villain. Spencer is the embodiment of what Harmon wants to achieve, a positive effect on those around him.

Harmon wants to be the guy that makes people happy. He is also a perfectionist. There were a few dark moments, showing the raw essence of the man, but you could still see the aspiration of wanting to do better… to be better. He is a beacon for misfits, for those dubbed Harmenians, for those who fit nowhere else.

This glimpse into the mind of Dan Harmon made me appreciate him more. I have since gone back and watched my favourite episodes of Community and seen the meta that exists. I can see him in each character and line (minus the “gas leak year”). I’ve also become an avid listener of his podcast “Harmontown”. By the end of the documentary, this self-proclaimed “giant rich hairy toddler” knows he must grow up, that he needs to change and his mild sociopathic tendencies have to disappear. Fundamentally, Harmon is as flawed as anyone else, yet as a newly minted Harmenian, I truly believe that there is still hope for us all.