Kuroshitsuji: Book of Circus 3×3; 3×4 Review: His Butler, Hired and His Butler, Taking Flight 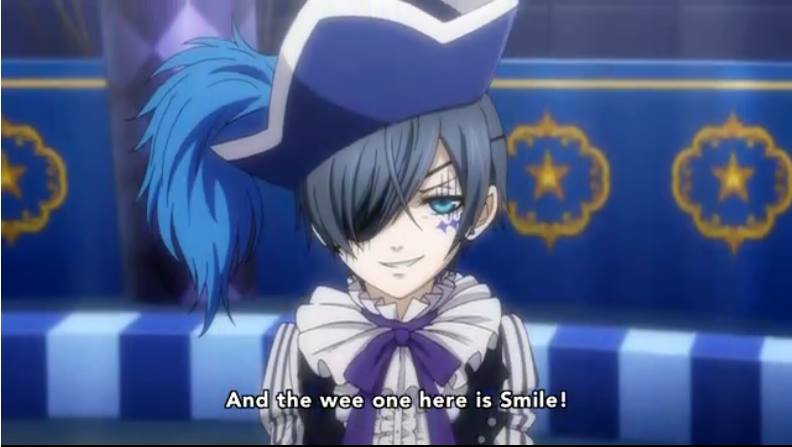 Episodes 3 and 4 of Kuroshitsuji are mainly both establishing Ciel and Sebastian’s place within the circus. Episode three focuses on Ciel’s test. He passes with Sebastian’s underhanded and often painful help, and are given the stage names Black and Smile, much to Sebastian’s amusement and Ciel’s irritation. The addition of two flashback scenes explain a couple of characters which were introduced in previous seasons. The first flashback reintroduces Prince Soma, an Indian prince, and his butler Agni, who are presently residing in Ciel’s London home. Prince Soma regards Ciel as a great friend and excitedly adores him, while Ciel is just able to tolerate his presence. I’m not sure how much of a role Prince Soma will play this season, since it seems Ciel and Sebastian will be spending most of their investigation living among the circus. The writers may be just trying to stay accurate to the manga, but it really felt like filler in a relatively uneventful episode.

The second flashback reintroduces the concept of shinigami, or grim reapers, as we tend to know them. William, a rather up tight and strict reaper, has already joined the circus and is showcasing skills similar to those Sebastian was able to preform. Reapers generally stay out of the affairs of humans, so one being present at the circus is a serious red flag for our duo that something is indeed afoot. They also really don’t like demons, as they get in the way of their soul collecting and add a lot of additional paperwork to sort out. There is only one other thing of particular note during episode three, that all the first string performers, bar Snake, are childhood friends. The way it was emphasized leads you to believe it will be important later on.

Episode four has much more going on. William and Sebastian have a private conversation about what the other is up to. William is weary of Sebastian, calling him “a half starved demon”, but as he’s currently leashed to Ciel, he is somewhat safe. We learn that he intends to collect a large number of souls from the area in the near future, but that is all he’s willing to say. There’s some cute comedic moments here but the interesting part was learning a bit more about demons, and how their hunger works. Sebastian is half starved yet he prefers to cultivate a soul while other demons don’t bother forming contracts. It begs the question, why Ciel? How does contracting a soul differ from what I guess would be stealing one? And does a person need to die before a demon can do so? These are questions that I’m not even sure will be answered by the end of the manga, and is just adding to love/hate battle I have trying to sort out Ciel and Sebastian’s relationship in my head.

Later that night, they are assigned tent roommates, Sebastian is assigned William, much to both their horror, and Ciel is paired with an unnamed teenaged boy. Ciel makes a fuss about not being able to room with Sebastian and this leads the others to tease him about not being attached to his apron strings. This joke follows into the next day when Ciel continues to fail at some very basic tasks and Sebastian tries to help him. Not enjoying the attention, Ciel orders Sebastian to no longer treat him as his master while they are there.

During the night, we finally get a bit of truth about the circus. Joker receives a cryptic letter and gathers the first stringer, those that were mentioned being childhood friends; no one is happy. We see them sneak out of the circus in the dead of night and go into town. There they lure a young girl into their carriage, using some sort of hallucination on her. We see part of it from her perspective and it looks like a dream. When we cut to reality, the scene is far more gruesome, with the members cutting down a couple of police officers with an assassins ease. They take off once the girl is in the carriage. I don’t know what it was they did to the girl, because she was completely oblivious to what was actually going on around her. All the members took part, but it’s noted that Doll hesitated at one point and had to be saved. Sebastian had noticed them leave but William stopped him from following, not wanting the demon to wander loose without his master. 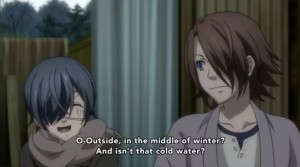 Ciel’s still unnamed roommate really takes him under his wing and is shown being extremely friendly and helpful. After a day of practice, where he laments Ciel’s sudden loss of skill, he drags him to the “showers”, which Ciel is horrified to learn, consist of many large buckets of water sitting outside in the very cold air. This situation gets worse when the boy tries to get Ciel to undress. Ciel is very adamant about not doing so and the boy, not understanding the issue, continues to pull at his clothes. They fall, causing one of the buckets to fall on them and the boy is able to lift Ciel’s shirt just far enough to reveal a branded mark against his skin, he’s shocked and Ciel is able to run away.

This mark is from the time Ciel was imprisoned, directly before contracting Sebastian. It’s something he never allows anyone but Sebastian to see and goes into a panic whenever people try to see his back. I hesitate to say he has PTSD, as I don’t like to pull an armchair psychologist and diagnose anime characters, but this is a case where I feel the author specifically looked at the symptoms of PTSD gave many to Ciel, though I’m basing this on more than just this scene. He seriously freaked out and is found cowering and shaking behind a wagon by Sebastian later on. Ciel complains that he doesn’t want to do this anymore, shouting and nearly throwing a tantrum over it. Sebastian calmly pokes at his pride, we see a quick glimpse of Ciel’s former imprisonment, a peek of what he’s already endured, and Ciel manages to pull himself together, determined to continue on. His pride is a definite weakness I feel, one which Sebastian knows how to play well. 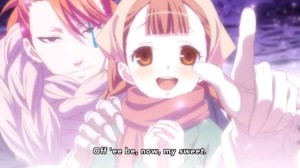 I don’t have much else to say on these episodes. They set up daily life in the circus well, introduced a few new characters, gave us some back story, and of course, revealed exactly who the culprits are. Though who sent the foreboding letter, and likely the one pulling the strings, is still a mystery. The only stand out scene was the abduction. The transitions between this wonderful dreamland with these characters we’ve come to like, to seeing them playfully killing innocent men and knowing they’re kidnapping a young child for an unknown means, is especially visceral. You really want to like these guys, Joker especially, and with Ciel acting like a prideful prat, you’re left wondering who you’re supposed to root for. Overall a somewhat decent couple of episodes, though I felt episode three was mostly filler, and four was just average. The series pacing isn’t bad, however, so my expectations are still high for the remainder of the show.

Kuroshitsuji is available for streaming via Funimation