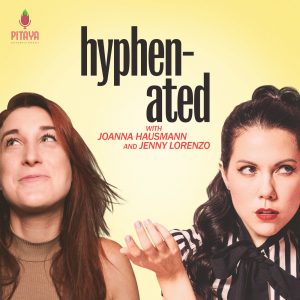 YouTube stars Jenny Lorenzo and Joanna Hausmann team up in their new podcast Hyphenated (from Pitaya Entertainment), discussing Latinx identity in real life and in the media.

Like Jenny and Joanna, I grew up questioning my cultural identity. My mom’s family are Afro-Tainos, my dad’s grandparents emigrated to Puerto Rico from Morocco and southern Spain. Relatives from both sides are visibly Black. I was born white. When I moved to the States at the age of six, I began to forget my Spanish. My father discouraged me from speaking it, not wanting me to end up confused while learning English. I shed off evidence of my Puerto Rican heritage over the next several years, avoiding Latinx media and connections in fear of being told that I wasn’t Puerto Rican enough. I had a nickname that I no longer use now. My white privilege allowed me to slip into the background easily; people mistook me for Irish, Russian, or just American. And I went along with it. Experiences with my relatives showed how I was differently treated because of my white skin (I prefer to call myself afrodescendente than Afro-Latinx for this reason). I didn’t embrace my cultural identity and heritage until grad school.

So when I discovered that Jenny and Joanna had officially launched their podcast, I immediately checked it out. I took the time to listen to the first two episodes and was so moved by Jenny and Joanna’s experiences and insight. Jenny, a white presenting Cuban-American, and Joanna, a white presenting Jewish Venezuelan-American, share what it’s like to live in the hyphen between American and their cultural identity. The two talk about common misconceptions and stereotypes about Latinx, the various dialects and linguistic evolution in Latin America and the Latinx diaspora, and the religious diversity in Latinx communities.

Misconceptions still plague the discourse surrounding Latinx representation in the media. Black Latinx are overlooked, and colorism and anti-blackness are ongoing issues. Saying that Latinx is a race or ethnicity erases Black, Asian, Middle Eastern, Jewish, and Muslim Latinx. There are even Indigenous populations that don’t want to call themselves Latinx and don’t speak Spanish. “Spanglish”, Hyphenated podcast’s first episode, discusses the linguistic and social evolution of the diaspora.

Latinx isn’t a monolithic group, although some people still resort to myths like all Latinx celebrate Día de los Muertos (a Mexican holiday), eat tacos, or know how to dance salsa. Latinx communities in the US have picked up Spanglish, especially in New York City and Miami, although some people (even Latinx) think it’s degrading or stereotypical. Jenny mentions the criticisms she’d received for speaking Spanglish in her comedy sketches. In the episode, she points out that the Latinx population in Miami (the majority of them Cubans and Cuban-Americans), where her sketches take place, mix their Spanish and English. I can confirm this as I’ve been to Miami to visit relatives several times. Latinx populations vary in race, ethnicity, and religion. The media has yet to achieve this.

Joanna tackles religious and cultural misconceptions in Latinx communities in the second episode, “How Religion Shapes Culture and Identity”. When it comes to religion, some people still believe that all Latinx practice Catholicism. Contrary to that popular belief, most Latinx in Latin America and the diaspora practice Protestantism, Islam, Judaism, Paganism, Buddhism, Afro-Indigenous, and other religions. While listening, I found myself nodding along to their experiences with superstitions in their family. I didn’t question why my mom would put her broom upside down behind the front door until recently. My relatives frowned on Espiritismo or seeking help from curanderas, yet they consult witches (brujas) to hex enemies or find a cure for chronic pain.

The fact that this podcast exists makes my heart soar. These discussions dismantle the common images and sentiments about Latinx in the media. The issue here is that the media isn’t giving enough space for Black Latinx, Latinx from different religious groups, Latinx that live in US cities and regions other than New York City and Los Angeles, and Latinx from all experiences and backgrounds.

You can listen to Hyphenated (from Pitaya Entertainment) on any of the available platforms here. For more podcast recommendations, check out the tag. If you want to check out other recommended media, browse through this tag.