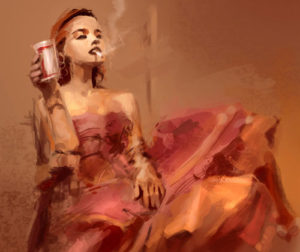 DISCLAIMER: This web page was made as an item for Gishwhes 2016.  All information here is parody.

Just who is Miss Jean Louis?  She often signs her emails as “Advisor (a.k.a. Babysitter) to Misha Collins,” but many suspect her story runs much deeper than that.  By her own accounts she was born in a hut in Khor Angar, in the dirt. “[I was ] midwifed into the world kicking and screaming and that is how I shall leave,” states on her Twitter account.

Khor Angar, a small town situated on the west coast of the Bab el Mandeb Strait, was previously an isolated strip of dirt with no contact with the outside world.  When Jean Louis was born, however, all of that changed.  The town now boasts an airstrip, several bushes, and possibly one Pokestop (maybe).  Dissatisfied with such a dusty lifestyle, Jean Louis packed her bags and flew to Generic Cultured European City (probably Paris) where she studied Art History and Babysitting with a minor in Astrophysics and Overzealous Snobbery.  They say that if you visit Khor Angar on lonely nights you can hear her screams echo across the dust fields.

While working on her Masters in Washington DC she ran across a plucky young White House intern named Dimitri Krushnic.  Upon meeting the man that would eventually be known as ‘The Overlord’ she said two vital things that forever altered history.  “Your eyes are far too pretty for Washington,” she said to young Krushnic.  “They belong in Hollywood.  Or, barring that, Vancouver at the very least.”  Then, after a long pause and long drag of her cigarette she said, “and change your name.”

From that point forward Miss Jean Louis and Misha Collins were an inseparable pair absurdity and beauty.  Without this chance meeting the world would have been deprived of the art and splendor of Gishwhes and Vancouver would have missed out on the most dazzling depiction of an angel the world has ever seen.