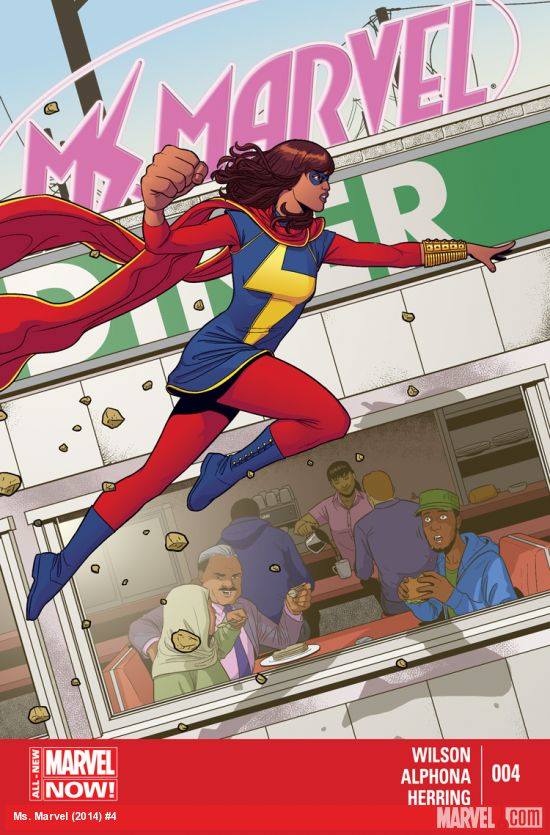 The last time we saw the new Ms. Marvel, she was accidently shot trying to stop an armed robbery. This month’s issue showed her fate, new powers, and introduced the story’s main villain.

I was really worried when last month’s comic book issue showed Kamala Khan getting shot in the stomach. I knew that Mystique from X-Men had regenerative powers, but Kamala? I wasn’t sure. Vick, the boy who shot her, was told by his older brother, Bruno, to run away. Kamala tried to speak to Bruno and tell him not to call an ambulance or the cops. However, he did call them. I liked how Bruno didn’t lose his head during the events and kept his cool. I knew from the start he was going to be the person Kamala would confide in about her powers. A nice surprise in the comic book was how Kamala’s new powers worked. When she turned back into her normal self, her injury was gone. The bullet wasn’t even in her body. But when she tried becoming Ms. Marvel again, she could feel the pain of the gunshot. I have no idea how her healing works and I’m really curious to know more about it. It’s a good thing she has healing abilities. They always come in handy flying solo as a hero and when you don’t have your personal healing squad on speed dial. 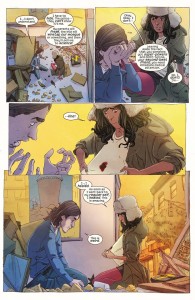 There was a very thought provoking conversation between Bruno and Kamala while they waited for the police to arrive. Kamala finally came clean about her previous superhero identity. People expected a long, beautiful, white female superhero, with blond hair and that’s why she felt comfortable looking like Ms. Marvel. Bruno helped her understand that she shouldn’t worry about what other people expected and she should just be herself. I liked how Kamala took hold of her Pakistani-American identity. She didn’t change her skin color, or hair, etc. when she introduced herself to the police, though she did wear a mask to hide her identity. There was a hilarious panel when she mentioned the NSA wiretapping her mosque and selling her to science. I think the panel touched upon the stigma some people feel towards Muslims and being of Pakistani descent while living in the USA. That’s what I like about this comic book series. It touches various sensitive topics but still retains its comedic nature. Bruno clearly has a crush on Kamala. I’m curious to see how the story handles such a relationship.

A boy going by the name ‘The Inventor’ officially became Kalama’s enemy this month. But first I have to talk about Kamala’s new costume. A panel showed her looking around her room for a ‘Burqini’. A burq-what? I had no idea about a burqini and thought it was some sort of a joke. But no, Kamala’s new superhero costume is actually a burqini! For years, Marvel’s female superheroes have fought crime in ensembles that resemble swimwear, but Kamala’s superhero get up actually is swimwear! I couldn’t stop laughing when I found out. I think that explained my intrigue when I wondered why she wasn’t wearing some sort of a variation of a female kurta when her official costume was revealed before her debut. She even wore a fanny pack. Not all heroes can afford a utility belt you know.

Anyway, Kamala broke into The Inventors hideout to save Vick. She used all her experience playing RPG’s in order to accomplish such a feat. From what I got from the story, The Inventor’s some kind of a technology genius. He even made bug-like machines that shot laser beams. The comic ended with Kamala trapped in a room with Vick, and The Inventor introducing himself. He didn’t come across as menacing and looked like a teenager himself. What made me worried was the dangerous looking gun he was carrying.

What did you think about this month’s Ms. Marvel issue? Feel free to share your thoughts!