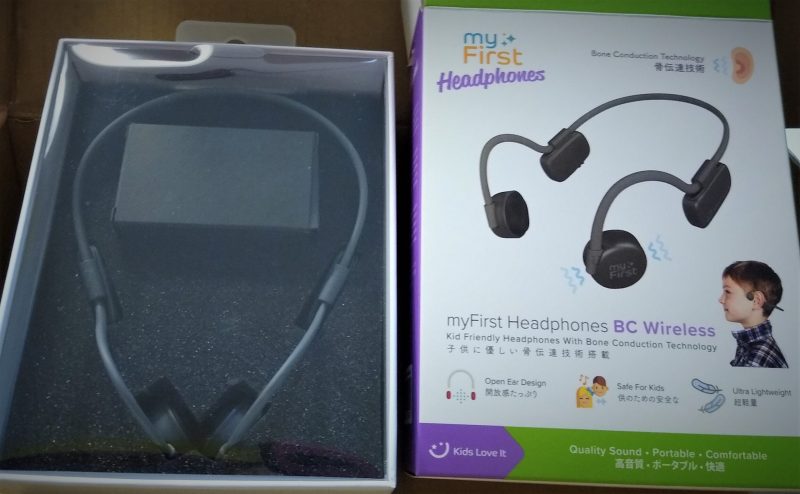 MyFirst Headphones could be the key to giving everyone in your house the chance to enjoy their own thing without cutting you off from family conversation… and they might actually last long enough to be a hand-me-down to younger siblings.

Note: We were given a free pair of MyFirst Headphones to try out. Opinions are ours and the test family’s.

We get a lot of requests for product reviews here at The Geekiary. We turn most down, but we do try anything that looks interesting. Some we try and have an absolutely fantastic time hating (remember the Hornet that tried to kill Bekah?). MyFirst Headphones fall into the category of things we took a chance on that turned out to be legit.

I tapped my best friend since high school, D, and her three boys (who we’ll call 3, 7, and 8 because that’s how old they are) to try these out.

These kids are basically my nephews and are made of absolute chaos. They’re both super smart and really active. Hanging out with them either means having an in-depth discussion with 8 about the “is Pluto a planet?” debate or running from a screaming bunch of hose-wielding children in the yard.

I adore these kids, in case you can’t tell. Besides that, they are the toughest critics I know. I threw the MyFirst Headphones to their tender mercies and waited to see what would happen.

The model we tried was the MyFirst Headphones BC Wireless. These headphones use bone conduction technology to transmit sound through the cheekbones. The main selling point is that they leave the wearer’s ears open to the environment- they can hear what’s going on, like a parent calling or an approaching vehicle.

They weigh less than an ounce and are water-resistant. The frame feels a little delicate at first – D says it feels like a fat wire hanger coated in plastic- but it’s very flexible. Everyone in the house from the 3-year-old to the 6’+ dad could wear it (though that last was a stretch).

The headphones are wireless via a Bluetooth connection and have a 15 meter range. It worked all through my friend’s big brick house, and audio was still good in a closet (where D was not hiding, she was testing connectivity).

First up, let’s talk durability. The manufacturer, Oaxis, says these can “survive whatever a child does to them”. That’s a heavy claim, though so far it does seem to hold up. 3, 7, and 8 all took a turn with the MyFirst Headphones this week, their dad put them on, and they still look like new. They flex back in the same shape and haven’t been damaged by spilled drinks or anything. D does think that 3 could probably break them if he tries.

So far he has not tried, because the boys really like these. I think 7 is the one who likes them the most, but 3 and 8 both wore them happily. 7 actually tracked D down while she was testing the audio quality at range because he wanted them back.

The headphones stayed on while they were running around the house. That’s impressive, because they move so fast D has trouble getting pictures sometimes.

The audio is very good without hindering the kid’s ability to hear what’s happening around them. Because it uses bone conductivity, the sound isn’t audible to those nearby. You do have to adjust the audio between apps, but you have to do that with every headset so it’s not a drawback.

Here’s a selection of the high points:

8 likes that the headphones talk to him. It beeps to get the wearer’s attention, and there’s a mellow female voice that announces when it’s connected.

Something D brought up that I didn’t think of is that the MyFirst Headphones are sensory-friendly. They’re very light, secure without being tight, and they don’t cover a child’s ears. If you have a kid who’s on the autism spectrum or has other sensory issues, these could be a lifesaver.

While our test family really liked these, there were a few small issues. They only use Bluetooth, so if your kid’s device is WiFi-only these won’t connect. That isn’t a huge problem for mobile use, but D has desktops for the boys’ schoolwork and those didn’t connect with the headphones.

The price is on the high end at $79.90. I think the features make it worth it. At the same time, that price point does make it a stretch for families with several kids. Oaxis has a version with a cord for half the price, but if you have a chewer you’re going to run into durability problems with those.

The only criticism the boys had was color. There are only 2 color choices, the gray we tested and a light green-blue. Maybe that’s because they’re a new product? Hopefully they come out with more options, or even styled versions like they have for their corded headphones.

So… Are MyFirst Headphones Worth The Price?

As a whole, we really like the MyFirst Headphones BC model. So does our test family. D is already planning to buy a pair for 8, since 7 has laid claim to these.

If they fit in your budget, they’re a good buy that looks like it will last a while. If they’re too pricey… well, the non-wireless version has all the same benefits except being cordless. It also comes in a lot more colors and styles at this point.

You can find out more or buy the MyFirst Headphones here. We don’t get a kickback from the link, though they did send us the product for testing.