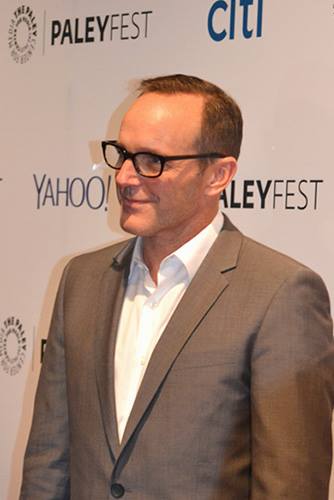 The Geekiary spoke with fan favorite Clark Gregg for a brief Q&A at Paleyfest New York this past Sunday. With Marvel’s Agents of S.H.I.E.L.D. in its second season, we discussed how Coulson holds it all together, the struggle to keep S.H.I.E.L.D. alive and stop Hydra, and the bonds that form between fellow soldiers.

Dot: Does Coulson have a strong idea in his head of what he wants to accomplish with S.H.I.E.L.D.? It’s been blown to bits, all chaotic, he’s in charge…is it more sink or swim, minute to minute, or does he have a long-term vision?

Clark Gregg: He definitely leans more towards sink or swim with regards to what it will take to rebuild S.H.I.E.L.D. […]One of those situations where your back is to the wall and all you can do is survive. It’s purifying! Very simple […]if they can manage to keep  S.H.I.E.L.D. from being exterminated, and kind of keep Hydra from accomplishing what they seem focused on accomplishing, which is using all these artifacts and weapons they got from S.H.I.E.L.D., to kind of reactivate themselves […]they were really taken down, in [Marvel’s Captain America:] The Winter Soldier. I think when he turns around and that’s been accomplished, a lot of what he’s hoping for […] that said, he’s got to deal with the fact that every symptom that he’s seen suggests he’s on […] some form of the same trajectory as the psychotic Agent Garrett, and that he may have to have Agent May put two in the back of his head.

Dot: Coulson is kind of a ticking time-bomb right now and carving weird things on the wall… 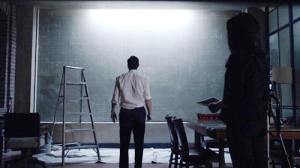 Dot: What do you think Coulson falls back on to stay focused, to not panic; what’s his inner coping mechanism?

CG: You know, he’s just barely holding it together. What I love about season 2 so far is it’s really clear that it’s a show about people who work in a job that doesn’t give them the right to have a family. So in many ways they are each other’s family. And so the threat that they’re up against, just trying to keep his own team alive, is enough to take his attention off what’s happening to him.

Dot: Coulson didn’t seem that surprised that May refused his request at the end of the last episode, but he does need her to do this for him. He needs her to do this really drastic thing, but he also understands she might be reluctant. What’s your take? 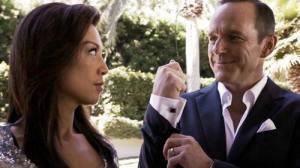 CG: He understands. In so many ways they’re kind of like a married couple, and every married couple you have to have that conversation, listen if you ever have to pull my plug, here’s what I need, I wish my wife didn’t seem so eager for that opportunity. He understands her position, but they’re also soldiers. It’s what cool about that relationship. They’re very intimate, they’ve known each other a long time, there’s a lot of chemistry of all kinds there, and they’re also war buddies. They’ve been in war together for years and there are things they expect of each other that most people never have to think about.

Screencaps courtesy of screencapped.net and kissthemgoodbye.net