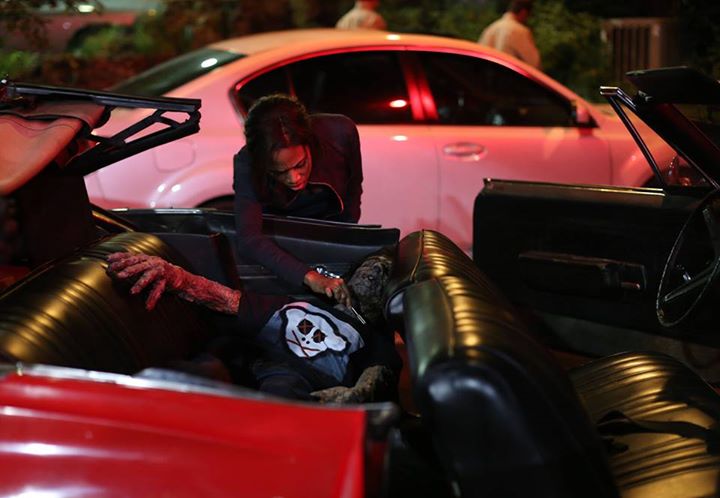 Every supernatural show eventually has a siren/succubus episode and that episode is almost always unimaginative and horribly sexist. Sleepy Hollow is no exception. As a monster-of-the-week story – the succubus stuff was the usual mess of misogynist cliches – this episode was pretty dull. Luckily “Heartless” still has Sleepy Hollow’s characteristic charm. This episode suffered from a severe lack of Jenny and Irving and way to much Hawley but seeing Katrina together with Team Witness almost made it worthwhile.

Basically, while the deus ex machina from the last episode managed to abort the demon spawn from Katrina’s body, it didn’t actually get rid of Moloch. Baby Moloch is out of purgatory and he wants his mother, but Katrina is too busy trying to repair her relationship with Ichabod, so Henry hires a succubus as a wet nurse and again the habitants of Sleepy Hollow pay the price. A couple of poor folks with “secret desires” fall prey to the succubus before Abbie, Ichabod, Katrina and unfortunately Hawley finally destroy it.

The succubus stuff was pretty straight forward, there was nothing particularly innovative or interesting in Sleepy Hollow’s interpretation of this well worn myth. She’s a demon seductress who sucks the life force out of people that have secret sexual/romantic desires. They do get props for debunking the idea that only men are susceptible to the siren’s song by including a young woman who gets seduced by the succubus because she was into her female best friend. (The funniest part of the episode was that douchedude that thought she was into him because she hung around him a lot – it was funny because it’s true). 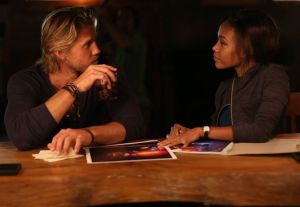 Speaking of douchedudes – Hawley was forced into the story again with an even flimsier excuse than last time. It might be artefact related? There was nothing to suggest that. Stop shoehorning Hawley into every episode because he’s the worst. It was rather nice to fantasise about Abbie and Ichabod arriving too late to find Hawley’s body sucked dry, but that was wishful thinking. Instead of dying, Hawley stuck around to push a romance between himself as Abbie.

It’s not that I’m against Abbie getting a love interest – I’m a little resentful that this forced romance is taking time away from other beloved characters like Jenny and Irving but I understand the impulse to give her a little romantic distraction. Abbie needs something to do while Ichabod and Katrina are playing out their doomed romance, and she’s still way to guarded in matters of love so it will be nice to see her let go a little before her heart is broken again. But Nicole Beharie and Matt Barr have very little chemistry, especially next to the magic that is Behave and Tom Mison. And their potential romance has been so poorly done that there is nothing left to do except hope that it’s all part of a greater plan. Plus the idea that they are leading towards pitting the Mills sisters against each other for some random dude is too horrible to think about.

Succubus storyline aside, the overarching theme of evolving relationships and secret desires worked well. We finally got to see Ichabod and Katrina interact with each other as a couple, and I’ve got to say if their relationship consists of them arguing over reality TV I could actually get behind it. It’s also nice that they didn’t ignore the growing trust issues between the couple. Sleepy Hollow has long been questioning Katrina’s allegiances and building towards a possible turn to the dark-side (an idea that was ramped up at the end of this episode). She’s clearly got shades of grey, which is pretty problematic for poor Ichabod and his narrow ideas about love. This episode he was forced to acknowledge that he doesn’t really know his wife, and Katrina had to realise that she couldn’t play the role of doting wife anymore because Ichabod knows that’s not who she is. She’s a spy and a witch and apparently an idiot because she thought it would be a good idea to go back to the hapless and hopelessly in love horseman of death.

Remember when the headless horseman was something to be feared? He was a big scary bad guy and now he’s a figure of pity. Don’t get me wrong, his obsessive desire for Katrina is all kinds of creepy and he’s still on Team Apocalypse so it’s not like he’s a puppy but he’s just a patsy and it’s kind of sad. 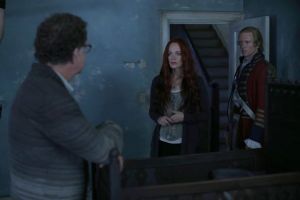 Katrina’s not everyone’s fave character, but I’m sorry to see her leave Team Witness so quickly because she was finally becoming more than just a plot device held together with a bunch of sexist tropes. The few moments she had with Abbie were great. It was nice to see them fight over strategy rather than Ichabod’s affections. Abbie even admitted that her and Ichabod were better with Katrina on the team, which was true because she brought plenty to the table during the monster-of-the-week shenanigans. But alas, just as we saw the beginnings of a firm female friendship (this episode passed the Bechdel test yay) Katrina decided she should return to Abraham and use his affections to get close to Baby Moloch and kill him. Of course she didn’t count on Moloch being an adorable little baby.

Anyway, this episode was all right but this season has a been a little disappointing so far – like it’s waiting for everything to kick into gear. Hopefully that happens sooner rather than later.

What did you think? Do all the baddies have to abide by government regulations and apply for permits to perform evil in a graveyard? Did Katrina return to Abraham because he got her the right tea? Why does Hawley exist? Let us know in the comments.

Previous:Gotham 1×8 Review: “The Mask”
Next: The Walking Dead Volume 22 Review: A New Beginning