The Sims 3: Into The Future – Game Review

I am a huge fan of The Sims franchise and I’ve played all of the installments. The Sims brought something new in the gaming genre when it made it’s debut in 2000, followed by The Sims 2 in 2005, and then The Sims 3 in 2009. As it’s predecessors, The Sims 3 got it’s own set of expansion packs that added new features. The most recent expansion pack is titled “The Sims 3: Into The Future”, and it brings some freshness to the series until fans wait for The Sims 4 to be released in 2014.

As the name implies, the new expansion pack brings time travel to the series. It’s something that the fans haven’t seen before. The previous expansion packs were somewhat related to what we’ve already played in the previous series and that’s why I quite enjoyed the newest release from Electronic Arts.

In typical ‘The Sims’ fashion, the first thing you are going to notice are all the new gadgets and furniture. Playing up the futuristic theme your Sims can buy holographic TVs, food synthesizers, tube elevators, rooftop gardens, automatic-sliding doors, glass floors, and a variety of hoverboards as well as a jetpacks. The new clothing styles and hairdos are something you might expect from a sci-fi film. Some of the styles seem to be inspired by the Mass Effect series. You also get some customizing options when it comes to what you want your Sims to dress up like. A lot of the clothes have a geometric shape to them. You can also give your Sims a ‘Tron’-like look with glowing clothes and some cool shades.

The major things in the game are the “Plumbots” and “Future Travel”. Plumbots are robots that your Sims can buy and do with them as they please. These robots help with the household chores and it’s up to you if you want to make them a slave or a friend. You can put in a ‘trait chip’ for options like Fear of Humans, Capacity to love, and Sinister. This allows your Sims to interact with his or her Plumbot in different manners.

With the “Future Travel” feature you get to meet a mysterious Sims who comes to your town and gives you a time portal once you help him by collecting the power cells scattered around your Sim’s lot. This allows your Sims to travel into the future and into a sub-neighborhood named ‘Oasis Landing’. The architecture in the new location is amazing. Everything is futuristic and the dimensions are nice to look at. The art team has worked hard and it shows.

The new career options are: Plumbot Dealer, Plumbot Trainer, and Astronomer (though I didn’t know that astronomy was something that was specific to the future…but oh well!)

You can also mess up the timeline by moving your Sims from the present to the future and vice versa. You can meet the descendants of your Sims and yes, you can mess up their lives! Travel the future, mess some things up, head back to the past and see what happens or you can do it the other way around. Congratulations, you are now a “Time Lord”! 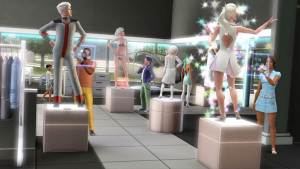 However, with any expansion pack, the novelty does seem to fade after a while. The Sims franchise has a lot of replay-ability but only when a new expansion is released. As The Sims 3: Into The Future seems to be the last expansion pack in the third series, it shows what we can definitely expect from the fourth series that will be coming in May, next year.

There’s no denying that the newest expansion pack has a lot to offer. The jetpack and the hoverboards are fun. Who hasn’t dreamed of riding a hoverborad ever since the Back To The Future II came into our lives? The gameplay hasn’t changed much. The newest interactions are the ones your Sims will be having with the robots. The graphics haven’t changed much, either. It’s the same Sims 3 but with new features that are quite enjoyable and will keep the fans satisfied for a few more months.

So, sit back and enjoy seeing what the future looks like for your Sims while we all wait for the fourth main series.