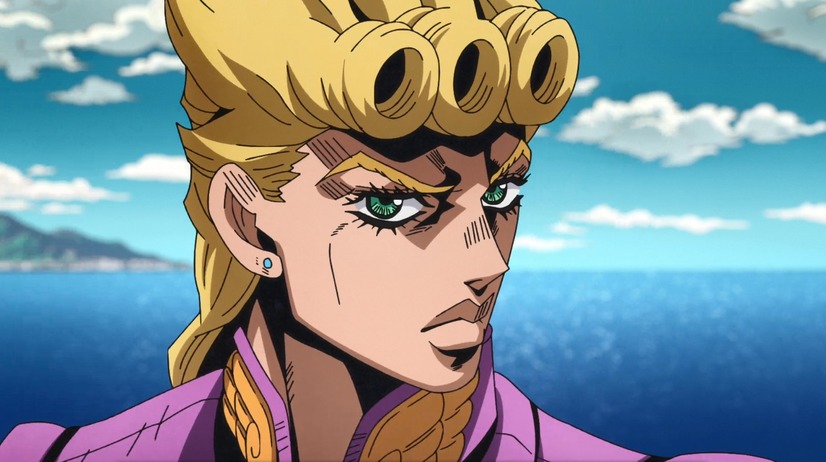 Ever since 1987, Hirohiko Araki has been writing the downright wacky Shonen series, JoJo No Kimyou Bouken, or JoJo’s Bizarre Adventure. Featuring vampires, ghosts, even aliens, this series gets more and more nuts as it goes on. Vento Aureo is no exception.

While most shonen anime tends to get wacky and weird (such as the ongoing series Boruto; See Faird-ul-Haq’s review of the latest episode! ), there’s none as bizarre and wild as JoJo’s Bizarre Adventure. Vento Aureo gives old fans the same JoJo feel while also being accessible to new fans.

In its wildest part yet, JoJo Part 5 follows Giorno Giovanna, son of infamous vampire Dio Brando, on his quest to rise through the ranks of the Italian mafia, and become a Gang-Star! This is hardly a normal gang, though. Rather than simply using weapons and fists, these gangsters use manifestations of their energy, known as stands, to settle their disputes and grudges.

The gang in question, Passione, has become quite an issue, dealing drugs, murdering innocent people, and committing the horrid crimes they’d sworn not to.  Many members before our protagonists have attempted to overthrow the mysterious boss, but all who attempted to discover his identity died soon after. Regardless of this, Giorno and his fellow gang members, Bruno, Abbachio, Fugo, Mista and Narancia decide they’re going to be the ones to reveal his identity.

Though newcomers to the series may be somewhat confused at first, Vento Aureo is still a great introduction to JoJo’s Bizarre Adventure. This season is detached and unrelated to the rest of the series, being somewhat like a side story. No prior knowledge is needed, though I do recommend giving the rest of it a go.

What’s a plot without its characters? Without the wonderful characters of Vento Aureo, the series would be dreadfully dull. No one wants to see the same cookie cutter characters every scene. While the protagonist is admittedly a little lackluster, I found nearly every other character to be as deep and complex as a person in real life. Each character has their own motivations, backstories and relationships, such as Abbachio’s life as an ex-cop, or the rocky brotherhood between Pesci and Prosciutto. Main characters and side characters alike recieve their own arcs and development throughout the season, regardless of their position. 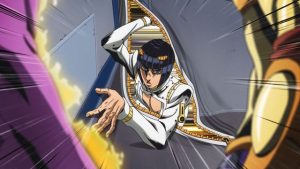 The plot is generally advanced through combat scenes lasting up to about two episodes. Each and every battle is unique, featuring brand new tactics and strategies each time. Just when all seems lost, our protagonists use a new all-out attack to defeat their enemy each time. While this sounds like it could become boring and predictable, each tactic they use is so unbelievably different from the next that no one could possibly have a clue on how they’re going to attack next.

The most interesting part of these intense battles, however, aren’t the techniques. As mentioned before, every character has their own stand- a physical manifestation of their energy and soul. Each stand is based off a different band, album or song, including artists like the Sex Pistols, The Moody Blues, and Aerosmith. No two stands have the same appearance or ability. It makes for bizarre and awesomely awesome combo attacks when two stand users pair up. A personal favorite stand of mine is Bruno Buccellati’s stand, Sticky Fingers, with the ability to create zippers on any surface or object and open or close said zippers at will. This ability can be used to pull apart someones body without injuring or killing them, proving useful in many episodes.

Alongside its intriguing characters, combat and story, Vento Aureo is what I like to call “Eye Candy”. Every character is clad in some real avant garde looks, creating a real unique fashion show. The color palettes and fashion combined with the dynamic,  moving animation create a gorgeous visual presentation that truly brings Araki’s original manga to life. The music featured alongside the animation sets a dramatic tone for the series, and Coda’s vocals in the opening are to die for.

This season has truly proven itself to be a masterpiece of animation, a gorgeously unique piece of work that creates a Golden Experience for newcomers and old fans alike. I highly recommend taking the time to watch Vento Aureo, a grand installment of one of the most over the top shonen animes in history.