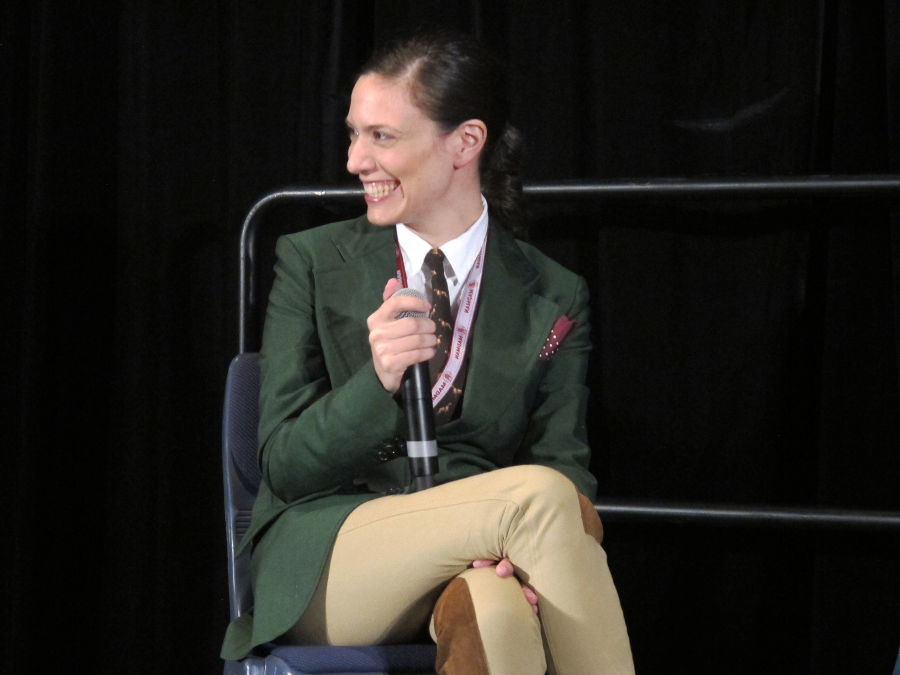 A couple of weeks ago I got a copy of the upcoming Australian release of Captive Prince by C.S. Pacat. I didn’t know much about the book except that it began as a free online web serial, which had then become an e-book before finally getting picked up and published by Penguin. After I published my review – I loved it in case you’re wondering – I discovered that the story already had a dedicated following including many people in my own friendship circle. Let me tell you, I am going to have words with everyone that didn’t force me to read this story before now.

Q: Do you think the fact that Captive Prince was written as an online serial – and involved direct reader interaction – affected the story you were telling or the way you told it?

C.S. Pacat: “Yeah absolutely, for three reasons… The first two ways are the simplest ways. The serial format really allows you as a writer to interact with your audience directly. And as an artist there’s so many moments where you have to be kind of vulnerable and by that I mean write something that might seem embarrassing or like ‘aw no that’s too sentimental, that’s too this, that’s too that’ and it’s really easy to back off from those moments. But because the audience was there and they were really supportive I got to learn, it’s when I’m feeling at my most vulnerable and like ‘aw should I be doing this?’ That’s the moment when the audience responds the most. So that’s the most powerful stuff.

“Another simple reason was people would develop passionate caring for a character that I didn’t realise was important at all, like guardsmen B or something would get a dedicated fanbase. And then I’d realise I have to go away and actually think about this character a little bit more. And I think if not for that meticulous caring of the reader-base I might have been a little bit lazier about that kind of stuff.

“From a more profound sense – the online space is, it’s like fucking amazing right? And there’s so much creativity that comes out of that space… Web serials and online fiction, that’s tens of millions of writers and readers. If you add fan fiction, that’s hundreds of millions of writers and readers and they’re all creating completely unwatched by commercial interests. In the dark, evolving for 20 years and I feel as if when you think no one is watching you, when you think there’s no eyes on you, the kind of creativity that you’ll engage in is completely different and it’s remarkable.

“Everyone in that community feels it right? We go there because we’re seeking something we don’t necessarily think we’re gonna find in a commercial bookstore. And maybe we create there because we somewhat feel like maybe the commercial space is telling you – don’t make that work here. And so amazing exciting stuff is happening. If you think there’s a dollar sign attached, even if your identity is attached, all those pressures change things. People write different works under those conditions. So I feel like people have been beta testing in that space for 20 years work that the wider culture is right on the cusp of commercialising. And I feel like unless – without all of that creative energy I couldn’t have written Captive Prince.

“I feel like literature is about building on what came before, it’s a forward moving enterprise. If there’s nothing that came before, you can’t build. Without the online space I can’t make Captive Prince; that book simply wouldn’t exist because it has no literary antecedence in the commercially published world. There’s no Game of Thrones, we don’t have that tradition. So yeah it influenced me, I don’t think the book would exist without that world.”

Q: Have you noticed a significant change in your audience since publishing Captive Prince through a traditional publisher?

C.S. Pacat: “Yeah my online readership was an online readership, and it’s kind of a different space and it can be a more accepting space and now that it’s kind of out in the wider world… there’s three markets that I’m noticing that it’s penetrating into. Oddly enough in Australia there’s some kind of traction with the literary establishment. We’re getting reviews in literary papers and it’s getting read with a literary eye. I had an interview the other day where the first question I was asked was ‘so are you influenced at all by the Homeric epics?’ “I’m absolutely delighted that world is reading the book, I wasn’t expecting it because I think online we’re taught ‘our work’s a bit secret and our work’s not for broad consumption; maybe it shouldn’t be out in the light’.

“Mainstream fantasy and mainstream romance readers as well seem like they’re more open than I anticipated. They seem like they’ve really embraced the book. I’ve got heaps of people that have been saying ‘I’ve never read m/m before – I didn’t even know what I was reading when I picked it up but I read it, enjoyed it’. That’s all been amazing.

Q: The story involves what some people might think of as sensitive material. Have you experienced any backlash?

C.S. Pacat: “Not yet… there are readers that it’s simply not to their tastes and I’ve had that happen, we’ve all had that happen. I don’t think there has been any backlash. Everyone has just been really enthusiastic about it… maybe the backlash is still to come.”

Q: How do you feel about people writing fanfiction about the characters in Captive Prince?

C.S. Pacat: “I love that they’re writing fan fiction about my characters, and the only sad tragic part of it is that I cannot read it. I feel I can’t just because I don’t think it’s appropriate in the sense that I might get influenced by what they write. I think it’s important to keep my version intact. I wish that I could read it, every now and again I’ll hear someone on the periphery of my social media where someone will be like there’s a blah blah AU of Captive Prince and I think WHY CAN’T I READ THAT? But I love it.”

Q: If you could put Laurent and Damon into any alternative universe what would you choose?

C.S. Pacat: “Oh my gosh, that’s too hard to do because the original version’s too strong. That’s for someone else. Maybe an arranged marriage AU?”

Q: Fans of both the published books and the online serial are eagerly awaiting the third installment. If you could tell your readers one thing about the book what would it be?

Q: The tag for The Geekiary is “We’re fans, we have feelings,” so I always like to ask what gives you feelings, what are you a fan of?

C.S. Pacat: “My favorite writer is a writer called Dorothy Dunnett. I’m ridiculously fannish about her Lymond series and it also was a big influence on Captive Prince. The anime that I’m most fannish about is Utena. I re-watched a bit of it last night because I saw a girl in an amazing Utena costume. And I’m slightly fannish at the moment about the TV series The Vampire Diaries.”