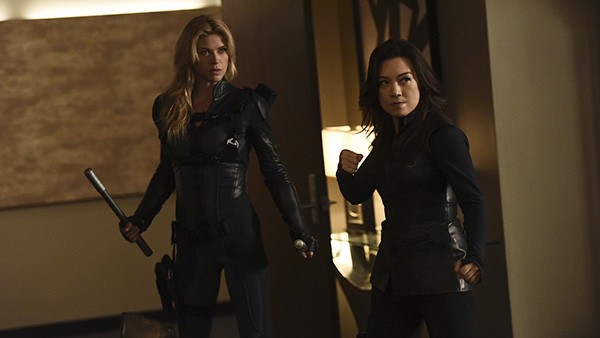 Last week’s episode of Agents of S.H.I.E.L.D. was so awesome that I kind of forgot about everything else that was happening, so the “previously on” for  “Among Us Hide…” was like being hit with a brick wall. It was a pretty safe bet that Dr Garner wasn’t dead but that there would still be exciting stuff happening. Really it’s a testament to my distraction that I didn’t see where the Lash story line was heading until about halfway through the episode. Solid episode with some solid moments, even if it wasn’t the high point of the series.

Lots of stuff happened this week on Agents of S.H.I.E.L.D. Dr Garner is alive, as is Hydrabro Von spawn. Ward was around, searching for his protege, but he wasn’t being crazy town banana pants enough for my liking. But Ward’s found a new daddy now so stuff should get good soon – hi Gideon Malick! Coulson is still on the path to supervillainhood, hanging out with Rosaline as she attempts to humanize herself with a dead husband. No one is buying it though – especially not Daisy – because she’s keeping Inhumans in jars. Not cool. Also Dr Garner is Lash. Surprise.

As shocking as this might be for some of you to hear, I actually liked Hunter in this episode. Mainly because everyone was treating him like I have for the last season and a bit… like he’s a bad smell that they just can’t get rid of. Seriously if they make Hunter the butt of everyone’s joke then that is something I can 100% get behind. Like “it’s your turn to have Hunter this week” –  “Aw man really?” Hunter is the most annoying, they should really lean into it.

The best team-up of the episode was definitely May and Mockingbird. I love that the moment she ditched Hunter, May automatically leveled up and went after Bobbi as her Kill-Ward partner. Let’s be real, if anyone can – and should – kill Ward it’s got to be these ladies. Hunter’s silly little revenge quest was boring as all get out, but Melinda and Bobbi working together to take down the worst dudebro in the world is exactly the kind of thing that gets me going.

Fitz and Simmons didn’t have much to do in this episode, which is fair considering how much their story line was developed last week. There was a great moment where Fitz basically told Hunter to buzz off for being a misogynist asswipe. As long as it doesn’t turn out that Fitz took his advice and lied to Jemma at the end of the episode then it might be one of my fave moments of the season. That and Mack’s face every time Hunter does, well, anything. There was annoying glimpse of boring whiteboy no. 2 (a.k.a. Lincoln) at the end of the episode, but it was mainly to show that Dr. Garner is all kinds of sinister.

While this episode wasn’t exceptionally memorable – not much could be after “4,722 Hours” – it was an excellent example of what a solid show Agents of S.H.I.E.L.D. has become. It’s pretty much consistently on point this season, which is great fun.  I can’t wait to see where all of this is going – especially if they really do decide to make Coulson evil. Pray for evil Coulson with me, Geekiary peeps!