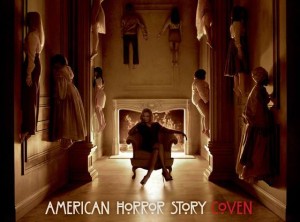 Last week’s episode left us with Cordelia getting some sort of solution thrown at her face, and the young witches ready to take on a horde of zombies. This week’s episode picks up from there, and though there were some cool, though funny, zombie killing scenes, it was all about mother and daughter relationships. Along with the usual dose of how devious Fiona can be in order to get what she wants.

I liked that the writers took time to show how the two mothers, Fiona and LaLaurie, treated their daughters. In LaLaurie’s case, we knew she was a bad person, but what took me off guard was that she was evil towards her three daughters as well. She locked them up in her attic in order to discipline them and even broke the leg of the eldest. Yes, the girls were trying to come up with a plan to kill their mother. But who could blame them? They’ve been living their lives with a monster they couldn’t expose.

What I didn’t get was how the writers were trying to make the audience feel sympathy for LaLaurie. Yes, she regrets what she did to her daughters and even calls herself a monster, but I can’t get myself to feel sorry for her. Especially not after the episode showed the rest of the inhumane things she’s done in her life. Almost half of the season has ended, and I still can’t figure out the purpose of such a character. I haven’t seen Fiona taking the time to examine her in order to find a way to become immortal. Maybe LaLaurie’s journey is to see all of her wrongs and to make amends? I don’t know how she will even begin to make those. Laveau won’t forgive her, and her daughters are dead, along with the rest of the slaves she tortured. She has made some progress with Queenie but I don’t think that’s enough.

As far as Fiona and Cordelia are concerned, we know they don’t like each other. But I doubt Fiona ever did to her what LaLaurie did to her children. I think the trouble between Fiona’s and Cordelia’s relationship is because of ‘emotional neglect’. However, the episode showed that Fiona really loves her daughter, and she knows she hasn’t always been there for her. I was surprised to see that the Supreme had the power to bring a still-born baby back to life, but was helpless when it came to fulfilling the wish of her own daughter. The emotional scenes added another layer to Jessica Lange’s character. Though we saw an emotional Fiona, the feelings of sympathy kind of faded away when we see her manipulate the council in order to frame Myrtle for her daughter turning blind. I’m still not sure if what the episode made us see was real or if it was tricking us into thinking what Fiona wanted us to see.

It was a fun episode, with a few scenes that felt out of place, especially the scenes involving the zombies. No! I don’t care how much you change the zombie lore; you can’t kill a zombie by stabbing it in the heart! And then there was the whole, ‘Zoe going Evil Dead/Chainsaw lollypop’ on the zombies and slicing them all to bits. I laughed at that scene. And why would Laveau make the zombies kill two innocent guys who just happened to walk into the premises because they were impressed by the ‘zombie costumes’? I never put Laveau down as someone who would kill innocents.

About the progress made regarding the ‘Who is the next Supreme?’ question. It’s still up in the air. We don’t really know what makes a witch a Supreme. Madison was able to perform different tasks but she wasn’t a Supreme. So, I don’t know if Zoe, being able to end Laveau’s voodoo makes her a Supreme or not. Coming to Zoe, I was glad to see her character grow. She took control of the zombie situation and ended up saving the coven. So, good for her! On top of that, Cordelia had some sort of clairvoyant awakening that allowed her to see what her crazy husband had been up to. So, maybe it’s her who will take the mantle of the Supreme? That would be exciting to see because what will Fiona do then? Will she kill her own daughter in order to keep her strength? Or is it going to Misty? She does seem to have mastered her resurrection power. She brought back a burnt Myrtle and I think those two will team-up and try to take down Fiona once and for all.

I’m looking forward to more mother-daughter interactions, now that Cordelia is blind and Fiona looks like she wants to make amends. There are still a lot of questions that need to be answered and I can’t wait for the rest of the season.