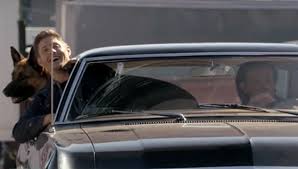 The happiest we’ve seen him in years

I’ll start by saying that this episode is bad.  It is so bad in fact that it is actually good.  And I mean that in the best way possible.  It is just so corny and ridiculous I laughed while watching it, but I have the sense of humor of a twelve year old so while most of the fandom was groaning at the bad jokes and wondering when the episode would come to its conclusion, I was laughing so hard that I cried.

There are of course the inevitable dog jokes, both verbal and physical comedy, as Dean takes an Inuit potion in order to speak with the only witness of two murders: a German Shepard named The Colonel. 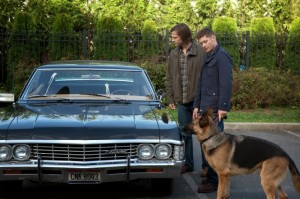 Dean about to have a showdown with a pigeon

We find out that animals have their own universal language through an epic scene between Dean, a pigeon, and Baby’s windshield; and let me just tell you that when Dean pulls a gun on the pigeon, just oh my god, I nearly died.

Pop culture references are a calling card of Supernatural, so for those of you paying attention, there is a blink and you miss it shout out to Sharktopus, and Breaking Bad and a more obvious Game of Thrones homage in the taxidermist shop. 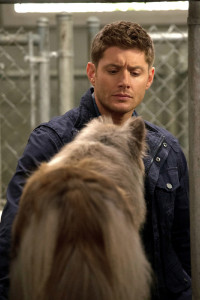 Dean communing with a pooch

Jokes aside, the villain of this story is unique in a way that Supernatural is known for. First, he isn’t supernatural at all, just a man with cancer, but he’s dabbling in Shamanism (which the show made out to be some kind of variation of witchcraft) in that if he eats various parts of animals along with special herbs and chants, he gains the abilities of those animals.  Apparently this practice helped to ‘cure’ his cancer for a short time, but it would always eventually wear off and he’d have to resort to eating more animal viscera.  I love the irony that he’s a chef blending new recipes of animal parts, and that his French restaurant (a perfect cover as no one will question you twice for having owl brains in the freezer) apparently does well enough that it’s closed on Mondays.

But for all this, there are actually a couple of places in the episode where you have serious dialogue and foreshadowing. Let me just remind everyone that Sam is not stupid, so when his throat is mauled and we see Zeke step forward long enough to heal him, you know that Sam has to be wondering what just happened there.  Especially as he has a witness to this miracle healing, which he can’t explain in any way whatsoever.  Dean’s final speech in the episode, “He was possessed by something he couldn’t control. It was inevitable that it would take over,” is either a foreshadowing for how Zeke will eventually take control of Sam, a warning to Zeke that Dean’s watching him and one wrong move and he’ll be out of Sam faster than Dean can eat pie, or it’s a reminder for Dean himself, that there is an uncontrollable force within his brother, and that he needs to be vigilant.

all images copyright the CW