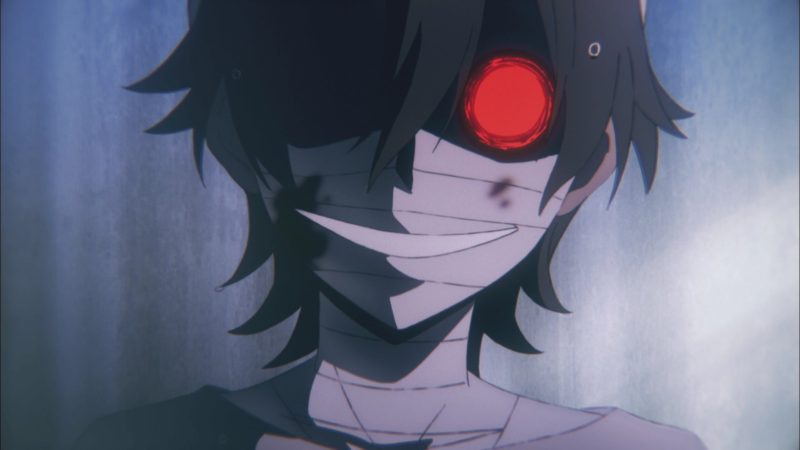 Things start out looking fairly bleak in episode 8 of Angels of Death. Zack had just cut himself open with his own scythe just before the end of the previous episode. He really isn’t doing well and Rachel wants to do what she can to help him, and fast. She’s very hyper-focused on helping Zack so she can help him escape the building and in turn kill her, like he swore to God he would do.

When I was playing the third episode of the Angels of Death game, I didn’t realize just how creepy Rachel was acting during the gameplay. It may because of the swirly purple graphics due to whatever Father Gray was drugging Rachel with, or just the gameplay mechanics in general. But, while there have been many small hints along the way about Rachel, I feel like this is the first episode that you can really see how “not right” Rachel is. She shows no remorse for the zombies she takes out of the reaching hands near the gravestones that scream when she stomps on them, all because they were in her way. She also doesn’t really seem to care that Father Gray is testing to her. She’s very singly focused.

While getting a clear picture of who Rachel really is, I think what I enjoyed most about this episode is getting a further glimpse into Zack’s childhood. He’s a ruthless serial killer, but you do end up feeling a certain amount of sympathy for how hard his life was. Most of his body is covered in burns (hence all the bandages) and has been since he was a young child. He was dropped off at an orphanage that wasn’t legit, where the people who ran it made him bury the dead bodies of other children, so it’s really no surprise that Zack’s so messed up.

It was brutal seeing his past and all the people he killed within a couple of days after killing his caretakers. Zack couldn’t seem to stop himself once he got started. As he mentioned in the previous episode, if he was able to control himself, he wouldn’t be in this situation in the first place. (Being in the building that allowed for him to kill even more people).

For those who aren’t familiar with the game, there’s a surprise or two regarding just who or who might not actually be dead. Be prepared! Angels of Death is only going to get weirder, quickly, from here on out!