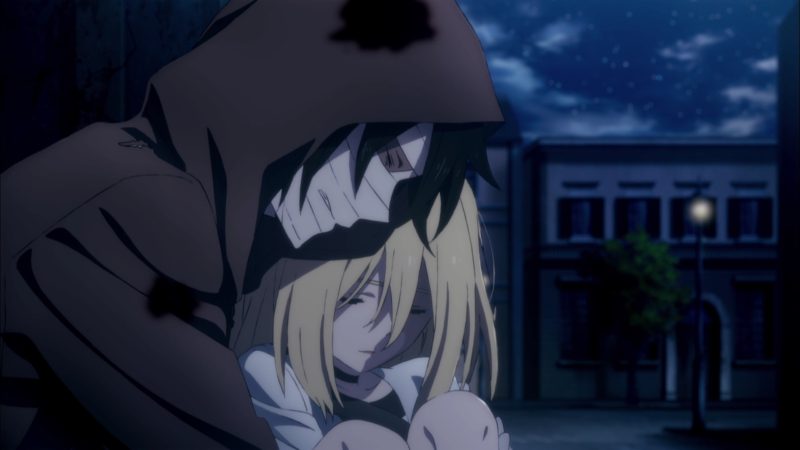 The previous episode of Angels of Death left us with a cliffhanger. Were Zack and Rachel going to be able to leave the building, or was Danny going to kill them? Episode 16, “Stop crying and smile” doesn’t make us wait too long to find out. With Father Gray looking out for them, Zack and Rachel were able to escape Danny.

With Zack and Rachel gone, Father Gray takes a moment to reflect with Danny. He explained how he had always thought that Zack had “hidden wings.” He truly believed that Zack’s simplicity and single-mindedness in killing meant that he was an angel. When Zack began to care for something (someone in this case) aside from killing; this is when Father Gray realized that Zack was human. Everyone in the building was human. They were all ugly and beautiful. Every decision they made was human. Honestly, that shouldn’t have been such a huge revelation to Father Gray or Danny, but I digress.

I think the final escape scene in “Stop crying and smile” was one of my most favorite of the series. Zack seemed so helpless, nearly in tears coming out of the building with Rachel, begging her to open her eyes. He didn’t know what to do to help her. When the police show up, he figured that is what Father Gray meant when he said that that was how Zack could save her at the end of episode 15. He didn’t attempt to escape and resigned himself to his fate. (Or did he? He once again said to an unconscious Rachel to remember that he had promised that he would kill her.)

Keeping with the RPG Maker game, this last episode of the series is a little strange and different from the rest. Mostly this is because Zack and Rachel actually do manage to escape the building early on in the episode and much of it is spent focusing on Rachel and what happens to her after the police take her from Zack.

In Rachel’s therapy sessions, she was mostly quiet and kept asking about Zack for a time. From news reports, it becomes apparent that Zack asked after Rachel as well to make sure that she was okay. Eventually she stopped mentioning Zack and her therapist did let her know that Zack had been sentenced to death for the murders he had committed. Her therapist thought that would help put Rachel at ease and help her sleep in peace. In truth, Rachel hadn’t slept that well at all since she and Zack had escaped the building.

That same night, while Rachel is trying to sleep, Zack breaks through her window with a new scythe. Upon seeing 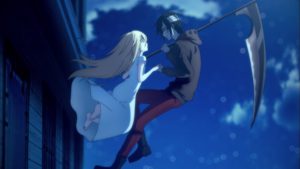 Rachel, the first thing Zack says to her is, “Damn. There’s that boring look on your face again.” Rachel was a bit confused as to how Zack was there as he was supposed to be in prison. His response was, “Yeah, well… obviously, I left.” After escaping that building, it’s not too surprising that Zack was able to escape his prison cell as well! After once again confirming that he would kill Rachel, they make their escape from the psychiatric hospital. He does remind her that she has to smile first though.

The ending of “Stop crying and smile” is very open-ended. Does Zack actually kill Rachel? She wants him to and he promised that he would. Would she smile enough for him to do so? We don’t know. And I’m sure it’s a frustrating ending for some, but I’m actually okay with it. With such an ending, the sky is kind of the limit on how their story could continue on. Obviously Zack could kill her, or she could decide to live and they could go off terrorizing the country. For those who haven’t played the computer game, don’t feel cheated. Spoilers ahead; the game ends in the same way. Who knows? Maybe there will be a sequel someday. I’d be interested to see if their story goes on!

Overall I was very happy with the Angels of Death series. I felt that it stayed mostly true to the computer game and added more story and depth on top of it. I’d highly recommend the series to anyone who enjoys psychological horror or would like to see an anime that’s a little bit different.