Angels of Death: the Game, the Manga, and now the Anime 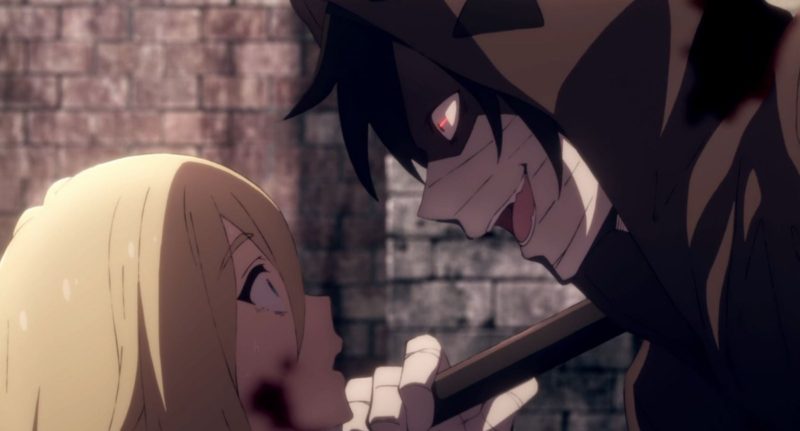 When I had first heard about Angels of Death as an upcoming anime on Crunchyroll, I was intrigued by the title. After seeing a few screencaps on Twitter, I decided to check it out. I knew it was based on a game, but I didn’t know anything about the anime beyond that.

Angels of Death was originally a horror RPG Maker game made by Makoto Sanada and was released in four segments through the Den Fami Nico Game Magazine website. It is available in English on Steam and Nintendo Switch. While technically in the horror genre, it doesn’t have any jump scares and the good majority of the game is story-based. There are some sections where there are puzzles to solve or characters to run away from. I have played all but the last episode of the game as of this writing. 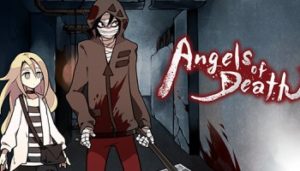 The game focuses on an amnesiac character, Rachel Gardner, who finds herself in a multiple floor building where each floor has a person who is looking to kill her on it. She teams up with a serial killer, Isaac “Zack” Foster on the first floor. Their interesting camaraderie and later friendship is really the best aspect of the gameplay. I find the game to be very enjoyable overall. One of my favorite things to do, playing as Rachel, is to keep talking to Zack until he gets super annoyed. And also the fact that Zack, a serial killer with a scythe, finds Rachel so disturbing, is hilarious!

The game was eventually adapted into a manga series comprising of seven volumes. The first three volumes (with the fourth coming out on August 21) have currently been translated into English by Yen Press. The manga follows along with the game fairly well from what I’ve read of the English manga (volumes 1-3) while adding more backstory to the characters than we see in the game. Danny comes off as even more disturbing in the manga and we are given a backstory for Eddie that we didn’t see at all in the game. It made me feel a little bad for the character, but mostly he still just disturbs me.

The manga may be based on a horror game, but the art in the manga is appealing and at times quite beautiful. 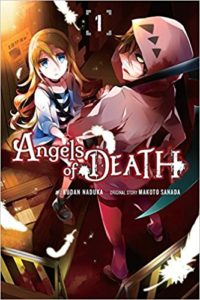 Perhaps that is because it was first published in a monthly shojo magazine. Having said that, however, I will emphasize that Angels of Death is not a romantic story. Rachel is 13 and Zack is somewhere in his 20s. At most, they can kind of be seen as unrelated siblings of sorts.

Now, Angels of Death has been adapted into an anime which is currently being aired in Japanese on Crunchyroll (Fridays) and in English on Funimation (Tuesdays). The dub is three episodes behind the sub which currently just released its seventh episode. The anime will have 16 episodes total.

I think one of the most fun aspects of the anime is how it brings the pixel retro-looking RPG Maker game to life. Many of the rooms and hallways I remember having Rachel and Zack walk through in the game are shown in the anime. They are immediately recognizable. The art style in the anime is definitely my favorite, while still reminiscent of the game art. Zack’s character design is especially nice to look at, despite his being a bandage-wrapped degenerate, carrying a scythe.

The anime is not simply a walkthrough of the game. The overall storyline does align well, but it doesn’t go through each puzzle or scenario in the game. And some of the puzzles are altered a little bit to work better with the anime format. It is also obvious that some of the scenes took inspiration from the manga art.

Zack and Rachel sound like I pictured them sounding like for the most part while playing the game. Rachel is quiet spoken and bored sounding while Zack is loud, brash, and prone to maniacal laughter. The voice actors both in the Japanese and English versions of the anime seem to be perfect for the characters. Zack is especially fun voiced by Dallas Reid in the dub version. He sounds exactly like I would have expected Zack to sound while playing the game. And props to Reid, who does have experience with another loud character, Asta in Black Clover. He pulls off Zack’s maniacal laughing perfectly and apparently lost his voice with all the screaming Zack does in the most recent dubbed episode.

I highly recommend Angels of Death to anyone who enjoys the horror genre and/or RPG Maker games. And if you do decide to check out the anime, I would suggest playing the game as well, or at least watch a playthrough on YouTube. Angels of Death is an enjoyable story in all of its formats. I personally can’t wait to see how the anime continues, how close it will stick to the game and the deeper character insight that I’m sure will continue to be provided.