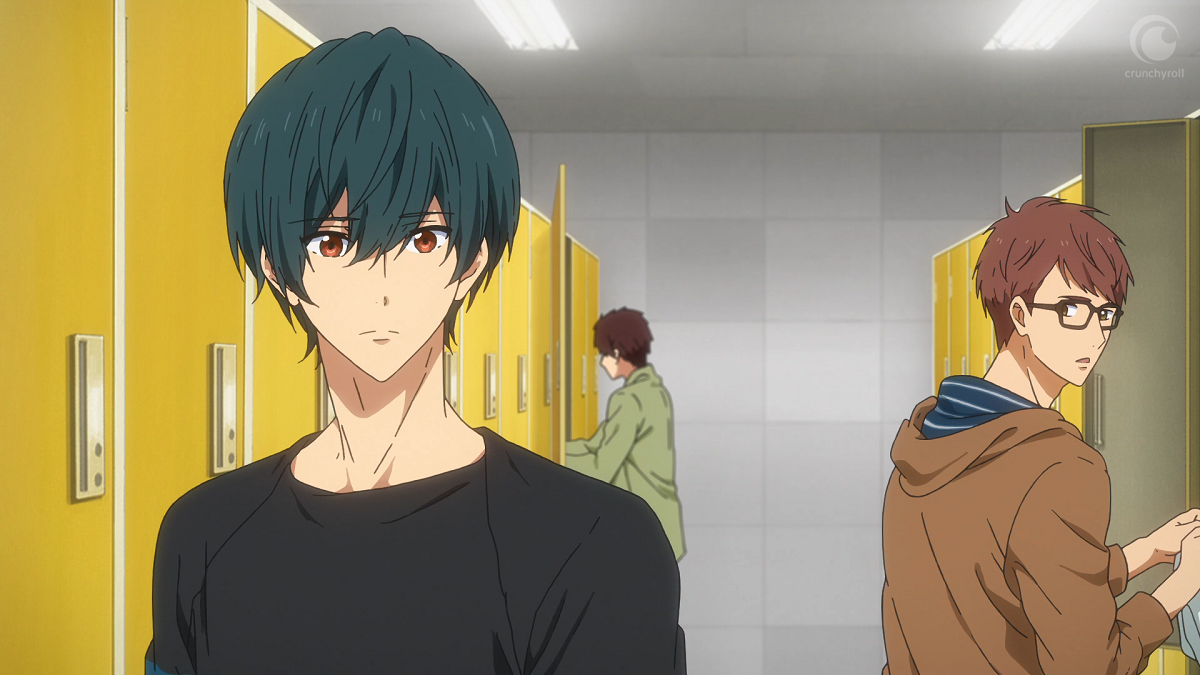 Free! seems to have a thing for childhood friends who reunited later, so of course it turns out that Ikuya and Hiyori met randomly in elementary school and then ended up living in the same town in America. (America is huge, okay? The odds of this happening are astronomical.) The flashbacks in “Mermaid of the Abyss!” show that Hiyori was always a lonely child, and Ikuya seems to be his only friend. This sort of explains his bizarre overprotectiveness when it comes to Ikuya, but it doesn’t excuse it. I understand that he’s worried about Ikuya and he doesn’t know how to help him. But he comes across as extremely controlling, and it’s unhealthy. Surely he must know that the best way for Ikuya to get over his slump is to confront Haru, not avoid him. The thing is that he only knows the bare bones of the 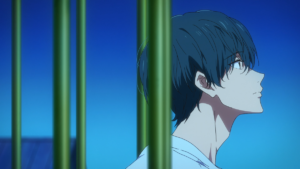 problem, so he doesn’t know how to fix it. It’s up to Ikuya to fix it himself.

That said, depression is hell, and while it may not be their intention, it seems to be something that Ikuya is dealing with. Based on his behavior, there may be no easy “fix”, but this is an anime, so that’s not how it’s going to end up.

This show has always been heavy on the fan service. I mean, everything about Haru and Makoto’s relationship, everything about Haru and Rin’s relationship… This is a show that teases without actually going anywhere. But “Mermaid of the Abyss!” was the first episode in a long time where I thought to myself, “Wow. That’s kind of gay.” Aside from Hiyori comparing his and Ikuya’s relationship to that of the mermaid and the prince in Ikuya’s favorite book The Little Mermaid, there’s the scene at the playground at the end of the episode where Hiyori is hovering over him on the slide. It’s a lot.

As a break from all the Ikuya/Hiyori angst, we get a High Speed reunion! Last week, Makoto saw Nao at the swim club he just started coaching at, and today they got to talk, and Nao got to hang out with 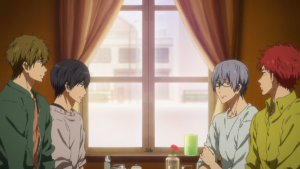 Makoto, Haru, and Asahi. He also, in true Nao fashion, gave them advice about Ikuya and mentioned calling Natsuya, which is something I hope we get to see. As tired as I am about the extreme focus on the boys’ relationship with Ikuya, I am enjoying scenes like this, where everyone comes together, and I’m glad that the boys have someone they can go to for advice.

Episode 6, as I mentioned last week, is normally a MakoHaru episode, so I did like the little scene they had with Misaki, where Haru was talking about the mysterious food blogger who apparently is a renowned swimmer and swim coach. I am very excited about the prospect of Haru swimming something other than freestyle, and I can’t help but think that they’re gearing up towards him competing in the individual medley so that he can give Ikuya the race he promised.

Judging by how much is going on this season, and the fact that we’re almost halfway through it already and Ikuya has barely interacted with the rest of the Iwatobi boys, I’m tentatively hopeful that this means we’ll get a season 4. They are setting up so much that we just won’t have time to cover in just one season, and we still haven’t even met some of the characters in the OP.

Have you all seen “Mermaid of the Abyss!”? What did you think?