‘Behind Closed Doors’ by B.A. Paris is a Dark Story about a Perfect Couple 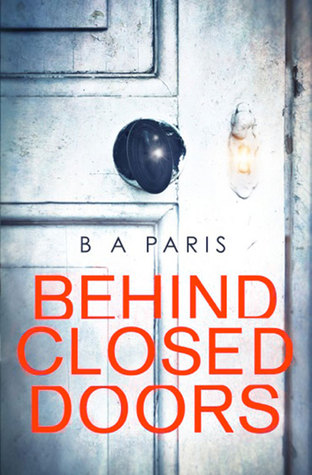 I like reading stories that have a lot of mystery, thrills, or suspense in them and that’s exactly what Behind Closed Doors by B.A. Paris gave me.

This review contains minor spoilers about Behind Closed Doors. So be warned!

Now, before I begin my review I would like to say that I had heard some people comparing Behind Closed Doors to Gone Girl and The Girl on the Train due to its description:

“Everyone knows a couple like Jack and Grace. He has looks and wealth, she has charm and elegance. You might not want to like them, but you do. Though, you’d like to get to know Grace better. But it’s difficult, because you realize Jack and Grace are never apart. Some might call this true love. Others might ask why Grace never answers the phone. Or how she can never meet for coffee, even though she doesn’t work. How she can cook such elaborate meals but remain so slim. And why there are bars on one of the bedroom windows. Sometimes, the perfect marriage is the perfect lie.”

However, I found Behind Closed Doors to be quite different from those two stories and in a good way. There isn’t a lot of guess work involved in B.A. Paris’ debut novel. Just a few pages in, the true antagonist of the story is revealed and you get to know what is actually wrong with Jack and Grace’s marriage. I mean, the description itself was a big hint that those two are hiding something dark.

The story is told from Grace’s POV. The timeline jumps from the past and the present. The interesting thing for me was that the events of the past were just a year old from the present. But the author used that in an intriguing manner to keep making me turn to the next page to see what would happen next. During the story we are introduced to Grace and her sister Millie who has Down Syndrome. We see the day Grace and Jack met each other and how they got married, and so on.

The scenes where Grace acts like the perfect housewife in front of other people are amazing. You wait for her to crack; to let slip something that would shatter the entire image of her perfect marriage.

Like I said, there isn’t a lot of guess work involved. You get to know about all of the players and where the story is going to go. Rather than being an investigator, the story made me feel like a viewer; someone who knew where the characters were headed but unable to do anything about it except wait for the inevitable crash to occur.

Grace, as a POV character, was quite interesting. She is a complex female who has a lot of layers to her. One minute she would have me feeling sorry for her, but then she would do something that would make me want to yell at her. Regardless of the numerous emotions I felt for Grace I never stopped rooting for her. Grace and Millie also share a very close sisterly bond and I found that to be quite enjoyable. Those two are always looking out for each other and that’s a good thing considering the plot.

Behind Closed Doors is B.A. Paris’ debut novel, and that has me looking forward to seeing what she has in store for her readers next. If you’re into stories about marriages that hide dark secrets and a female character who will never give up, then do give this book a read.

Have you read Behind Closed Doors yet? What did you think of it? Let us know.

Note: I received a free review copy of Behind Closed Doors by Wunderkind PR.