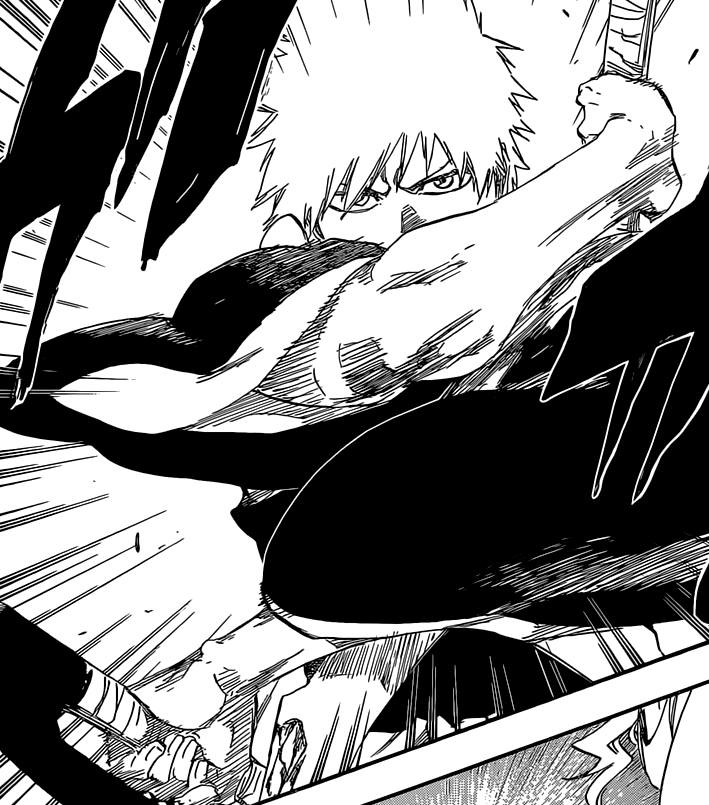 Okay, I’m getting a bit tired of all the battles now. Where’s the story? What is even happening? I hope Tite Kubo gets back to the plot soon. Ichigo came to Kenpachi’s rescue and fighting the female Sternritters was too easy for him, which was to be expected because he’s the main character.

Nothing much happened in this week’s manga issue. It just showed Ichigo fighting the female antagonists and how they threw all their power at him. The thing I noticed was how fast Ichigo had become. He easily dodged the attacks and countered them with ease as well. The females mentioned a list by the name Special War Powers and Ichigo was at the top of it. I really want to know who else are on the list. There was a panel showing Sternritter L getting angry because Ichigo messed up her hair when he threw her into a building. Maybe it was put in for comedic effect but I’m done with writers mentioning that women always want to look pretty, even in battle. Sternritter L shot Ichigo with her Holy Arrow packing five giga joules of energy. But the attack didn’t even faze Ichigo. All the females took out their Holy bows and Ichigo took out his sword. The fight wasn’t shown but you know it’s over whenever ichigo takes out his sword. The female Sternritters don’t stand a chance against him.

The final panels showed the main antagonist Yhwach noticing Ichigo and informing Haschwalth and Uryau that they will begin. Begin what? I don’t have clear idea about what they are going to do. I know Ichigo is half Quincy. So, maybe they will try and recruit him to their cause because they are Quincy’s too? Looking at the battlefield right now, there aren’t a lot of good guys capable of going against the number of Sternritters present. A lot of characters from the good team still have to make an appearance and that’s why I think Ichigo won’t fare too well against his next opponent. I also have a feeling that Aizen, the main villain from the previous arcs will be coming back as well.

What did you think of this week’s manga issue of Bleach? Are you tired of all the fighting yet? Please share in the comments section below.

Previous:Naruto x 678 Review: My Will