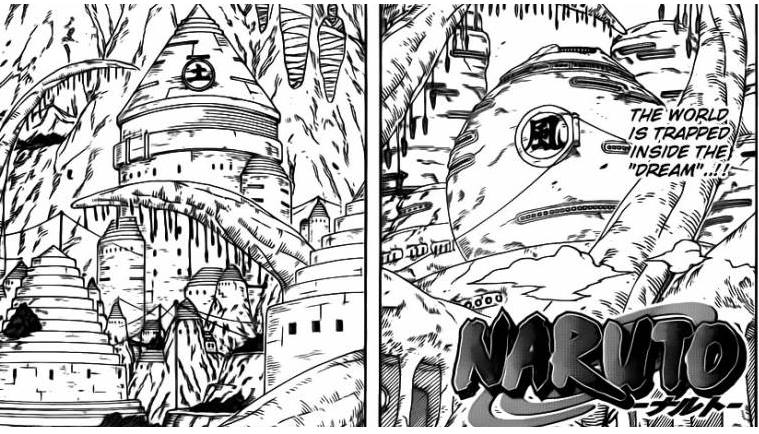 This week’s manga chapter gave us a glimpse into the minds of various characters, hinted at Sasuke’s true motives, and a twist at the end made the whole thing worthwhile.

The whole world was shown trapped in Madara’s genjutsu. I have to admit, people being attached to the roots of a tree, while their life force was drained away, looked scary. I can’t help but think Kishimoto used up a lot of panels in order to show what various characters were dreaming about. I mean, it’s not as if we haven’t read about their ambitions before. What I couldn’t help but notice was how all the female ninja’s wanted to find men in their lives. Hinata was shown sitting with Naruto, her head resting on his shoulder while Neji and her little sister looked on. Ino was happy with Sasuke and Sai fighting for her attention. Tsunade was married to Dan, her little brother, along with all her teammates still alive. Mei was married as well. The male characters were shown dreaming about women too, but not all of them. Kiba was shown as the Hokage. Shino found a new species of bugs. Choji found a girl who liked that he ate a lot. Shikamaru was standing with Temari and didn’t want to get married. However, I was happy to see Asuma with his wife and child. Lee was dreaming about defeating Naruto and Neji, with Sakura proclaiming her love for him. TenTen was shown dreaming about her team in which she wasn’t annoyed by Lee or Might Guy. Gaara’s dream had the most impact for me. He dreamt about a happy childhood with his family and a little Naruto showing up to play with him. Having known his character since Part I, it’s impressive how he has grown as a character through Naruto’s friendship. Having seen all the dreams, I was glad that Kishimoto didn’t play the love interest card with Kiba, Shino and TenTen. People need to have an ambition other than finding a love interest in their lives. I noticed that Bee’s dream wasn’t shown. Maybe he wasn’t affected because of his sunglasses? 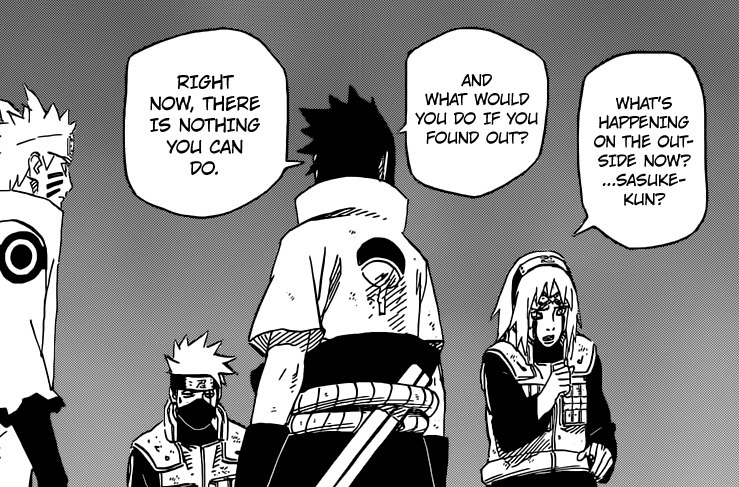 Coming back to Team 7, Sakura asked Sasuke about what was happening outside and his response took me by surprise. It’s one thing to read about fans hating her character, but Sasuke bluntly saying that she was useless and shouldn’t have asked the question because she couldn’t do anything was just wrong. Sasuke even said Kakashi was useless in the war too. I think the whole thing just showed how Sasuke still looked at people as tools to be used. He knew only Naruto could be of any help and that’s why he was acknowledging him. However, Naruto stood up for Sakura and Kakashi and said that even Sasuke couldn’t come up with a strategy better than Sakura, Kakashi or even himself. I hope Kishimoto does something with Sakura and Kakashi now or else Naruto standing up for them would be useless.

The chapter explained more about the Infinite Tsukuyomi. People fell under the genjutsu because of the light being reflected by the moon. However, it began to gradually weaken. I guess you could consider it like an explosion. It enveloped the whole world at the start and now started to diminish. Sasuke also mentioned that only his rinnegan could cancel the jutsu. The Black Zetsu was waiting for Team 7 to arrive and decided to kill them all. Before he could attack Madara appeared, along with his four shadows, ready to take out Team 7. Yes, Madara’s a villain but he’s a philosophical kind of a villain. He went on a speech about how he gave everyone their happiness in their dreams and how Naruto was going to take that away from them. That’s when the twist occurred. Black Zetsu put his arm through Madara’s heart and I was like, what just happened? That’s the first time I’ve ever seen Madara look scared. Black Zetsu looked villainous, he mentioned Kaguya, and hit Madara with a very painful looking jutsu.

I was not expecting Black Zetsu’s betrayal. I knew Kaguya, mother of the Sage of Six Paths, would be making an appearance, but I thought she would be taking over Madara’s body. Team 7 just doesn’t seem to get a break. It would be amazing if Kaguya’s the final villain. With years of seeing female ninja’s doing nothing, it would be awesome to see a female antagonist that can destroy whole planets. Kaguya also had a Bayakugan, the same eyes as Hinata. If she wants to be resurrected I think she’ll make use of Hinata’s body. That would give Naruo-Hina fans some drama. With Kaguya entering the battlefield, Sakura might just get a bigger role, because she too is a female ninja. I remember the Sage of Six Paths and his brother fighting their mother using the Sage’s tools. I think history is going to repeat itself and Naruto and Sasuke will have to make use of those tools again.

What did you think of this week’s chapter? What is Sasuke’s motive? Please share in the comments section below.

Previous:Countdown to ConCarolinas
Next: Bleach x 582 Review: The Headless Star