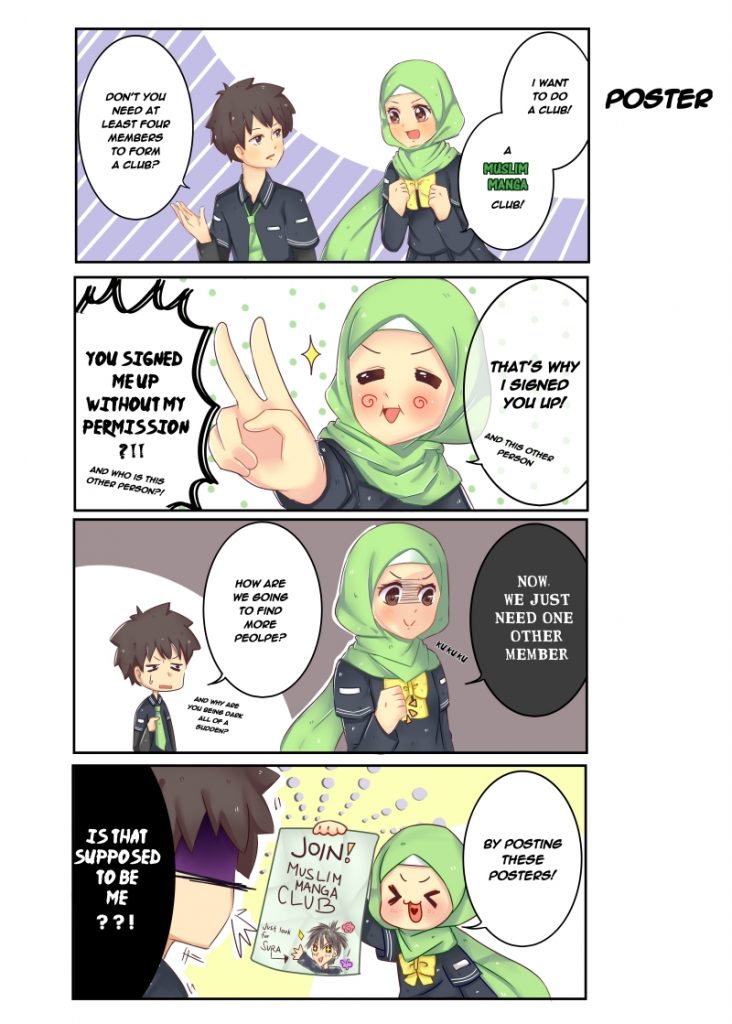 The anime and manga community Muslim Manga, founded by Smiley, began as an idea in 2006. Over the almost two decades since, Muslim Manga had evolved from an online forum community to a website that provides indie manga, art tutorials and contests, and other content. It is a place where Muslims interested in anime and manga interact, and where they aim to dispel harmful stereotypes and sentiments about Islam.

I first discovered Muslim Manga after stumbling onto their webcomic Muslim Manga Club on WebToon. The charming characters and episodic storylines got me breezing through it. I love Aya’s character, who is Muslim, and the energy and joy she brings to her friends. She establishes the Muslim Manga club at her high school, and misadventures and endearing moments follow. The comic includes references to popular anime and manga like Bleach.

Their other webcomics available on their official site and WebToon are Journey of a Muslim and Muslim Siblings Aya and Sura (WaSalam). The latter, a companion to Muslim Manga Club, shows more of Aya and her brother Sura. Journey of a Muslim shows more of the lives of Muslims and confronts misconceptions about Islam. Like with Muslim Manga Club, I breezed through these two comics. Not only are they fun to read, but they also teach non-Muslims how to support their Muslim peers and help prevent ignorance and Islamophobia. Most of my father’s family identify as cultural Muslims, so I commend what Muslim Manga is doing.

You can read more of their manga for free on their official site. Their collection spans different genres from comedy to romance. And as with their webcomics on WebToon, their site’s collection also features stories with Muslim characters. Muslim Manga provides a wonderful opportunity to engage creators and raise awareness about Islamaphobia. Please take the time to check them out and consider supporting them in any way you can.