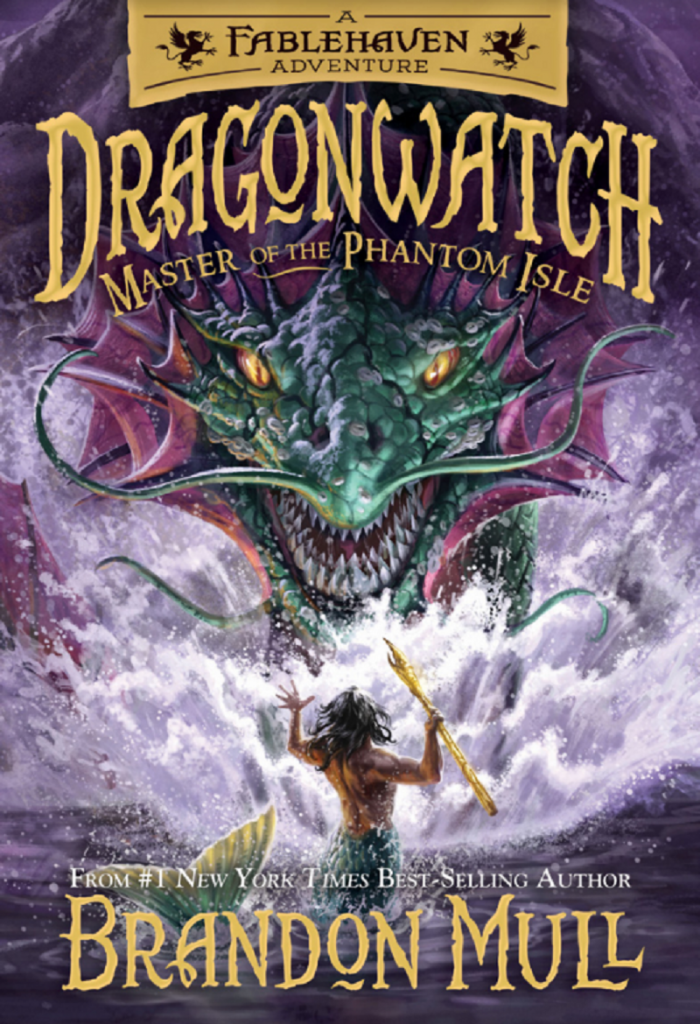 Author Brandon Mull is back with another story set in the world of Fablehaven. In Dragonwatch Book 3: Master of the Phantom Isle we get more new locations, new creatures, a gripping story, and some interesting character developments.

I was provided a free ARC of Dragonwatch Book 3: Master of the Phantom Isle. The opinions I’ve shared are my own.

For those interested, they can read my review of Dragonwatch Book 2. I liked reading it. I was very impressed by Mull’s world-building skills.

As for Dragonwatch Book 3, here’s a description from the publisher:

From the world of Fablehaven, Brandon Mull’s Dragonwatch 3: Master of the Phantom Isle brings readers where they’ve never been before; the Phantom Isle and the gates of the Underworld. After the Key of Forgetting stripped him of his memories and with the Dark Unicorn, Ronodin influencing him, Seth finds himself unsure of who to trust. In the Phantom Isle, Bracken and Kendra struggle to convince Seth of the truth of his past and keep him from helping the wrong side of the dragon revolt.

Tensions run high in the thrilling third installment of the Dragonwatch series. Amidst his world of dragons, aquatic creatures, and dark magic, Brandon Mull paints a harrowing story of urgency, narratives skewed, and the strength of trust and loyalty.

I’m going to try and review this book without giving spoilers because there’s a lot that happens. You can’t really be sure about the agendas certain characters have. Still, if any minor spoilers ended up slipping past me, I’m apologizing for them right now.

Kendra continues to be a great lead character. She has had to deal with a lot from a very young age. In the third book, we see her trying to contain the war while also worrying about her brother Seth. Turns out, Seth’s memories have been wiped clean and he’s in danger of turning to the dark side under the influence of the fallen unicorn Ronodin.

Fans have stuck with Kendra and Seth for more than a decade. It’s always fun, as readers, to see young characters evolve and grow as they survive the circumstances around them. Also, we don’t get a lot of stories focusing on brothers and sisters. That’s why I enjoy reading this series. You might end up shipping Seth and Kendra with other characters, but the major relationship in Mull’s narrative is the strong sibling bond the two share. Here’s to hoping more fantasy stories about siblings are told. Not every middle-grade or YA book has to have romantic love and angsty tropes.

With the story being about Kendra and Seth, I do think some of the side characters end up disappearing in everything that’s happening. It can be tough to handle a huge cast and the Dragonwatch cast is indeed huge. We do skip to other characters in certain chapters, but doing so only made me hope the narrative would go back to chapters featuring more scenes with Kendra and Seth.

This is a very long book. The ebook I read was around 500 pages. And being the third book in a five-part series, I can understand why some might feel that being the middle book is what led to the pace slowing down a bit. Everything in Master of the Phantom Isle seems to be moving toward a setup for an epic battle in the final book. However, that’s not to say there aren’t enjoyable moments in Dragonwatch Book 3. Seth’s journey in the Underworld is chilling. There’s danger everywhere. I liked seeing him try and understand who he is as a person. I also liked how Mull handled a character suffering from amnesia.

The only gripe I have deals with the portrayal of native islanders. We get to visit a new sanctuary called Crescent Lagoon and the inhabitants are supposed to be Polynesian and they worship a volcano (from what I could understand). I mean, I get what Mull was doing with the natives, but it still kind of felt weird to me. I just think it could’ve been handled better. Also, whenever the term ‘exotic’ is used to describe anything (even if it’s fictional), I shake my head.

If you’re a fan of the Dragonwatch series, I think you’ll enjoy reading Dragonwatch Book 3: Master of the Phantom Isle, too. It’s available nationwide.

The pacing might be slow for some, but it still serves as an interesting fantasy read. I look forward to seeing what happens next.