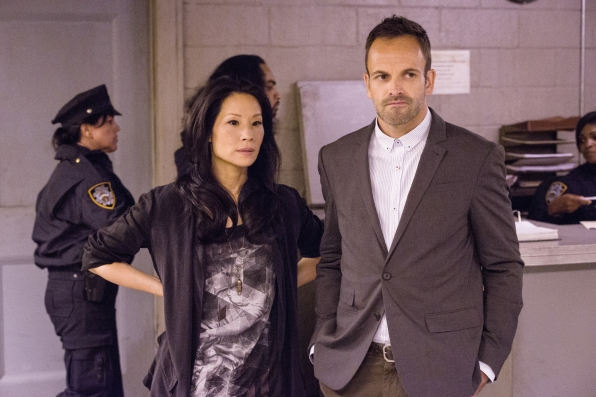 The overarching theme of the episode was partnership, which led to many beautiful moments highlighting the importance of Joan and Sherlock in each others lives. Their friendship is truly something special – an episode never goes by without driving that point home. This week’s episode was especially poignant as it compared and contrasted it to the relationships around them. We got a glimpse into Captain Gregson’s home life, including the breakdown of his marriage partnership, and we got to see the partnerships of the bad guys as they used relationships from the past to pull off their crimes. Almost everything about this episode was pitch perfect, but one line just threw a wrench in things and tainted my enjoyment. Judging by the upset messages in my inbox and a quick look at the Tumblr tags, I wasn’t the only one thrown off by it.

When Sherlock refers to the suspect’s dog as a “feminazi hound” I had to pause my recording, rewind, and watch it again just to be sure I’d heard it correctly. I was surprised that a show that is usually so spot on about representation issues made such a huge misstep. The term “feminazi” was popularized by conservative talk-radio host Rush Limbaugh as a way to degrade “extreme” feminists. It’s offensive not only to feminists, but to anyone who finds the casual usage of term “nazi” insulting as well. It was meant to be a joke, obviously, but there were so many other words they could have used that didn’t come from one of the worst conservative pundits in existence. I’d have actually found the term “misandrist hound” quite funny, or maybe even just the term “man-hating hound.” That’d have worked too. But sadly they had to go with “feminazi,” once more cementing this horrible term into our everyday vernacular. I was very disappointed. 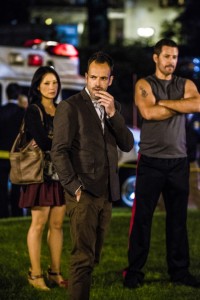 The rest of the episode was pretty incredible, though. The scene at the end where Sherlock describes his appreciation of partnerships despite his pessimism towards marriages, I was thrilled. He didn’t have to refer to Joan by name, but it was obvious that she’s the one who inspired those feelings. Their friendship continues to amaze me. It’s my favorite friendship on TV at the moment (though Abbie Mills and Ichabod Crane from Sleepy Hollow are hot on their heels in this category). What happened between Sherlock and Irene could have destroyed his trust in anybody, but he’s let Joan in. He trusts her. He depends on her. She is his partner, his protege, and his friend.

The importance of their partnership is cemented in the final scene when Joan begins to look at Sherlock’s cold cases. They could have been something deeply personal to him, possibly even a source of shame that he couldn’t solve them. He could have not wanted to share them out of doubt that she could solve them or learn anything from them. Instead, however, he gave them to her. He has faith in her abilities and is willing to share something sensitive and personal to him for the benefit of her improving detective skills. It’s a small gesture in the grand scheme of things, but it speaks volumes about the importance of their partnership.