“Fairytale” Movie Review: The Italian LGBTQ Comedy-Drama About Being True to Yourself 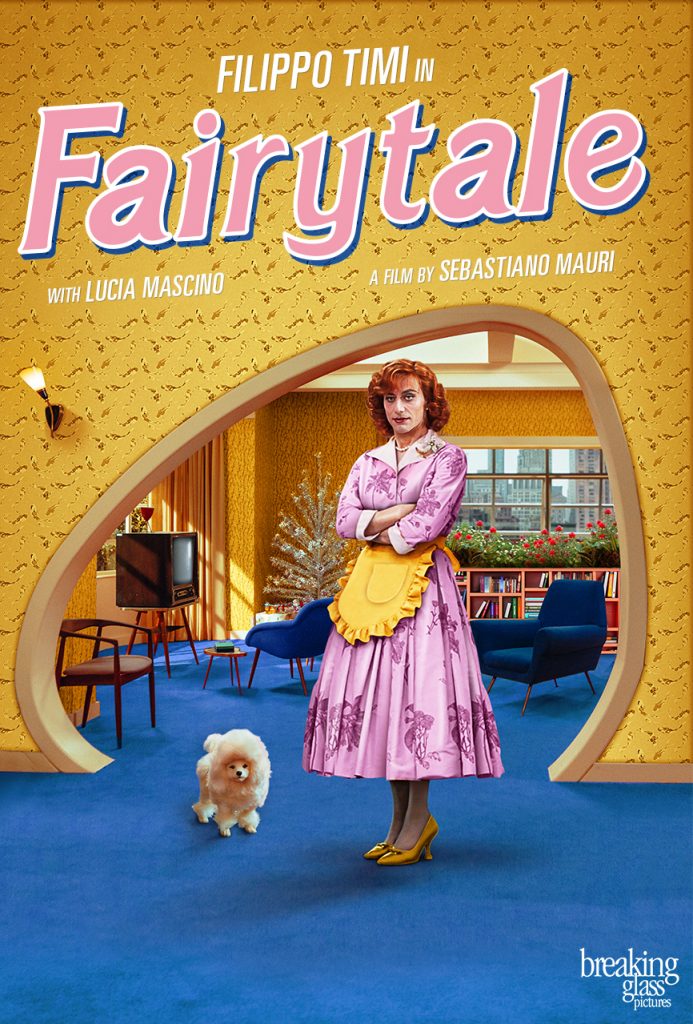 Breaking Glass Pictures will be releasing the award-winning Italian queer comedy Fairytale (Favola) on DVD/VOD today. It’s definitely a comedic trip (in every sense of the word) that tells the story of an unhappy housewife in 1950s America.

I was provided a free screener of Fairytale for review from Breaking Glass Pictures. The opinions I have shared are my own.

A few minutes into watching Fairytale, it’s clear that this film is a cinematic adaptation of the theatrical production by Sebastino Mauri. Now, we know content meant for the stage doesn’t always translate well to the big screen, but I think Fairytale was able to pull it off. The stage play was critically acclaimed and the current film was recognized by a handful of awards, too.

United States, the 50s. Amongst stuffed poodles, whiskey-infused teas, sinful mambo lessons, and threats of alien invasion, Mrs. Fairytale spends her days locked in her dream home and without a moment to breathe. A surreal world where anyone can finally be who they want to be, but behind which hides another upsetting reality.

It’s obvious that the 1950s America in which Mrs. Fairytale (Filippo Timi; he’s married to Mauri) is living in isn’t actually real. There’s a lot going on with her and the existence of the world we get to see is definitely a coping mechanism. Her black and white TV displaying images of doctors talking about the brain lets the audience know there’s more beneath the surface. So, be ready!

In my opinion, Timi did an amazing job in the lead role. It’s not supposed to be a drag performance and I think achieving that with a man dressed up as a woman onscreen can be challenging. So, kudos to the actor for how he handled the role.

The rest of the cast includes Fairytale’s best friend Emerald (Lucia Mascino). The two meet daily at Fairytale’s house to talk about their relationships. While Emerald isn’t happy about how Fairytale is being treated by her husband, Emerald’s own husband has been drifting away from her.

Both women long for something more and as the narrative progresses they fall in love with each other. From there the two make a plan to be free from the problematic men in their lives. Considering they’re in the 1950s, the two women do have to operate under certain limitations.

I liked the conversation Fairytale has with her mother. The scene talks about the privilege men continue to have in society and how women need them for security as well as to be considered respectable by others.

I really don’t want to give away major spoilers, but, Fairytale is a movie about being true to oneself. It tells the story of a highly vulnerable part of the queer community. Now, did the narrative have certain issues? In my opinion, yes, it did. However, I think the end result had enough positives to lessen the severity of the issues.

The production design is impressive. There’s only one major set in play throughout (almost the entire) film. Mrs. Fairytale’s house is full of color and features an over-the-top aesthetic. I enjoyed how every window in the house looked out to different parts of America. One window showed the city while the other displayed the Grand Canyon. The costumes are fun, too.

Being a comedy movie, I was glad I was able to laugh at the weird moments that played out onscreen. The interactions between Fairytale and Emerald were always hilarious to me. A narrative that doesn’t make you at least chuckle is the worst thing that can happen to a comedy film. Fairytale isn’t impacted by such a curse even though the premise is really out there.

If you’re looking for a queer film that has fun with the story it wants to share while delivering a narrative about wanting the freedom to be who you are, you should consider checking out Fairytale.

Let us know if you have already watched it!

Previous:Be In YOUR Room When It Happens: Hamilton Drops On Disney+ July 3rd
Next: Queer Dark Comedy “Waking Up Dead” to Begin Filming Early July