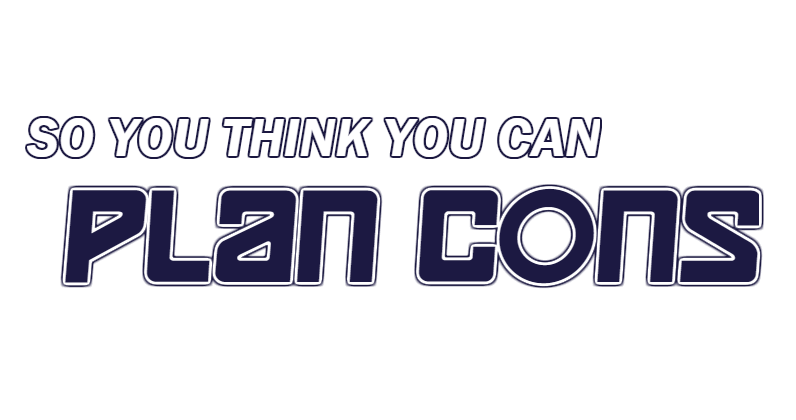 The Geekiary is lucky to have two successful fan convention organizers on staff. We sat down and asked them some basic questions about starting a con, and what you should look for before you decide to support a new one.

A crowdfunded fan convention can be an amazing event that brings fans together over shared interests… or it can be a disastrous flop. Tara and K-K of Saga Event Planning have the unique position of having started two successful single-fandom cons, one that launched without crowdfunding (Ice & Fire Con) and one that was funded through Kickstarter in 2016 (Beach City Con).

How did you come up with the idea of Ice & Fire Con/Beach City Con?

Tara: Ice & Fire Con was originally “A Convention of Ice and Fire”, founded by myself and two friends because at the time – 2012 – there was very little programming for ASOIAF/GoT at multi-genre conventions. Throughout the years the attendees became family, so when K-K pulled me into the Steven Universe fandom, I couldn’t resist the idea of starting a Steven Universe-exclusive convention.

K-K: Tara and I discussed the possibility of a Steven Universe fan convention for several months before we decided to officially take the plunge at Ice & Fire Con 2016. IaFCon is so special, and I knew I wanted to give the SU fandom a similar space to celebrate the show that we all love.

K-K: Demographics is the difference that affects the conventions the most. IaFCon is 18+, and has gained a reputation as a “summer camp for adults.” Lots of partying and a healthy amount of raunchiness, on top of all the good-good ASOIAF fandom stuff. As an all-ages event based on a children’s TV show, the programming at Beach City Con is a bit lighter, more interactive, more musical. Plus, with enough ticket sales, Beach City Con can afford one or two of the voice actors’ fees and expenses. HBO actors– many of whom require airfare from the UK!– are a very different story. On the flipside, since A Song of Ice and Fire has been around since 1996, there are a lot of awesome established names in fandom – podcasts like Radio Westeros, Davos’ Fingers, and History of Westeros. We are lucky enough to have a lot of them on board for the con.

What were the first things you focused on when organizing the events?

Tara: What we needed to pay out to make sure they happened. For me, with almost a decade’s worth of experience in finance/accounting, that is the absolute, most important part. Sure, having good panels and activities is important, too – because those are what lead to people feeling they got their money’s worth – but if you can’t pay for your venue or meet your hotel attrition rate, you’re in trouble.

K-K: Naming the event might seem simple, but make sure you can obtain a domain, email, and social media usernames that are, if not the same, similar enough to be a recognizable brand. There are some things to consider that might not immediately occur to you, like the fact that “con” is a very common Spanish word, so get on Twitter and do your research!

After the budget and name, obtaining a venue is #1. Prepare for many dozens of hours of work on that; writing a “Request for Proposal,” poring over prices and availability and food & bev minimums and places to stay and… it’s a lot of work. And after all that, you have to pay a deposit, out of pocket, and be prepared to lose that money if your con can’t get off the ground for year one.

Tara: Now, all that said, many years ago I wrote an article called “How to Organize a Con in 5 Easy Steps!” It’s very tongue-in-cheek, but it does have some good suggestions, so I definitely suggest giving it a read.

What advice would you give to anyone looking to start their own convention?

Tara: KNOW YOUR BUDGET. I can’t stress how important this is. What do you need for facility rentals, taxes on those rentals, and what do you need to cover your minimum hotel attrition rate? Also, if you’re pulling in more than $5,000 in a calendar year, what do you need to set aside for the IRS? Then there are A/V costs and all of the little things you don’t think of – badges, for instance. You NEED someone who knows how to budget. Guests should be the LAST thing you think of, and even then, you should overcompensate in your budget – plan for the appearance fee/guarantee, the most expensive plane ticket you’d be required to provide, etc.

K-K: Know your scope! It’s so much better to sell out year one and adjust your size accordingly, than it is to not sell enough tickets to cover your minimum costs. A first year fan convention can expect, at most, a few thousand attendees– and that is on the high side. And know that folks drag their feet when it comes to buying tickets. Selling 20% of your passes in the last month can hurt your bottom line, if you need those sales for your larger costs.

On a related note: if you can afford a weekend pass to a convention, even if you don’t know that you can make the con itself yet: please buy that ticket. It is incredibly helpful for organizers for so many reasons. This goes double for smaller, newer, fan-run events.

What do you think are important signs of a con’s legitimacy that people should look for before crowdfunding an event?

Tara: Do these people have any history running a successful event, crowdfunded or not? Does anyone on their team have finance/accounting/budgeting experience?

K-K: Check on the scope of the project. How many attendees are they expecting? If it’s over 3000, I’d think really hard about that donation, or at least don’t count on whatever rewards they are promising. Where is the event being held? Convention centers have incredible minimums – we’re talking 20k for one day of their smallest room. Who is involved, and what is being promised? A ton of hotel room packages should be a red flag. For Beach City Con’s Kickstarter, we had three $1000 packages that included two nights at our host hotel and four premium weekend passes. After taxes and fees, we ended up netting something like $20 total on those packages. It feels good to see that goal number jump with the higher tiers, but remember that a lot of that money is not going to the con’s expenses – it’s going to the hotel rooms promised in the package!

Tara: For Ice & Fire Con, we’re hoping for a bigger gaming room, a bigger vendor room, and a bigger main programming room. But we also strive to be bigger and better without losing the family aspect of our convention, because it’s what makes us different. It’s what makes us special.

K-K: Beach City Con is still so new that for year two my primary goal is to smooth out the rough edges of our first year. We have obtained more space at the venue which means we can sell a few hundred more tickets than last year. We had so many good suggestions from attendees and are looking forward to incorporating them! In 2018 look for a gaming room, more vendors, con t-shirts, a backdrop for pictures, and more.

What are you most looking forward to at Ice & Fire Con 2018 in less than a week?

Tara: This is already on track to be our biggest year yet. We have our usual popular activities scheduled, but we also have a lot of new events scheduled. It’s scary and exciting all at the same time. Can our karaoke night be as successful as it was the first year with almost five times the attendees? Will enough of our ticket holders be interested in our new, original musical? I think so, and I can’t wait to hear feedback on these new/returning events. But above all, Ice & Fire Con is a family, and we welcome new members wholeheartedly. So I suppose meeting a bunch of new ASOIAF fans is the most exciting thing of all.

Tara and K-K make up Saga Event Planning, the parent company for Ice & Fire Con and Beach City Con. If you’re interested in starting a fan convention (or other fandom-related event), Saga Event Planning offers consulting. For example, those services were provided to FannibalFest, a con which was successfully funded through Kickstarter and had an awesome year one in November 2017. You can read more about SEP in the blog entry, “Saga Event Planning: Who, What, Where, When, Why”.

Universal FanCon’s failure was incredibly disheartening, but please, we urge you: don’t give up on crowdfunded fan conventions. If the organizers have experience, if the scope is modest, and if they are transparent about their process, they are worth a shot!