‘Inside the Rain’ Shines a Light on a Unique Experience

Inside the Rain is the debut feature film from Aaron Fisher. The movie tells the story of a young man dealing with bipolarism, depression and anxiety. A misunderstanding at his college leads the viewer on a journey through his battles with neurodivergence, control and most of all, love.

Starring a cast that highlights new talent like Ellen Toland as Emma as well as seasoned character actors like Catharine Curtin, Paul Schulze and Rosie Perez, Inside the Rain colors scenes with diverse points of view which bolster how real and grounded the script is.

We follow Ben Glass (Aaron Fisher) as he enters college. He registers with the disabilities office who help him find boarding and accessibility options. He seems to be self-sufficient when managing his medication, but after a night of bad decisions, his actions are mistaken and exacerbated leading to the night being written up as an incident in his permanent record.

Ben insists on a trial to prove his innocence and then spends the film making a movie to portray the true events of the night. Rosie Perez stars as his no-nonsense therapist and Eric Roberts as Monty Pennington, a client of Ben’s father (Paul Schulze) who helps him produce the movie. Ellen Toland stars as Emma, a stripper and sex worker Ben falls in love with after a chivalrous encounter outside of the club where she works.

Rounding out the intimate cast are Ben’s long-suffering and loving mother, Nancy (Catharine Curtin) and the university advocate at the disability office, Mrs. Morgan (Natalie Carter).

Each character shows us a side of Ben that helps tell his story in multifaceted ways. From his vulnerability with his therapist, his tenderness with Emma and his raw emotion with his parents to his defensiveness with the school. As we see him lose control of his circumstances, we see his ability to temper his emotions start to crumble. The premise of the movie is Ben being at odds with the school for giving him a demerit, but as the story unfolds, it’s clear that Ben is really at odds with himself.

I had the pleasure of sitting with Eric Roberts to ask him about how he saw his character and his motivation for taking such an unconventional role.

“I’m just kind of an Eric Roberts, run of the mill, possible sleazebag!” he said joyfully while we talked. “He just adds a bit of color to the scripts, but why I said yes to this movie, wasn’t the character or even the script; it was the subject matter, I think it’s important.” 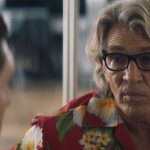 Roberts is no stranger to the vagaries of psychotropic medications.

“I felt very pinned in. I had a job where the host of the show said, ‘What’s wrong with you?’ and he never asked me back… and I’d been on that show a lot. So I understand how to like and dislike [the medication process], and I understand how it’s a lifeline for people. When I read the script, I realized this was an experience that needed to be told. Plus, Rosie Perez! Who doesn’t love her?!”

Roberts went on to explain that when Aaron sent him the script he was first intrigued simply because it was a small role and he could fit it into his extremely busy schedule. Eric Roberts boasts over 750 acting entries on his IMDB (including the 5th installment of his popular Stalked By My Doctor series). I joked that he was the hardest working man in show business and he replied he was the luckiest.

“Every morning I look into my mirror and I thank God for my wife, my daughter, my horse and my career, because those things are my lifeblood.”

After Fisher sent him the script for Inside The Rain, Roberts immediately knew it was valuable.

I speak about it in detail later with Fisher, but I asked Roberts what he thought of the theme of control in the film. There seems to be a juxtaposition present of Ben wanting desperately to be in control and also accepting that he has no control, and a large part of his journey is the reconciliation of those two concepts.

“That’s why this story is so cool. And it’s beautifully told.”

While watching the film, I found myself feeling frustrated at some of Ben’s antics to produce his film inside the movie. In some people that manage their neurodivergence, they can be both inwardly focused and completely self-unaware. It creates an atmosphere where they’re so dedicated to one thing that they can tune out everything else around them.

Sometimes this bargaining can be misunderstood as indifference and the movie does a great job of subtly showing these struggles. There’s a small scene where Ben and Emma are arguing over a discount at a local diner. Emma insists that they order the combo for the savings and Ben thinks it’s pointless and doesn’t matter. What she doesn’t know is he can’t understand that she’s not talking about the discount at all. He’s got a goal in mind and he’s running at it full speed. What he doesn’t understand is that she’s not relating to him in a linear manner. She’s speaking in metaphor and the mix of logic with human emotion can often cause clashing.

Overall this is a story of understanding. I walked in on Fisher while he was finishing up another interview and heard him say that it was very therapeutic to see people enjoying the movie.

“The terrible memories don’t haunt me as much anymore because I laid it out for people to see and they’re congratulating me for it.”

The process took four years. From writing to casting, re-writing and production, Fisher spent a large chunk of time getting Inside The Rain to screen.

“All I had done up to that point was small student films. I knew I had a story tell, but I didn’t know what it was, I just had to tell it. I’d graduated a few years earlier and I felt like I could relate to Ben Braddock in The Graduate.” Fisher confirmed that Ben Glass was inspired by Ben Braddock, but also by himself. 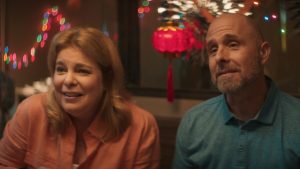 I find that many movies don’t pay a lot of attention to people who are dealing with bipolar, severe anxiety, depression or its pharmaceutical elements unless it’s a magical pixie, fantastical thing. The film itself is very real and grounded and you can tell it’s from someone with the experience to lay it all out.

“I was going to make a movie no matter what. I feel like you have to be a little delusional to make a feature film,” he explains, laughing. “After the first few months, I fell into a deep depression because I felt like my writing was very bad and cliche and it probably was which is part of the writing process. But I was so bad that I couldn’t move or eat so I voluntarily checked myself into a psych ward where three times a week I was doing ECT.”

ECT stands for Electroconvulsive Therapy. “They shock your brain into being less depressed and it’s not fun. In fact, it’s the opposite of fun, it’s terrible, but after is when I got the basic idea of the school hearing and it was kind of a eureka moment.”

While Fisher didn’t have other elements like the love story worked out yet, it did give him a good baseline along with a protagonist (Ben), a goal (prove his innocence during the hearing) and an obstacle (his bipolar, depression and anxiety).

There’s a point in the Inside The Rain where Ben’s journey shifts, but it’s seamless and takes the viewer along for the ride. As he flounders in his efforts to get his film made, the viewer may find that their loyalties have changed, or maybe the goal should be reset and the movie acknowledges that through reactions from the other characters.

You slowly start to see that his enemy is not necessarily the hearing committee, but actually himself.

“The film couldn’t be about revenge. That’s not what you want, it’s not Kill Bill, no one starts running around with swords. It’s a romantic comedy!” Fisher says excitedly while discussing the plot turn. The story becomes less about him proving his innocence and more about the daily struggles he faces as he deals with his illness. His innocence is implied, and he may be the last one to see it.

I mentioned that I enjoyed the cyclical nature of his mania. Because his episodes weren’t linear, it meant it wasn’t something that could be “fixed” or that would go away. That the real journey was understanding how to manage even after sometimes creating scenarios that exacerbate the situation.

“Ben has been living with [bipolar] for years, it’s a part of him.”

“It’s an active process: I have control, I’m giving it up.” I offer. 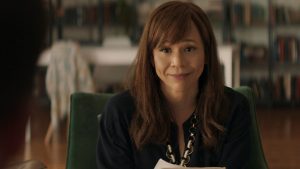 “Exactly, his therapist says, ‘Ben, you’re off your meds, you’re manic’ and he’s like, ‘I know’. He’s 25 and his first episode was when he was 19, he knows the drill somewhat. But people take for granted how hard it is to get through one day. It’s a million times harder for me to get by. If feels so hard just doing simple things. Not being in a routine makes me depressed and I have to force myself to be in a routine.”

That challenge is why this film is so important.

“I’m a het, white guy, what do I have to say?” Fisher jokes. “But I have so many other facets and I think it’s a good story to tell.”

I asked what the overarching message of the film is and what Aaron Fisher wants the audience to know about him from the film. He replied, “I want people to take away what they get from it, I want it to be open to interpretation. But the main metaphor for Inside the Rain -when you’re soaked and in your clothing- is bipolar depression. 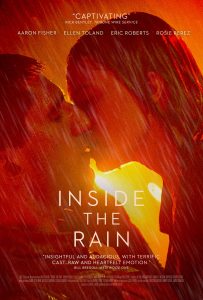 “I’ve been through it enough where I’ve been able to look outside myself and know when I’m getting anxious or manic because I’m bipolar. I’ve had years of therapy and medicine and I’m still learning how to manage.”

Fisher wants to give hope to those who are still struggling that there is life inside the rain.

“I want people to know that I’m a filmmaker and an actor and I would love to act and direct in many projects and have as many people watch as possible because I love making and showing films. It’s the best feeling. I’m passionate about the stories I’m telling and I need to tell these stories, I have so many to tell.”

Have you already seen it? Looking forward to seeing it? Share your thoughts in the comments!

Previous:Choose Your Next Watch With CherryPicks!
Next: “Almost Love” Review: A Queer Rom-Com with Issues But Still Fun to Watch