Choose Your Next Watch With CherryPicks!

CherryPicks is a great new service that curates fresh reviews of today’s hottest releases. Whether sour or sweet, each movie is carefully dissected from a female point of view.

Started by multi-hyphenate creator Miranda Bailey (Norman, Being Frank), CherryPicks gives a peek into the diverse female perspective by aggregating reviews from female-identifying or non-binary critics across the entertainment industry.

Though there’s nothing new about the ways women ingest media, Miranda found it hard to find reviews that really explored entertainment from the female perspective. I had a chance to sit down and talk with Miranda about the site and what motivated her to start it.

“I’d made [I Do.. Until I Don’t] with Lake Bell and she really wanted to gear it towards women. The guys didn’t really get it, but the girls liked it and I wanted to find out what female critics were thinking. As I tried to find what all the women think, I found some women critics, but I found out that 70%+ of the critics on Rotten Tomatoes were men and 80%+ of the top critics were men.”

Miranda went on to say that while there were some industry organizations that focused on women critics, there really wasn’t something available on the consumer side.

“There wasn’t a consumer site where movie lovers and fanatics could go and find the score or rating or even what women thought of the movie. So I thought, well… I’ll just start one!”

CherryPicks gathers reviews of films that run the gamut from festival darlings to Netflix selections. Every review is framed with a woman’s perspective in mind.

“As a filmmaker, I kept hearing ‘we need more women stories and women POV’s’, but when I went to pitch, I kept being told there was no audience.” 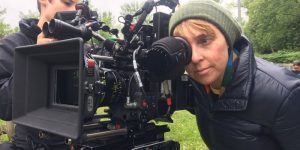 She was told that women-centric stories just don’t sell well overseas unless it’s a genre movie where they’re getting murdered.

“The truth of the matter is that consumers are being told what to buy from the critics. So if the critics are saying this is worth your money and the content is from predominantly Caucasian males, then the producers and movie makers reflect that and follow that lead.”

In the wake of #metoo, #timesup and #blacklivesmatter, we’re starting to see a changing of the guard. A lot of things that were done as part of tradition are being tested and new ways and methodologies are battling more archaic ways of operating.

“If we don’t hear from women critics and critics of color, then we don’t get that perspective and we can’t reach that audience.”

I mentioned that I liked the idea of actively breaking down the barriers that block us from seeing diverse experiences. Several times we’re told even as consumers that there’s no audience for female performance, but then something like Girls Trip happens and not only is there an audience, but that audience is chomping at the bit for content.

Miranda agreed and believes that women are much more in tune to change and going with the flow because women have had to continually reinvent themselves and now the industry is having to do that as well.

I asked her what her wish was for CherryPicks in terms of the impact the site had.  In conjunction with movements like the ones mentioned above, Miranda hopes that more people will be inspired and appreciative of seeing either their own, or different perspectives.

So how does it work?

First you go to their bright and colorful website, TheCherryPicks.com. The site is inviting, content rich, and easily navigable. The CherryPicks themselves are front and center. Each review page contains a summary of the film along with any available streaming or ticket purchase links along with review snippets from top female critics. 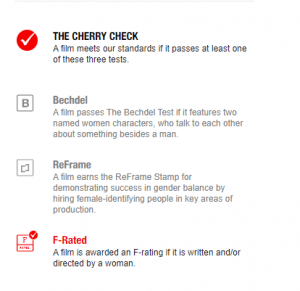 There’s even a handy chart to provide additional female related information, such as whether the film was directed by a woman, or passes the Bechdel test.

It’s important to note that not all of the movies are female-helmed films. Miranda mentioned loving Ford v. Ferrari, they don’t exclude any projects, they simply offer the female perspective on the content.

Ratings are split into four primary categories (these categories can also be used to filter in order to find your next watch!).

Run Don’t Walk: A bright bowl of cherries awaits you. “These are your Moonlight’s. They are the creme de a creme.” Movies in this category score between 81 – 100% in the CherryPicks algorithm which factors in critic’s stars, letter grades and scores.

Definitely Worth the Ticket: Two cherries is a movie that is highly recommended, though you may be able to wait a bit.

Catch it From Your Couch: This is a lone cherry, but it’s not necessarily a bad thing. It’s a movie that’s worth seeing, just again, maybe not as pressing. “If 50% of the audience saw it and liked it, it can’t be that bad. Especially if that 50% were women.” These movies have merit and deserve a chance.

The Pits: “Everyone loves a pit-y movie every now and again. I’ll rewatch Glitter over and over!” The scores for movies classified as “The Pits” are from 0 – 34% and will probably appeal to a niche audience. 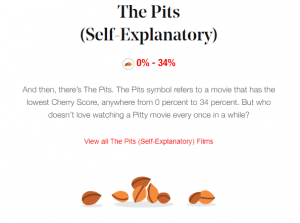 The ratings are cute, but potent and positive. They aide in making the site pleasurable to browse.

CherryPicks not only curates reviews, but also includes engaging and relevant articles designed to showcase female talent and representation. Two great articles to look out for are Women of Actions: Female Movie Characters Who Really Kick Ass, and From Hattie McDaniel to Regina King: the Black Women Who’ve Won Oscars.

They also have CherryPicks’ Picks which consist of listicals directly curated by CherryPicks staff and writers. Check out their quarantined approved Cherry Picks for Cabin Fever, or Miranda’s own list of Top Women-Made movies.

The entire experience is new and very exciting to watch as it comes together. And Miranda has lots more in the works. They’re currently developing an app and they’ll have a podcast debuting this summer.

CherryPicks hires a group of women who are fairly paid and collaborate to bring you fresh and engaging content. They boast critics of different ethnicities and sexual backgrounds, producing a spectrum of female and non-binary experiences to draw from.

You can check out CherryPicks all across social media platforms such as TheCherryPicks on Facebook, Twitter, Instagram and more.  They do lives on Instagram which are very interactive and fun. I highly recommend it when you’re looking for something new to watch!

Previous:The Adventure Zone: Graduation Ep. 11 “You Can Call me Althea”
Next: ‘Inside the Rain’ Shines a Light on a Unique Experience