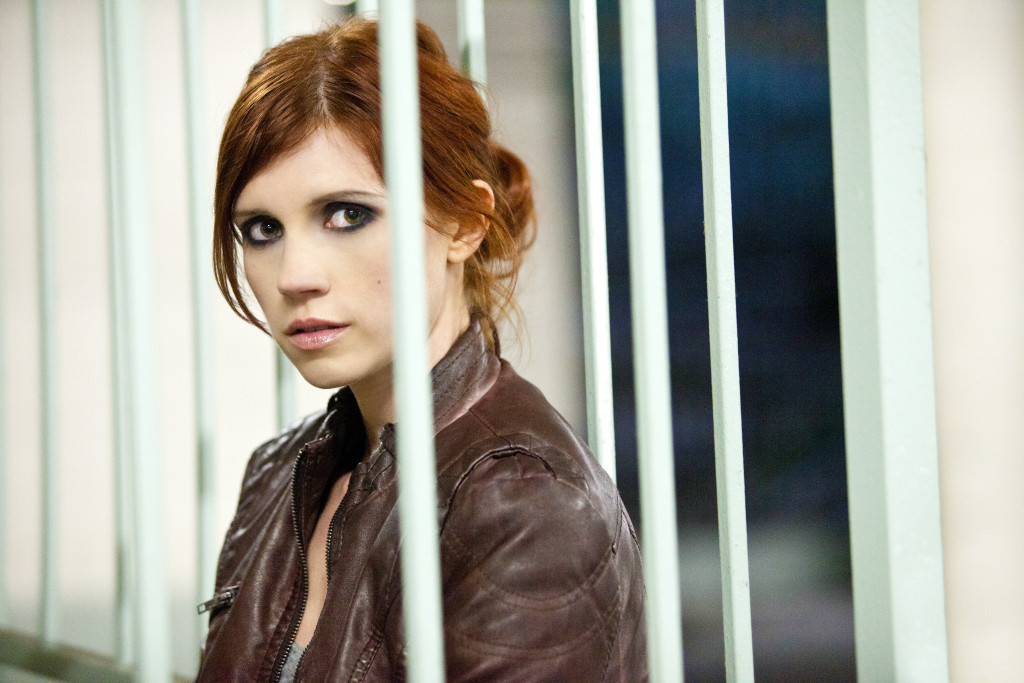 Julie McNiven (Anna, Supernatural) and fellow Supernatural alum Jim Beaver (Bobby) are part of an upcoming project called Internity, which is currently in the crowd funding stages (support the project here).  The fundraising will go towards the pilot episode, which they hope will get picked up by a network.  The creators describe it as “what you’d get if Scrubs met E.R. and they went to Comic-Con together.”  You had me at Comic-Con, guys.  I’m IN!

But the awesome vibes around this project just keep coming.  The Twitter account has been very supportive of the women in the Supernatural fanbase in recent days, and the show focuses on a woman described as “surviving a messy divorce [and returning] to medical school, at 50, to pursue her dream of becoming a doctor.”  Supernatural alum and Comic-Con references and an awesome female protagonist?  How could I not support this project?

I was lucky enough to talk to Julie McNiven about the project, as well as her continued involvement in the Supernatural fandom.

It’s great to speak with you.  Have you been keeping up with Supernatural since you’re last appearance in season 5?

It’s great to speak with you too!  I tune in when I can, but I haven’t caught up in a while so I have no idea what the boys are up to.  If I had a really great time on the show, like I did on Supernatural, I have a hard time watching them after my character exits.  It makes me miss working on the show!  I will catch up eventually, though, because I do love the show.
The last Supernatural convention you went to was Las Vegas 2013,  right?  But you’ve been to quite a few.  What’s your experience been like?

Yes, it’s been a while.  I’ve had great experiences in the con world!  I had no idea the fandom existed when I booked the show. The fans have been the most supportive, incredibly loyal group!  They are really quite amazing.  Everything I’ve done since i entered the Supernatural family has been supported by fans. Professionally and personally.
I’ve heard you support the Ladies of Supernatural convention.  What do you think about the concept of a convention focusing on the awesome women of the show?

I think we could use a shake up of the con structure with a special ladies con.  We could make it a more intimate experience with talks on different ways the show has influenced the fans, etc.  I spoke with SNradio and she had her students write a big paper on the show in her psychology class!  There are so many avenues that could be explored!

One thing I wanted to note is that most of my personal favorite characters have been the redheads.  You, Abbadon, Charlie.  And you all met unfortunate ends.  I almost want to write a fanfiction where all  you amazing redheaded women come back and take over the world.  How fun would that be?

That would be awesome!  There should be a contest as part of the con where fanfics are submitted and the winner is performed by the actors on stage. We could do our best Dean and Sam impersonations when we’re not playing our own characters.  Ummmm….that would be really fun!

Our fandom loves supporting the cast when they do other projects and  both you and another Supernatural alum, Jim Beaver, are part of a new project called Internity.  How did you get involved with that?

I actually became involved because a fan, Tracey Dianne Miller, tweeted that I should be on the show!  I looked it up and saw that Jim was a part of it and just tweeted back that I’d love to….and then like 24 hours later, after reading the script and chatting with Joey Adams, the writer/producer, I was on the show!

Going back to an earlier question, awesome women in the industry, it seems like there’s a lot of of female-driven plot in this project.  The main character is a woman in her 50’s returning to medical school to pursue her dream of becoming a doctor.  What more can you tell me about that plot?

Yes, Marina Sirtis, who you probably remember from Star Trek Next Gen plays our lead.  Her, along with Carla Jimenez, are two powerhouse women who will drive the storylines beautifully.  I’m playing a character named Sara Cohen who is also quite a force….in a different way.  She is probably always the smartest person in every room and has big dreams of entering the Peace Corps and saving the world.  For now, she’s an intern at Portland Memorial, trying to figure out who she is and how she fits in.  She has a big heart and is really eager to be helpful, which often just causes more of a problem.

The show is a dramedy with elements of fantasy mixed in. What? Yes, that’s right.  Dr Nate works out his day to day problems by daydreaming himself onto his favorite TV shows, which happen to also be a lot of our favorite sci-fi shows!  This will give the show the opportunity to have really awesome guest stars that the sci-fi fandom will love!  With the fantasy aspect, we give the show the opportunity to do anything, go anywhere.  But we will also deal with heavy social issues.  The set up pretty much lets us have it all!

This definitely seems like something the Supernatural family would be interested in.  One of the characters is described as a “Comic-Con fanboy.”  I’m a Comic-Con fangirl myself.  His “dream sequences” seem like a great opportunity for connecting with fandoms.  What can you tell me about the fandom connections in the project?  Side note: have you ever been to San Diego Comic-Con yourself? Would you want to go?
I haven’t been to SDCC but I’d love to go!  I’m sure one day, hopefully soon, I’ll be there with a show.
So our slogan here at the Geekiary is “We’re Fans.  We have a lot of Feelings.  This is where we talk about them.”  So I have to ask, what  gives YOU feelings?
SO Much!  Haha!  Music, words, looks, you name it!  A video of an animal touching grass for the first time after being kept in a cage in an animal testing lab…cue sobs!  A video of a little boy getting a hearing implant and hearing his parents for the first time…sobs!  Clearly Facebook exists to make me cry.

Thanks for talking with me, Julie!  I wish the project all the best.

Previous:Naruto Shippuden 19×435 Review: Jiraiya’s Ninja Scrolls “The Tale of Naruto The Hero – Order of Priorities”
Next: The Walking Dead 6×3 Review: Thank You