This week’s episode of Lost Girl opens with Bo looking into a mirror, covered in blood spatter, and echoes of her friends’ pleading voices. What did Bo do?!  Where are her friends?

After three seasons of WTF moments, Lost Girl attempted to provide us some answers this episode;  mostly in blue tinted flashbacks and flashbacks within flashbacks (FLASHBACK-CEPTION!).  Mind you, I didn’t say it actually answered our questions or made us look at Bo in a different way, but it tried. 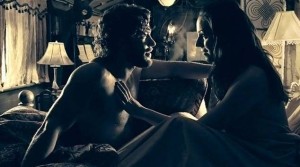 What it did do was show us Rainer/The Wanderer in a whole new light. He has been touted as the big bad for basically all of last season and most of this season, yet he’s just an emo guy that apparently falls in love too quickly? It turns out to be was a fae anarchist who’d been written out of history and cursed to ride the Death Train forever.  He was not necessarily a bad guy.  In fact he even pushed Bo to leave the train and get to safety, but as usual she makes the crazy decision to stay. Despite questionable motives, and even more questionable chemistry between the two, she chooses him. But if she’s planning to “live the life I choose” how is she muttering words about destiny.  That defies all the logic!  I’m not even sure what chemistry there is between them.  Bo can’t make a decision to save her life.  I would say she is regressing to a season one Bo, but that Bo actually made some decisions, saved some lives, and defeated some bad guys. In this world our lead character is not the one who saves the day.  It’s her friends and her family doing it.  Yes, other shows have touched on the need for family to defeat the evils in the world. Those shows let us see that it takes a village, if you will.  Their lead character needs their Scooby gang for backup, but on this show it’s become the Scoobies that do the defeating while their lead stands around looking lost.

So was the whole Wanderer thing a misdirect or is Rainer somehow going to turn bad?  I wish this show could actually make its bads last a whole season arc.  Or just make them really, actually, evil.  How am I supposed to really hate Rainer when he was standing up the dictatorship of Trick?  Let’s face it, this one man is what is uniting an entire fandom in hatred.  We have asked for answers.  We have asked for a decision.  What do we get?  Rainer. Bo has no problem choosing him because it’s not really a CHOICE she’s making since she’s believes it’s her “destiny”.  Sometimes I just can’t with this show.  Is it about a kick ass, empowered, sexual women? Or is it about a child who can’t make her own decisions? 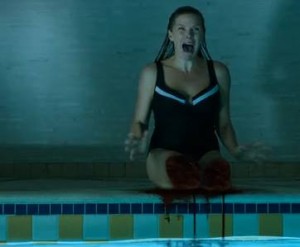 The B story line was mostly forgettable. With Bo exiling herself; Kenzi, Dyson, and Lauren have taken on a Mermaid case themselves.  Dyson and Lauren continue their bro banter, he continues his unwanted flirting, and Lauren uses her brain to save the day. As usual.  I know that brains over brawn is a thing, but isn’t Dyson a wolf?  He delivered mail, he pulled the stunned mermaid out of the water, and then he choked on water instead of saving Kenzi’s legs.  Please, please Lost Girl put this man to better use.  Sometimes I wonder if they are doing this on purpose (female empowerment show and all), but then I think that maybe they just really think all this is making him badass.  If I could actually ask show running Emily Andras (@emtothea) and get a straight answer I would.

Was I entertained?  Of course!  Anytime Lauren and Kenzi are on screen I’m enjoying the episode. Kenzi even used the “Shadow Thief” training that Dyson taught her to steal Lauren’s panties. (He swears he didn’t teach her that though.) Even though it came from out of the blue, I like the banter between Dyson and Lauren.  I even actually love Dyson when he’s with these two women.  Will it continue?  One can never be too sure with Lost Girl, but continue it will and next week we get Fae Zombies?  I shake my head, but I’ll see you all next week since my addictions are not rational.

Quote of the week