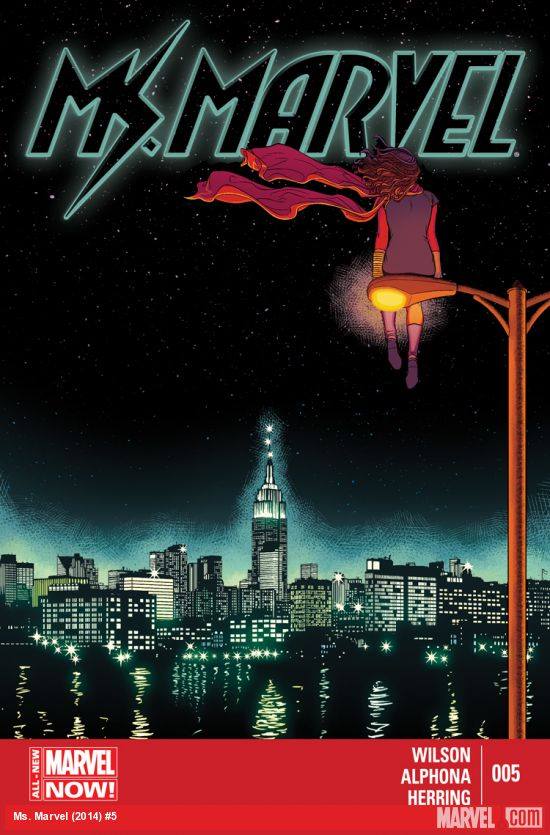 Issue #5 of Ms. Marvel may have ‘merely’ given us the superhero training story, but as with everything else in the series it presented the whole thing in a very entertaining manner. Being a hero isn’t easy, but Kamala seems ready to take on any challenge that comes her way.

One of the things I liked best about this month’s issue was that Kamala lost. Seeing how confident she was, I was expecting her to succeed, but her inexperience showed when the battle started. The man who took Vic hostage was revealed to be ‘The Inventors’ minion and he had an army of little laser shooting robots at his disposal, so Kamala’s first rescue mission was a total disaster, causing her to flee the scene.

This issue did reveal a bit more about her healing abilities; it reminded me of Sakura and Tsunade’s ‘Strength of a Hundred Seals’ ability from Naruto, where their wounds (even fatal ones) can be healed by draining the user’s life force. Kamala’s wounds healed and there was a strain on her life force in a similar manner; she also felt very hungry. So I guess that whenever she heals herself, she’ll need to down some calories to make up for the energy lost during the healing process. Regardless of how her healing is accomplished, though, I’m glad she has such an ability, because I think she’ll be fighting villains solo for a long time. 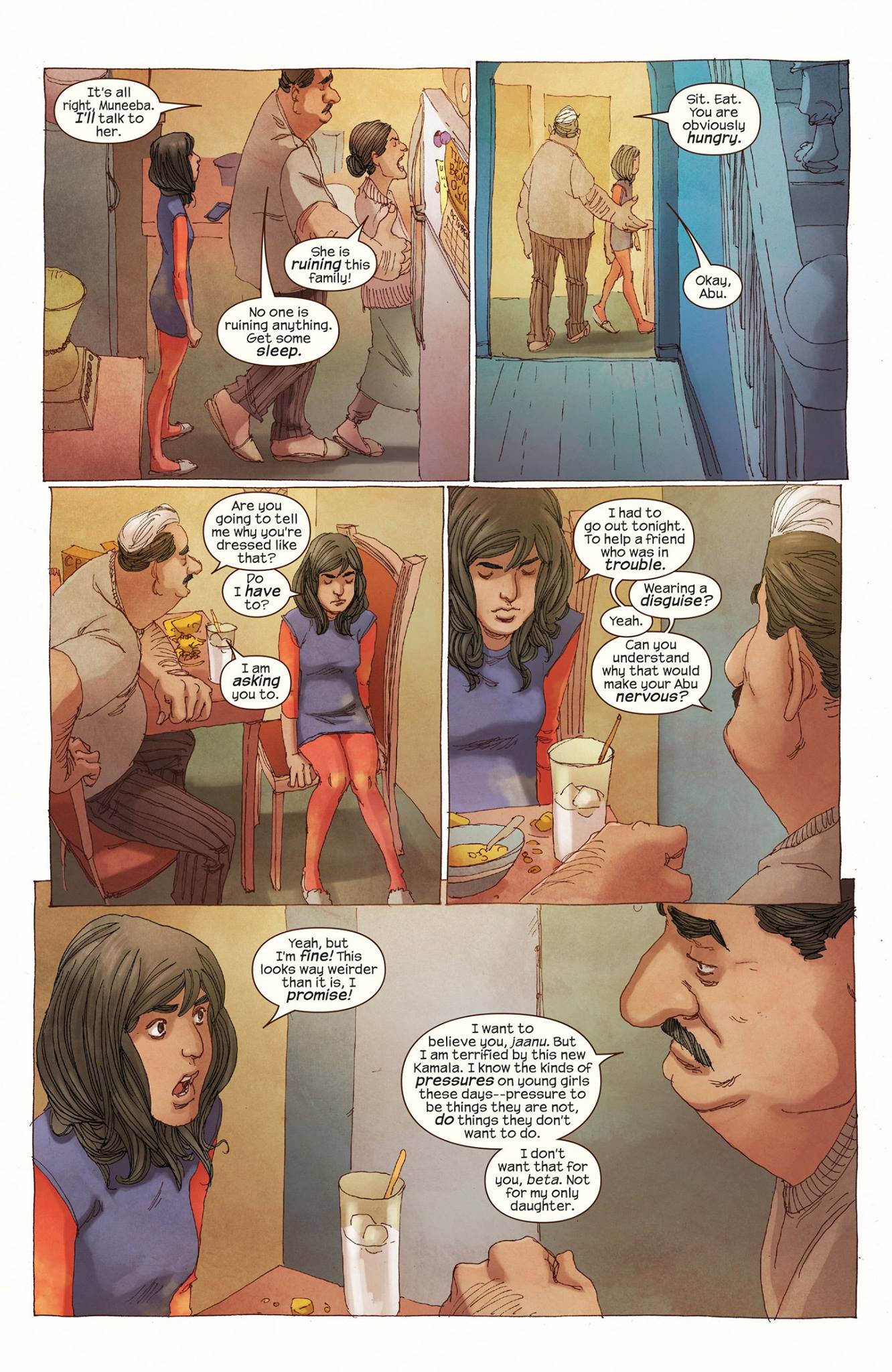 There aren’t a lot of superhero comics that show the protagonist’s interactions with their family members, and that’s where this series really shines. It’s refreshing to see an underrepresented culture, but also a family that feels similar to a lot of readers while still being unique. The panels showing Kamala having a heart-to-heart with her father were very powerful. Her parents love her, and they are strict because they want her to be safe. The whole scene was amazing and I had a feeling that Kamala was about to share her superhero secret with her father, though in the end she didn’t do so. But maybe she’ll admit it down the road, because her father does come across as a very understanding man. He even told her that she didn’t have to be like anyone else and should become the best version of herself. I think her father’s words spoke to the young heroine and she decided not to imitate Ms. Marvel or any other superhero, but instead to try to become a role model in her own right. Even the Islamic meaning of her name, ‘Kamala’, is ‘perfection’ or ‘completeness’.

However, Kamala’s training session with Bruno confused me a bit. Though the panels were fun to read, I couldn’t understand why both of them were wasting time that could have been spent saving Vic. Thankfully it turned out that Kamala only trained for a day, although to me it felt like a week.

The series has a way of putting little comedic scenes in almost every panel, and Kamala’s training session was no different. Seeing Kamala extend her legs to take longer strides and run faster was quite hilarious, and it’s also nice to see that she makes do with what she’s got. Not everyone has a multi-million S.H.I.E.L.D training facility or an X-Men Danger Room! I’m also enjoying the friendship between Bruno and Kamala, but I’m worried about the romantic feelings Bruno has for her – I don’t want any unnecessary drama between the two. Their relationship might start a whole other debate about what’s right and wrong in religion if Bruno confesses his love for her, and I have feeling Marvel wouldn’t risk such a thing this soon in the series.

In the end, Kamala was able to rescue Vic. She might not be Tony-Stark-level intelligent, but she seems quite capable of adapting to whatever environment she’s in. In this case she used the antagonist’s own little robots against him and led Vic out of harm’s way. For her first mission, I think the new Ms. Marvel learned a lot. She is New Jersey’s hero and she won’t let anyone harm her city.

The real identity of The Inventor was also revealed this month and apparently he’s a giant bird. Yes, it could be a mask, but I wouldn’t put it past this quirky series to make him a person who turned into a human-bird hybrid after his Inhuman powers kicked in.

Did you read this month’s issue of Ms. Marvel? Please feel free to share your thoughts in the comment section below.