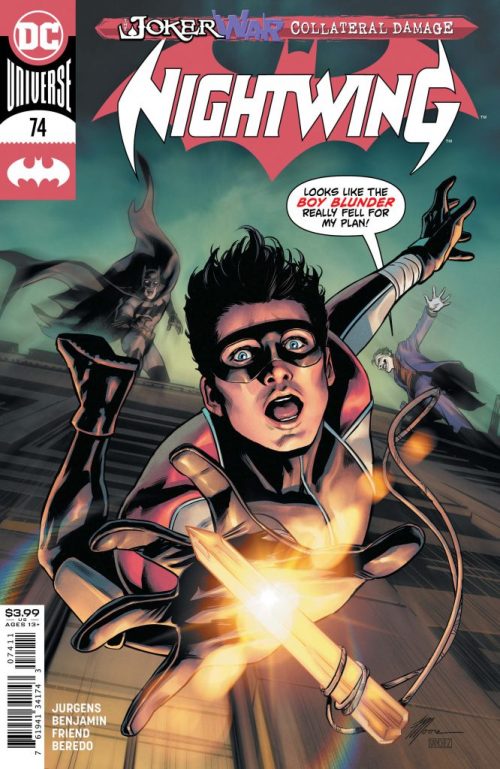 Nightwing issue 74 begins where the previous issue left off, with Dickyboy joining up with Red Hood and Drake, who is now Robin once again. It doesn’t take them too long to figure out that not all is as it seems with their brother.

Nightwing issue 74 finally has us saying goodbye to Dickyboy and hello again to Dick Grayson! And honestly, it has been a very long time coming. It seems like it has been years, and that’s because it has been. Of course, his return ultimately took a few months longer due to a certain pandemic as well. Regardless, Dick Grayson is back! Obviously, I was very happy to see my favorite character back and definitely enjoyed this issue!

As I mentioned earlier, it didn’t take too long for Jason and Tim to find out that there was something wrong with their brother. Dickyboy laughing about the possibility of children getting blown up was a fairly good indication that Dick did not have his real memories back. Dickyboy begins fighting his brothers, which they were not at all prepared for.

Eventually Robin goes to take care of the bomb while Red Hood continues to face off against Dick. Tim warns Jason not to hurt Dick because he’s family. Jason doesn’t care so much about that if Dick dares to cross over the line. However, when Dick pulls out a gun, Jason firmly believes that he won’t shoot him. Ultimately, it’s not Jason who is able to get through to Dick, but rather a couple of other people who are very important to him.

As for Joker and Punchline, mostly they observe what Dickyboy is doing throughout the issue and do not get involved in too much of the action themselves. When it looks like their plan is starting to fall apart, they hightail it out of there rather than sticking around for the fallout.

The writing by Dan Jurgens continues to be solid. You could tell from the writing that he seems to be as happy about Dick Grayson being back as the fans are. I’m also kind of excited to see Jurgens write Dick Grayson proper. I’m curious to see what direction he will take the character in next.

I’m continuing to enjoy the art by Ryan Benjamin. His son of Joker Dickyboy Grayson is disturbing to look at. His facial expressions and overall demeanor are very off-putting. Benjamin’s use of facial expressions for all the characters in general really helps to add to the story.

My only complaint (and this may be more of an editorial thing rather than the artist) is Tim Drake looks like he’s about 12 years old. I’m not sure if that was intentional or if maybe somewhere along the line the Robin in these issues was supposed to be Damian Wayne, but they decided to change it. It doesn’t mesh with the Tim Drake in Young Justice who looks like an older teen and became Robin again in the most recent issue.

Naturally my favorite part of the Nightwing issue 74 is when Dick gets his memories back. What’s even more awesome is that he is actively involved in getting those memories back. He fought against the Joker’s control to become again who he was always meant to be: Dick Grayson, Batfamily member and friend to many. My favorite lines are when Dick was in the midst of regaining his proper memories. He hears the thoughts and opinions about him from those who love him most: his mother and father, his adoptive family, his friends, and his girlfriend. It basically comes off as a love letter to the fans of Dick Grayson.

Needless to say, I’m very happy that Dick Grayson is back and I’m not at all upset that it took the Joker War to do so. I’ll be the first to admit that I was apprehensive at first, but overall, this has actually been a very enjoyable storyline. Unfortunately, not everyone is happy at the end of the issue. It does say “Joker War: Collateral Damage,” on the cover after all. There is one more issue of the Joker War in the Nightwing series, so it’ll be interesting to see where Dick ends up at the end of all of this next month.