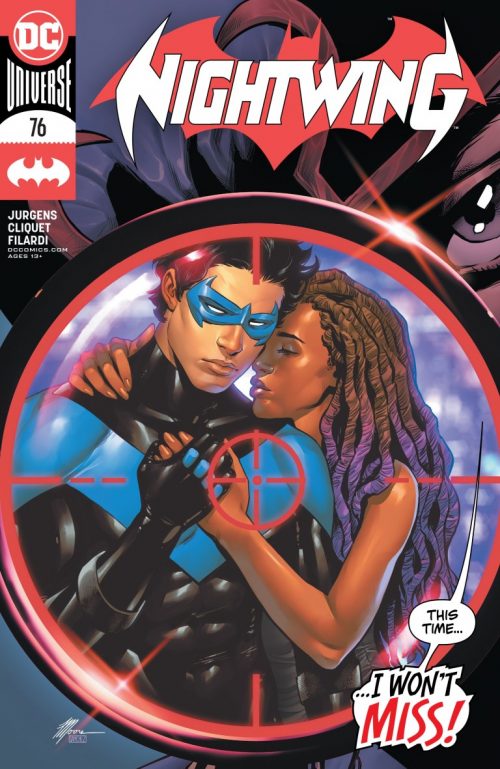 Nightwing issue 76 begins with a brief flashback of when Dick Grayson was shot in the head. He wonders whether that bullet was always meant for him, or if it was meant for Batman or even Commissioner Gordon. But he can’t contemplate that for too long because KGBeast has his girlfriend Bea and is threatening to kill her!

Nightwing issue 76 does not take long to get into the action. KGBeast has Bea and is using her to get to Nightwing. KGBeast sees the fact that Nightwing didn’t die when he shot him as his one big failure. He plans to rectify that, but not without hurting Nightwing both emotionally and physically first. Fortunately, Bea is no lightweight and knocks KGBeast off her on her own. Then, Nightwing is able to jump in.

Dick taunts KGBeast a bit to distract him and he easily falls for it. Dick not only disarms KGBeast with his fighting, but with his words as well. Nightwing claims KGBeast was afraid to face Batman and Nightwing head-on. Dick isn’t wrong. He is definitely better with close combat than KGBeast is.

Just as when Robin (Damian Wayne) faced KGBeast not too long ago in an issue of Teen Titans, it doesn’t take long to take KGBeast down with some impressive and yes, a bit flashy, moves from Nightwing. Did I mention yet how great it is to see Dick back as his true self? I so missed Nightwing these past couple of years!

Sadly, even if Dick won the fight with KGBeast, that doesn’t mean he has a chance to celebrate. KGBeast knows Bea is someone important to Nightwing. Because of that, she’ll always be in danger as long as they’re together. (Not to mention Bea has been out in public with both Ric Grayson and Nightwing now in a way that is obvious that they are together.) So, Dick feels he has to make the tough decision to break up with her. Though he does so by pretending that he forgot his feeling for her.

Not too much happened in this issue of Nightwing, but I felt it was a nice wrap up of the Ric Grayson storyline. It tied up a few of the remaining loose ends. The fight with KGBeast was filled with a lot of action and seeing Nightwing fight is always fun. It was very emotional too. Dick feels conflicted. Alfred had always hoped that Dick could have more of a normal life than Bruce does. Bruce told Dick that that wasn’t possible for them. And by the end of this issue, Dick comes to the conclusion Bruce was right.

I have to commend writer Dan Jurgens for not killing Bea off for the man pain. We have more than enough of that in comics already. It is a very easy way out for a writer; allowing their character to be motivated by the death of someone important to them. But it is also cheap and overused. So, while I still think it was a bit of a cop-out to essentially just write Bea out of Dick’s story, I greatly appreciate she wasn’t killed off in order to do so. I was really rooting for them too! But alas, many of the more mainstream, “Big Two Comics” tend to shy away from love stories in general.

Ronan Cliquet’s art continues to be solid. I feel like he had a lot of fun with Nightwing’s fight moves as well. Nightwing doesn’t tend to stay in the panels proper; his movements are often outside of them. I feel like that really helps to illustrate Nightwing’s constant movement. It feels like there is not much that limits him when it comes to fighting.

When the action calms down in the second half of the issue, Dick is not outside of the panels as often. I think it was especially powerful seeing Nightwing take off his mask to cry. He really didn’t want to lie to Bea and hurt her and himself in the process. He truly thought this was what was best for her.

My favorites parts of Nightwing issue 76 were definitely the fight scenes between Nightwing and KGBeast and also the emotional rollercoaster Dick went through from the beginning to the end of the issue. He was crushed to break up with Bea, but the last panel shows a Nightwing who is determined and perhaps a bit hopeful for the future.

Now that both the Ric Grayson and Joker War storylines have essentially ended, I’m excitedly looking forward to what Nightwing will get up to next!

1 thought on “Nightwing Issue 76 Review: “The Problem with Napkin Man””