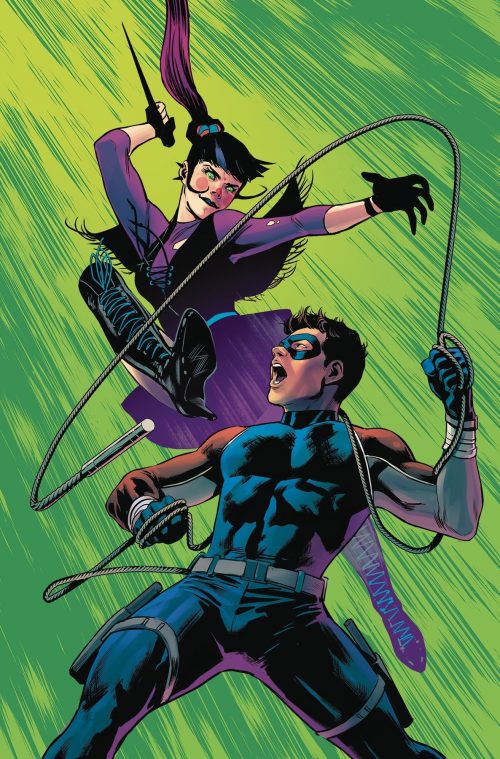 Nightwing issue 72 continues the “Journey to… Joker War” and keeps the same momentum going that we saw in the previous issue. The amnesiac formally known as Ric Grayson is beginning a new adventure. This time with a new family. Only this family spells disaster for his real friends and family!

Nightwing issue 72 starts out with Ric’s girlfriend, Bea Bennett, making a Bat Signal out of wood and lighting it on fire. She’s hoping to attract Batman for help. If you recall in the last issue, Bea was knocked out by the Joker while he was talking to “Dicky” Grayson. Well, Bea can tell something is up because Ric just isn’t acting right. She’s determined to find out why by calling in the big guns – Batman himself.

However, her Bat Signal is intercepted by Batgirl. Barbara understands Bea’s concerns (she wishes she had ignored Batman and checked in on Ric more) and sets out to find Ric and bring him back to the family. However, he finds her instead. Right away she notices something off with him and isn’t sure if she’s speaking with Ric or Dick. To be honest, I don’t think he knows any more either.

Barbara isn’t really able to get anywhere with Ric and before Batgirl can make any headway, Punchline makes her grand entrance. What happens next is surprising for Barbara, but not so much so for the reader. We already know that the Joker has the “Identity Crystal” that the Court of Owls used to control Ric. And as such, this new version of Dick Grayson is wildly unpredictable.

I have to say that writer Dan Jurgens is really knocking it out of the park lately with his writing for Nightwing. I was originally quite apprehensive about Joker War and didn’t think I would enjoy it at all, but so far, I’ve enjoyed every Nightwing issue that is part of this storyline. While earlier issues were making progress to getting Dick’s memories back, they felt a little bit stagnant. There was a lot of Ric thinking about his dual set of memories and getting headaches.

Now that plot point now seems to be a thing of the past. And while I wasn’t looking forward to Dick being mind controlled once again, I will admit that I’m finding myself very intrigued and entertained. I think that upcoming issues of Nightwing and other series in the Joker War will illustrate just how important Dick Grayson is to the Bat Family and how he helps to hold them all together.

I’m also perhaps somewhat apprehensively enjoying Punchline as a character. As she proclaims to Batgirl in this issue, she is definitely not a copy of Harley Quinn. I’m curious to see if we will be learning more about her background as the story progresses. She and Dick certainly have an interesting dynamic as partners in crime!

Lastly, I would be remiss if I did not mention that I really do think Ric Grayson is no more. He is in fact Dick Grayson again. He’s “fo’ sho” not the Dick Grayson we know and love, but at least he has the right name again thanks to the Joker. (Which is definitely not something I thought I would ever be saying!)

If you’re like me and you’ve been waiting for Dick Grayson to make a comeback or if you are a fan of Batgirl and/or Punchline, I highly recommend picking up Nightwing #72. It’s fun, entertaining, comical, and heart-breaking. Overall, a great combination for good reading. I’m definitely looking forward to the next issue featuring Dick Grayson’s new family!