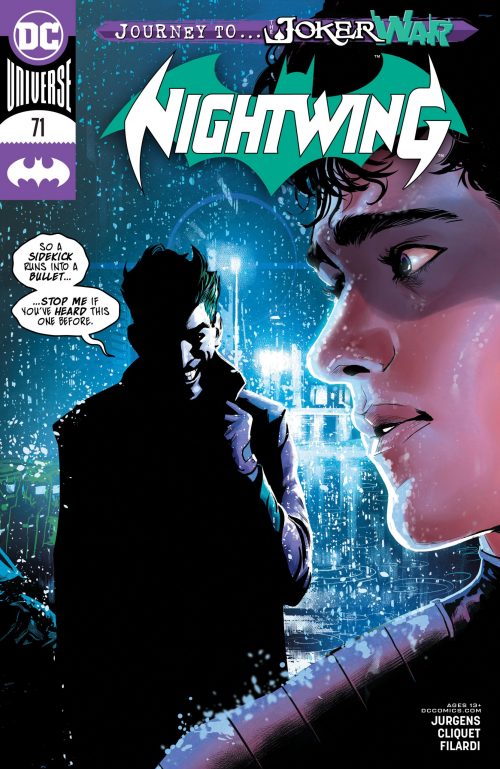 Nightwing issue 71 finally gains some momentum in the story line, thanks to the Joker. Ric Grayson’s life is about to change a lot; he just doesn’t know it yet. What happens in this issue is a “Journey to…Joker War!”

Nightwing issue 71 begins as previous Nightwing issues have lately, with Ric experiencing headaches and trying to make sense of his dual memories. Which ones are real? How can he tell? His girlfriend Bea is worried about him because his headaches are getting more serious. While Ric is distracted by a big (really big) bad outside of Bea’s bar, the Joker shows up with plans for Ric.

Maybe it’s because I took a break from Nightwing comics prior to Ric being a thing, but I was surprised by just how much the Joker knows about the Batfamily. Not only does he know who Dick Grayson is (Joker kept referring to Ric as “RicDickRichardRobinNightwing.”) but he knows about how Dick’s parents were murdered and how Bruce Wayne took him in.

Of course, all is not well when the Joker is around, and he has a trick or two up his sleeve, which only spells disaster for Ric. Joker basically holds the keys to Ric’s memories. He’s not exactly the kind of person you would want to have that kind of power. He’s more nefarious and definitely more unstable than the Court of Owls.

I actually found myself really enjoying Dan Jurgens’ writing for Nightwing #71. I was apprehensive prior to reading because I knew how it would end and didn’t want to see Ric once again being controlled. However, the Joker, who I usually don’t care for in the slightest, amused me quite a bit and I ended up laughing out loud more than a few times. “What’s your name?” “Ric.” “Yuck, no one likes that name!” Hard agree, Joker. Hard agree.

The art by Ronan Cliquet continues to be solid and Nick Filardi’s use of color works really well. The contrast of the darkness of night in Bludhaven and the psychedelic colors of the Memory Crystal is striking. As always, the cover art done by Travis Moore is absolutely gorgeous down to the rain and the detail in Ric’s eyelashes.

Overall Nightwing #71 was a much better issue than I thought it would be. I was very entertained. I do feel a little insulted with how much I agreed with the Joker this issue, but when he’s right, he’s right. Ric is a terrible name for Dick and Dick Grayson and Nightwing is who he is. Of course, the Joker is not as altruistic and he pretends to be and I’m kind of horrified with the angle he takes with Ric’s (Dicky’s?) memories.

If you’re a Dick Grayson fan like I am, I think you’ll be happy with the direction the story is taking in Nightwing #71. The writing is smart and the plot is finally moving along. Sure, I’d be happier if Joker was far away from Ric, but I’m happy to get some real movement toward getting Dick Grayson and Nightwing back. I’m certainly looking forward to the next issue as we get into Joker War.