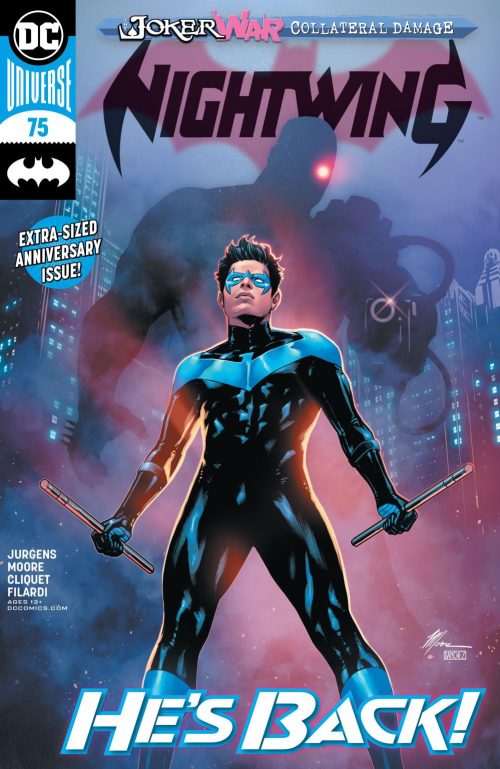 Nightwing issue 75 takes place before the events of Batman #100 where Dick Grayson, with his memories newly intact, joins Batman and the rest of the Batfamily to take down the Joker, Punchline, and Joker’s minions. This anniversary issue of Nightwing goes into what Dick was doing soon after he got his memories back.

Nightwing issue 75 covers a lot of ground in 48 pages. Dick spends time with a number of people who are important to him and who he is also important to. He also spends some time trying to tie up some loose ends from when he was Ric Grayson. Dick’s head is still a mess which really is not at all surprising. He’s gone through some very traumatic events.

Dick encounters friends and family who are excited to hear that he has finally gotten his memories back and is Dick Grayson again. Donna and Garth, who were his teammates in the Teen Titans, stop by his hotel room to catch up with him. They try to get Dick to go with them to the Titans Tower for old time’s sake, but Dick isn’t really sure that Nightwing is back just because he got his memories back.

Dick also spends time with Barbara as Batgirl while he is still wearing his non-descript blue, white, and red costume. She’s not really a fan, nor is Batman when he works with him either. Both of them just want him to be Nightwing again, to fully embrace who Dick Grayson truly is. But Dick just isn’t ready yet. He has a lot to sort out in his head. He works through some of his inner turmoil by talking to Alfred’s grave, imagining how he would respond to what Dick is thinking.

Once Dick finally comes to a decision and puts the Nightwing costume back on, he has some people from his life as Ric that he has to follow up with. He needs to connect with those he left behind in Bludhaven: the Nightwings and his girlfriend, Bea. Meanwhile, Dick doesn’t know that a certain someone who failed to kill him previously still has it out for him.

Dan Jurgen’s writing in this is thoughtful and respectful to the character as well. I super appreciate that the trauma that Dick has gone through wasn’t just ignored or swept under the rug. For this issue at least, it is being addressed. Just because Dick got his memories back doesn’t mean he’s magically all better. He was Ric for quite a long time. He was mind-controlled by more than one person who wanted to use him for their own purposes.

Now Dick’s back and people still want him to be who they want him to be. They want things to go back to normal, but they aren’t really considering Dick and how he feels about everything. Especially people he’s always been so close to, like Bruce and Barbara, feel that they know what is best for Dick. So, Dick is understandably frustrated, though he understands that those who love him really do just want what’s best for him.

I did see a lot of confusion on Twitter about when this issue took place, too. Some people just plain missed the editor’s note at the bottom on the first page. The box is tiny, under the credits on the bottom of the page, and only a little bit lighter in color to the hotel rug on the page.

Ultimately, I think things just get tricky when multiple books get brought into an event. Dan Jurgens is trying to tell his own Nightwing story while also having to stay true the events in Joker War and what Batman is doing. It gets more than a little complicated for writers and readers alike.

My favorite parts of Nightwing issue 75 were Dick speaking to Alfred’s grave and his interactions with his girlfriend Bea. I’m really hoping that she doesn’t get killed off for the man pain and that she and Dick can figure things out. I’m rooting for those kids!

Overall, I really enjoyed this issue and I hope the story continues to not shy away from what Dick is going through. It’s something refreshingly different to see for Nightwing in particular.

2 thoughts on “Nightwing Issue 75 Review: “Who is Dick Grayson?””