Once Upon a Time Season 3 Premiere Review 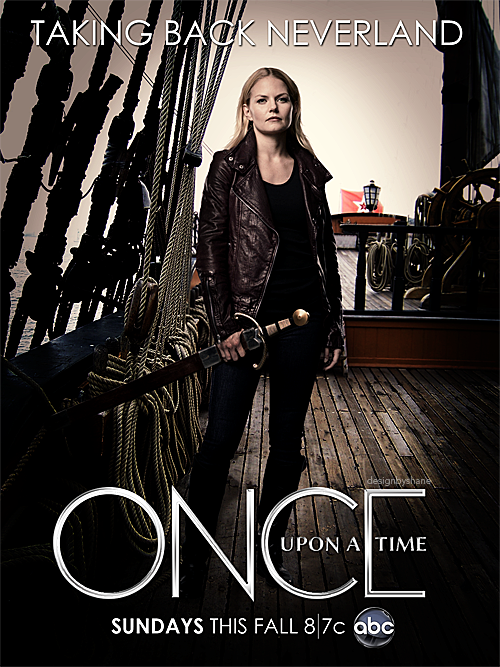 If you haven’t watched the premiere yet, there will be spoilers. You’ve been warned.

The premiere starts with Emma giving birth. The interesting aspect about this is that Henry is born at 8:15,  the same time the Storybrooke clock showed before Emma came to town. What is the significance of that time? It’s a welcomed, added layer to the mystery. Let the theories commence.

Then the show pans to present day, and we see Tamara, Greg, and Henry land by lake to Neverland.  Henry’s faith in his family is quite admirable.

Next, we see the Jolly Roger and its occupants. Hook and Regina have a nice chat about how villains don’t get happy endings. Regina asks Hook if he believes that, and he says they did waste a lot of time on revenge. It was pleasant to see two villains being a bit vulnerable with one another, and still wanting what some heroes get: happy endings.

Emma is angry with her parents; she’s annoyed by their optimism. Snow and Charming just want their family back together. Rumplestiltskin comes above deck after changing clothes and uses magic to leave the ship because he wants to succeed, but not before telling Emma she doesn’t have faith in anything. Rumple not playing nice with others – how shocking.

The Lost Boys appear as Tamara, Greg, and Henry are walking through the jungle. Tamara and Greg realize that they’ve been duped by Pan. Their endings were less than satisfactory throughout the second season, especially towards the end. It seemed they were a big threat, but in the end they were just pawns. Greg’s shadow is ripped by Pan, and Tamara is shot in the back with an arrow.

As Rumple is walking through the jungle looking for Henry, he finds Tamara and cures her injury. But once she tells him about Henry and being sorry about Neil, he takes her heart out and kills her. It was a build-up for these two, who seemed were going to be formidable enemies for Emma and her crew, and their send-off was disappointing.

Rumple meets with one of the Lost Boys who warns him that if he’s here for Henry, he’s an enemy of Pan. The Lost Boy called him the Dark One, meaning Rumple has been there before. For what purpose? He’s also given a doll or is it a voodoo doll? It has an emotional effect on Rumple, though, so I can’t wait to get that backstory.

When Neil wakes up, Mulan, Aurora, and Philip are there to help him try to communicate with Emma. Aurora can’t communicate with Henry as she did last season. Is Neverland blocked from using certain type of magic?

Neil and Mulan make a trek to his father’s castle, and who else is there? None other than Robin Hood. Robin Hood wasn’t expected to come out till later in the season, so this was an enjoyable surprise. Neil finds his father’s staff and shows him a hidden cabinet, where he finds a crystal ball and uses it to see that Emma is in Neverland. The question now is: How will Neil get to Neverland?

As Emma and her crew have her mermaid experience with the storm, it was good for Emma to finally take charge. She finally seems to gain self-confidence. After two seasons, she needs to stop doubting herself, and have more character development. This was a decent step forward.

Henry runs as the Lost Boys attack Tamara and Greg. Along the way, he finds this Lost Boy who allegedly left the group, and has pixie dust. Henry uses the pixie dust on himself and the boy, and they fly to escape the Lost Boys. To use the pixie dust, the person needs to believe. The pixie dust color seemed very reminiscent of Tinker Bell’s dress color.

The Lost Boy with Henry turns out to be none other than Pan. It was a nice reveal, and showed how this is not Disney’s Peter Pan at all. Pan needs Henry because he has the heart of the truest believer, and Henry passed the test by using the pixie dust.

This season started off well. There was a good balance with the characters. Sadly, Storybrooke was not included. Hopefully we’ll get to see what Belle and the other residents are up to in a later episode. The change with Pan is great, and who knows? In this version Hook might turn out to be the hero.

A couple of quick points:

– Hook’s line about Rumple using the time to get a wardrobe change was quite funny.

– Neil telling Mulan there’s a movie about her, and that it was “pretty good,” was a great Disney reference. As was Mulan’s reaction, “What is a movie?”

– The mermaids were quite badass.

– Regina and Snow had an actual fistfight. This was unexpected, but not surprising considering their history.

Previous:Doctor Who News: Peter Capaldi Casting Part of a Plan?
Next: Sleepy Hollow Episode Review: For the Triumph of Evil