Doctor Who News: Peter Capaldi Casting Part of a Plan? 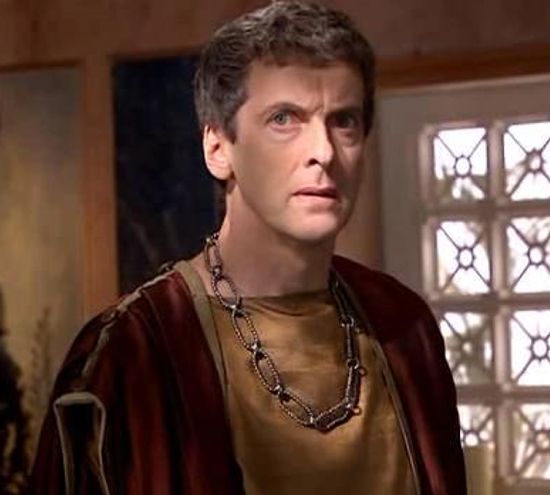 In a recent interview with Nerd³ Steven Moffat revealed some rather surprising information regarding the casting of Peter Capaldi.  “We are aware that Peter Capaldi’s played a big old part in Doctor Who and Torchwood before and we are not going to ignore that fact,” he told them.  “Russell [T Davies] told me that he had a big old plan as to why there were two Peter Capaldi’s in the Who universe: one in Pompeii and one in Torchwood. When I cast Peter and Russell got in touch to say how pleased he was, I said, ‘Okay, what was your theory and does it still work?” and he said, ‘Yes it does. Here it is.’”

Well my roommate is going to be happy with this news.  Seriously.  The fact that he’s in the universe twice already has been bugging her since the casting was announced.  Relax!  They have a plan!  Maybe.  Well… sort of.

A popular Tumblr joke is that his character in Fires of Pompeii is actually the twelfth Doctor fully aware that it is a past version of himself.  This would explain why and how he was able to take the TARDIS.  It’s incredibly sassy and hilarious that the Doctor to steal his own TARDIS and I’m kinda rooting for this theory.  The interviewers from Nerd Cubed also had a theory that it could be the Doctor possibly using the Chameleon Arch to become human again since he was able to notice the TARDIS unlike most regular humans.  It seems that Moffat and Davies have something a little different in mind, though.  Something a little less sassy and a little more logical.

“The face is not set from birth,” he went on to say.  “We know that’s the case because in The War Games he has a choice of faces. So we know it’s not set, so where does he get those faces from? They can’t just be randomly generated because they’ve got lines. They’ve aged. When he turns into Peter he’ll actually have lines on his face… So where did that face come from?”

The War Games is the final appearance of the second Doctor, Patrick Troughton, which aired at the end of season six.  In this episode his regeneration is actually imposed on him as a punishment for stealing the TARDIS.  He’s also exiled to earth and the “secrets of the TARDIS” are taken from him.  This is a very unique regeneration, though, as it’s not really done on accident as the result of injury or near death.  It’s a very intentional act and he’s actually given the choice.  For most of his other regenerations he’s actually pretty damn surprised by his appearance.

We also know from River Song that you can control some aspects of a regeneration if you concentrate hard enough.  She was focusing on a dress size, for example.  Romana also displays a lot of control over her ability to regenerate as she goes through several different looks before deciding on the form of Princess Astra, who was a character in the last serial of the previous season.  Yep, that’s right.  A Time Lady was played by an actress who played a previous character.  So there is a precedent.

This initially seemed like a case of reusing BBC actors, which Doctor Who does quite a bit (Karen Gillian and Eve Myles, for example) and that could very well have been what it started out as.  But now it seems like it’s developing into something deeper.  Color me intrigued.