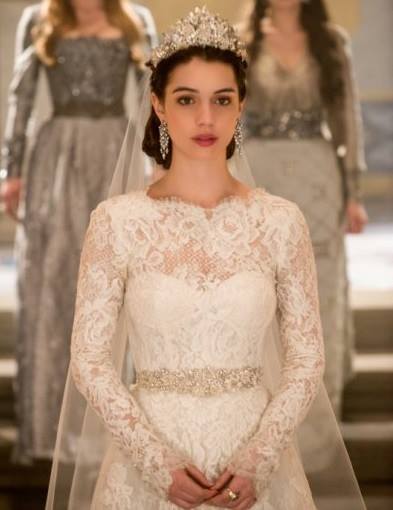 The fans of one ship mourn while the fans of another rejoice.  Meanwhile the ship between me and Catherine remains strong, as this woman is flawless and better than all of us!  But I will try to reign in my enthusiasm (pun intended) because this was a pretty exciting episode with many great moments.  Amy Brenneman was very entertaining as Mary’s mother, Marie, and I can’t help but want to see her again!  Mary and her ladies could learn a thing or two about scheming from Catherine and Marie.  But before I get too ahead of myself, let’s jump into the dirty details of “The Consummation”!

And the winner of this round is Frary!  Yes, it seems that this was the episode where the decision would finally be made, and I must say: I’m pretty relieved.  There’s only so long that they could have dragged out this story line, and it gives a strong indication of where the writers are going with this.  I had a moment where I really thought they were going to give history the finger and blaze their own path.  But they appear to be sticking to what they said in interviews before the show began, where they would be following the major plot points in the story of Mary Queen of Scots.  That appears to include the fate of our dear Francis (although not everyone thinks he is so dear after tonight’s episode).  There was a bud of hope that sprang up last week after the supposed death of Clarissa, with people saying, “Nostradamus predicted the death of Catherine’s first born, which in reality is Clarissa!”  Come on, guys…you didn’t think it was going to be that easy, did you?  I can’t help but be happy that Clarissa is still alive, but I wonder how her feelings toward Mary have changed.  Does she still feel a sense of kinship or has that faded in the face of vengeance?  I can’t wait to learn the answers!  Nostradamus’ visions were pretty gut-wrenching, as all of us Frary fans wanted so much to have a happy ending for our OTP.  I’m still interested to see how this will play out and where the end of the season will find this doomed couple. 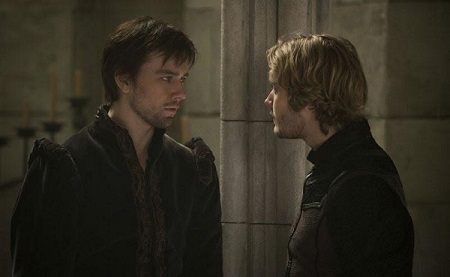 Now in regards to the love triangle, I am on the side of Francis and Mary.  But that doesn’t mean I don’t feel sympathy toward Bash and indignation at him having to watch the woman he loves have sex with his brother.  But my sympathy for him ends with the way the writers are portraying him.  In last week’s review, I mentioned Torrance’s tweet about how happy couples are boring.  Well, you know what else is boring?  Wholly good characters, which is how they seem to be writing Bash!  This fella can do no wrong, but I can’t help but disagree.  While he may be all about putting Mary’s best interests first, if he had become king he would have run the risk of neglecting the best interests of the people of France.  An LJ friend of mine, honeymink, made an excellent point about Bash, saying, “When Bash says he doesn’t really care about France, yet he’s supposed to be king and Mary queen, I think he was really pushing a lot of responsibility on her as Mary obviously has been born and bred to rule and does care a great deal for her people. And from the sound of it, she’ll have to take on this same responsibility for the French. Perhaps she may be able to lean on Bash but all in all from how I interpret his words/actions, he won’t be able to share this responsibility in equal parts with her…What bothers me about Bash being so dismissive about France is that I am truly puzzled: Doesn’t he understand that a country is about the people? Like the people in the village/his distant relatives for instance? Doesn’t he understand that though it is a great responsibility, one he never wanted or trained for, there is a lot of good he could do? I thought about that when he listened to all the petitioners and was incredibly bored by common people who looked for his guidance – it made me realize that I don’t think Bash cares much for anyone he doesn’t have some personal ties with. It seems as if he cannot think in a more abstract way and transfer his love and care for Mary or his mother or his cousin or even his half-siblings to the people of France for which he’d be responsible.”  It may seem like a harsh assessment, but what is a king’s first duty if not to his people?  Let me be clear in saying that I don’t think Francis is a saint; I never have…and that’s why I like him!  He has flaws, which makes him interesting to me!  Like Catherine’s love for her children, I have never and will never doubt Francis’ love for Mary.  Their love story has been rocky, but again, that’s what makes it interesting to me. 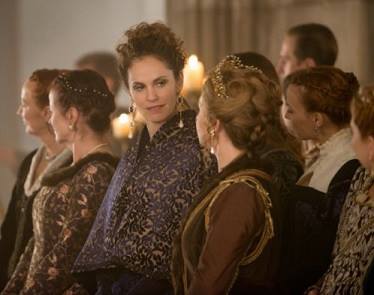 Now Francis and Bash’s own relationship is rocky to say the least, but I don’t believe he tried to have Bash killed.  That plan reeks of my wicked lady love Catherine (or Henry because Bash almost cost him his chance at the English throne or perhaps even Marie).  Now whether I’m right or not remains to be seen, but if they want to keep Francis as a sympathetic character, they can’t have him plotting to kill Bash.  Francis has every right in the world to be angry with Bash, but from what I’ve seen of him thus far, he is not the kind of person to do something like this…which brings me back to who is.  Hands down, my favorite scene in the episode is Catherine marching around, planning the details leading up to and after her execution.  I couldn’t help but cry out, “Could you stop being so perfect please?!”  I was overjoyed that they finally wrapped up the question of whether she would be executed or not, but not before she has some fantastic scenes with Marie, Mary’s mother.  They are my new brotp for this show!  I want The CW to give them their own little web series as pen pals just to see the snark and sass that would take place!  But anyway, I was correct in my past assumptions that Marie would be less than pleased with the potential match of Mary and Bash and appeared to have arrived at court to take care of that little “problem” post haste!  The false announcement of the death of England’s Queen Mary was quite clever, even if Scottish Mary didn’t appreciate the deception.  I saw a couple theories on Tumblr, saying that perhaps Marie was behind the plot to kill Bash.  It seems a bit unlikely, but it would certainly be a twist.  My money’s on Catherine, my mind far removed from even the idea of Francis being responsible. 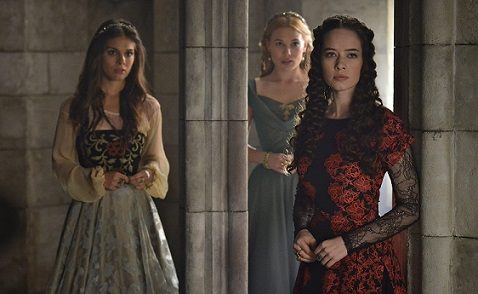 The claws are coming out amidst Mary’s ladies in waiting.  Kenna restarted her thing with Henry, which I was a bit ambivalent towards, and later blackmailed Lola about Francis when questioned about it.  I wonder if the writers will expand upon this friction between the two and if this will cause Kenna to spill the beans to Mary later down the road.  I do like that they had Kenna asserting herself with Henry.  She had become so passive, so to see her put her foot down when it came to her best interests was really cool to watch.  My only problem with Kenna is that the closer she gets to Henry, the more selfish she becomes.  In the first half, she got really catty with Mary, saying something to the effect of, “I don’t answer to you”, when Mary expressed concern over her decision, and now she lashes out at Lola.  I hope they find a nobleman for her and that they have a real connection, so she can get away from Henry’s toxic influence.  I really hope they bring Greer back to the forefront soon.  I want to know how things are progressing between her and Leith, our lovely kitchen boy!  According to an Ask Ausiello article, the duo might soon become a trio, as yet another love triangle could be introduced.  Greer is by far my favorite lady, so I’m eager to see her get some more screen time in this second half.

As a whole, I enjoyed this episode.  Marie appears to be heading back to Scotland (readers, please give me Catherine/Marie pen pal fic), and things appear to have calmed for the moment.  But knowing this show, it won’t stay that way for long, especially with Bash hellbent on finding out who tried to have him killed.  What were your thoughts on tonight’s episode?  What were your favorite and least favorite moments?  Comment below and thank you for reading!