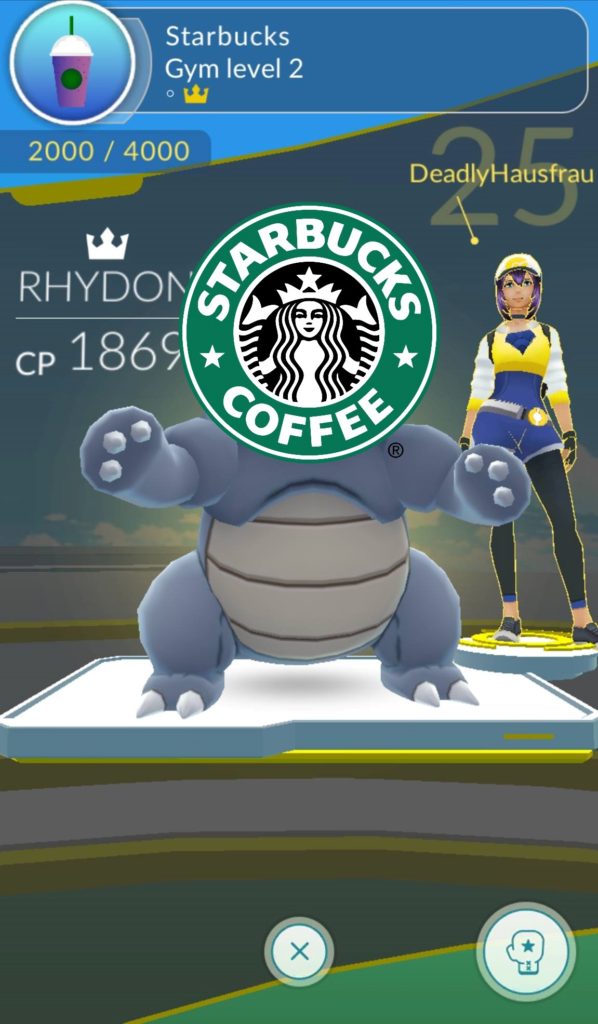 Sitting in the endless Starbucks drive-through line today, I remembered there was a Pokéstop at the hotel next door that I might be able to reach…so I whipped out my phone, and as soon as the app loaded a towering red gym stretched over the drive-through line, a gym where no gym had been before.

There are two things here that might be confusing to you. First, yes, I am still playing. The game has issues, I won’t deny that. But I’m a completionist. Once I pick up a game I finish it, and I haven’t caught all the Pokémon yet. I will be running from the meteor that ends this planet trying to hatch one last egg to get the complete set if that’s what it takes. Go ahead and judge.

Second, Niantic hasn’t really added stops on this scale before. They sent out a call shortly after the game’s release this summer asking for suggestions for new locations, but we haven’t seen many before this. I did notice that the humorless, cartoonishly-conservative church near my house got their Pokéstop removed (because why would you want people to associate your religion with wholesome fun?). The partner of one of our editors actually applied for the lake behind their house to become a Pokéstop. They got a rejection letter, of course, claiming that they actually weren’t currently adding new stops…along with a note that the Niantic development team would “follow up” if something changed.

It was pretty clear to all of us that only those willing to “Ponyta-Up” were going to be seriously considered. After all, part of the business model for Pokémon Go (and its predecessor Ingress) is to seek out sponsor locations. Starbucks isn’t the first company to be interested in a partnership; McDonald’s did something similar in Japan way back when the game first launched, but this is the first deal to affect the game on this scale. There are 7,800 new gyms and stops at corporate-run Starbucks (Starbuckses? Starbucksi? What’s the plural of Starbucks?) in the United States. 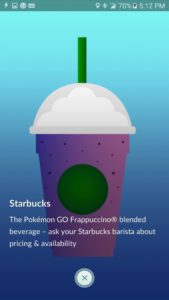 There’s even a themed drink tied to the partnership, the Pokémon Go Frappuccino. It is supposed to be the vanilla bean frap with raspberry and blackberry flavoring. What does it taste like? I can’t tell you, because the barista had no idea what I was talking about. He didn’t even know this was a thing. “We’ve been slammed all afternoon, it was weird,” he told me when I got to the front. “I didn’t know why.” I showed him the in-game “call to action” that pops up if you tap the gym icon and he went to ask his manager before returning with a nervous look, like I was going to rage at him. “I have no idea what that is, sorry. Come back tomorrow and we’ll find out for you, okay?”

I tried the Starbucks across town (another new gym!) and got a similar answer. No idea what the Pokédrink was or how to find out. This guy admitted he used to play and probably would pick it back up with a gym at work.

So apparently, Starbucks rolled out a huge new ad campaign and forgot to tell the hardworking people who make the actual drinks. Since this was only the first day and the second location had been asked twice before me, I foresee a lot of stressed-out baristas getting yelled at until corporate gets their stuff together.

When it comes to the actual partnership, I have mixed feelings. As a nerd who is often broke, it is nice to have a free augmented reality game that’s at least vaguely geeky (I say vaguely because PoGo is not much like actual Pokémon aside from the art). I know the company needs to make money somewhere. In-app purchases are nice but you can easily play without them providing you have a city-like area nearby.

On the other hand, I kind of feel like we’re living in one of those kitschy futures where every single thing is commercialized as much as we’ll tolerate. You know, the kind where ads make eye contact with us when we pass by and ads play across our windshields at traffic lights. I would have been happier if Starbucks had just dealt for the Pokéstops and gyms without the empty promise of in-app drink ads. Isn’t having the stop enough incentive for people to hang out there?

What do you think? Have any of you guys managed to find this mysterious Pokémon drink?

Previous:Sony Just Bought the Film Rights for “A.D.: After Death”
Next: About These #dumpstarwars People – Have They Ever Seen “Star Wars”?